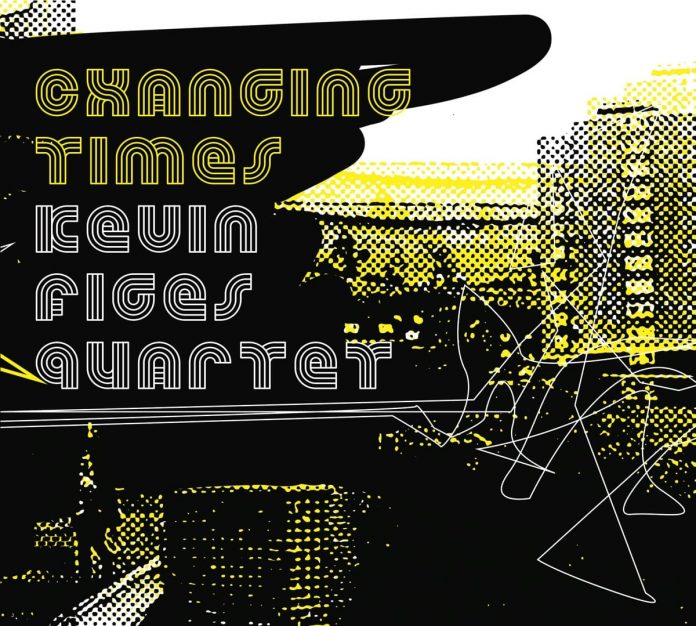 I’ve enjoyed the playing of saxophonist and flautist Kevin Figes on several occasions while visiting Bristol, where he is based. He’s an endlessly imaginative composer and improviser, making a great deal of absorbing music with his quartet. He has also composed for the big band Resonation, also based in the West Country, and he toured Portugal and Canada with the late pianist Keith Tippett.

This is Figes’ fourth CD as a leader, following the release of Circular Motion on Edition, and Hometime and Tables And Chairs on Pig.

A rippling arpeggio figure on the Prophet synthesiser – played by the excellent Jim Blomfield – ushers in the opening track Sea View, with the leader playing long lines on flute. It was inspired, says Figes, by the work of Soft Machine, the band which motivated him to graduate from playing rock to playing jazz. The same group is credited with inspiring the closing track, Toothpick, with Figes on alto and Blomfield this time on Fender Rhodes, underpinned by solid bass playing from Thad Kelly and drumming from Mark Whitlam. There’s a very fine but all too brief solo by Blomfield on this track – what an excellent player he is. It builds to a wild climax, the synthesiser underpinning the leader’s wildly spinning saxophone line.

These tracks form bookends to six more original compositions showing a wide range of inspiration: Strange Place is aimed at evoking the atmosphere of a horror film and has an effective wordless vocal line from Emily Wright. Kenny Wheeler’s writing for Norma Winstone is evoked here.

Stone Lion opens with a simple keyboard figure, and rather strange crackling in the background (like a badly worn vinyl LP, a curious effect which ends when Thad Kelly’s bass guitar leads the way to a rocky baritone sax theme and solo by Figes).

A perky solo flute line, doubled on keyboard, opens Radio Play, a composition inspired by the work of Paul Hindemith. It evolves into a very effective, spacious abstract passage with subtle percussion and interplay with the Fender Rhodes. The melodic ballad Soft Escape Bed features both Figes and Emily Wright singing the theme. Enid Dodd’s Ruler, another perky even-quaver piece with the leader on alto and a firm bass guitar line, is followed by the ballad Guiding Light, inspired by the work of Hermeto Pascoal, with a lovely line on soprano saxophone over Blomfield’s piano chords.

Xavi Reija: The Sound Of The Earth

Harry Colomby, a gifted teacher of English and Social Studies, taught at high schools in Brooklyn, Queens and Long Island, and died aged 92...

Daryl Sherman likes to do things the hard way. On July 16  – technically that’s incorrect because the witching hour was running for a...

After the interval during his first show at the New Victoria, Buddy Rich quoted from a note that had been sent backstage by a...

"I’ve enjoyed the playing of saxophonist and flautist Kevin Figes on several occasions while visiting Bristol, where he is based. He’s an endlessly imaginative composer and improviser"John WatsonKevin Figes Quartet: Changing Times
Advertisement