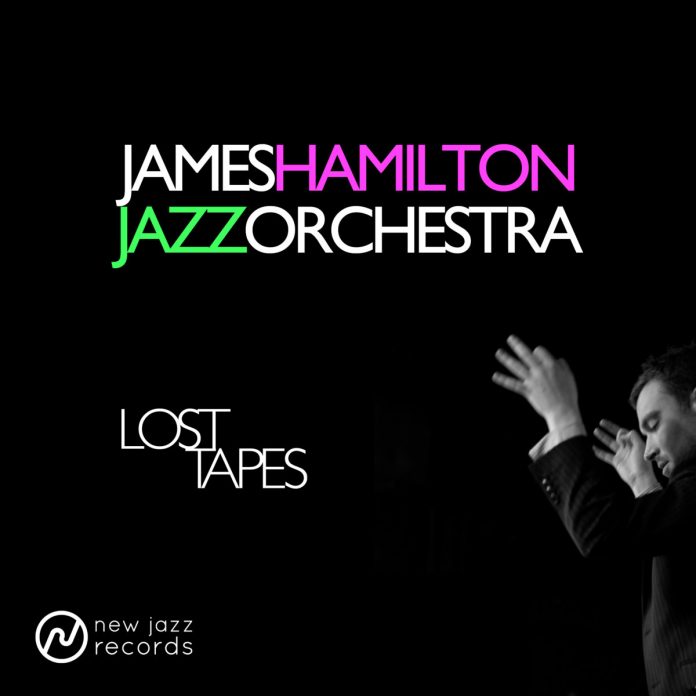 This is a lovely little gem of an album, demonstrating once again that vibrant, accomplished big bands can be found in the regions as well as London. Hamilton, born in Ulster, is a composer and trumpet player based in Leeds, the city which is the main location for these recordings.

He has several awards to his credit, including a British Composers Award and the John Dankworth Award for Composition. There are many fine players in the orchestra line-up, including the ever-energetic saxophonist Rod Mason, with whom musical fireworks are always guaranteed.

This album follows a trawl Hamilton conducted through his collection of recordings by the band, hence the lost tapes of the title. It’s the first in a planned series of releases by the band, from recordings which James says have been “gathering digital dust on a hard drive”.

The disc opens in dashing style with One Trip, a multi-layered and engaging piece, including a joyfully wild soprano saxophone solo. The soloists are not credited on the single sleeve of the disc, but my guess is that this is Mason in typically exuberant style.

Prayer is a slow fanfare, opening with mellow brass and woodwind, with thick, warm textures, before they are joined by dramatic cymbal splashes and a spacious piano solo from Jamil Sherif, accompanied by very effective tinkling bells before the saxes and brass return to bring the piece to a dynamic conclusion.

An Ending In Its Right Place has a joyful atmosphere, including a well-constructed tenor solo, opening punchily and then spinning into a flurry of passionate notes with the brass sections gradually driving up the temperature.

Sleep is another slow fanfare, mellow in tone (as the title might suggest), and with effective use of flutes in the ensemble. A trumpet solo sounds somewhat distant, the probability being that this is a live two-track recording and the balance could not be adjusted.

Hope Part 2 concludes the disc, fading in gradually on an ostinato pulse led by the guitar of John Kelly, and developing into a lively work with a raw edge, driven by punchy drumming from Dave Walsh.

This is a short disc (a few seconds under 30 minutes), but is available on CD or download for a very low price. See the link below.

The first of these albums is aimed primarily at children, as was the singer’s earlier I Believe In Little Things, which won a Juno...

The drummer Jimmy Cobb once said during an interview that he was just trying to get it done. "You have to be at the...

The tall figure of John Scofield and the posh Amsterdam hotel room are like fire and water. Dressed in jeans and a woodchopper shirt...

Author, musician and academic Julia Simon argues the case in her book that Alonzo “Lonnie” Johnson is inconvenient for scholars for a variety of...

Now 31, Guy Barker has been a professional musician since he was 20. Yet he could hardly be described as well known in his...

James Hamilton Jazz Orchestra: Lost Tapes"This is a lovely little gem of an album, demonstrating once again that vibrant, accomplished big bands can be found in the regions as well as London"
Advertisement