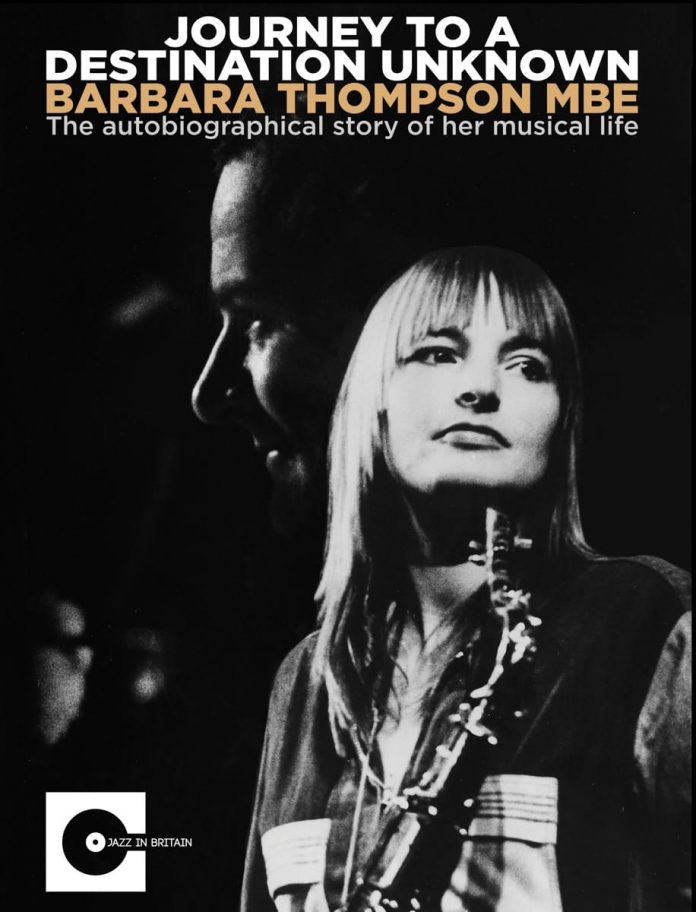 It is said that an autobiography is usually honest but never truthful. I am confident, however, that Barbara Thompson’s autobiography is both. As a musician she never fails to aim for the highest standards of musical honesty and integrity; and I doubt she would have it any other way in terms of her own life story.

This is a book written from the heart but with attention to detail. It recounts a fascinating journey from first musical encounters at the age of 10 with the clarinet to becoming a leading lady in British instrumental jazz, and from jazz-rock leader to accomplished composer of internationally acclaimed musical works. It covers her marriage to the late drummer Jon Hiseman, being an in-demand working musician and mum and the life-changing news that she had Parkinson’s.

The story is well written but not so polished as to lose some of the sharp edges that a good story should have. The abundance of photographs of both family and band(s), as well as fragments of fan mail and hand-written musical scores gives the book the feel of a private family photo album and treasured scrap book. This is to be applauded. All too often autobiographies are presented as sanitised versions of a person’s life. This is the opposite and I felt privileged to have been allowed to share some intimate and private moments with the author.

At the start of her career, Thompson was clearly walking a lone path as a female in a male-dominated world. With a few earlier exceptions (e.g., Kathy Stobart) the saxophone was the preserve of male musicians. The notion that a female could play as well or better than her male counterparts was not something to be taken too seriously. There was undoubted prejudice, discrimination and harassment. Thompson touches upon these but doesn’t try to make herself the heroine or the activist. When given the opportunity she is active in encouraging and supporting other female musicians – but in her typical unassuming way. Throughout her career she has led by example and proved (by talent and dedication) that she was just as capable as the best musicians in her field regardless of gender. Leading a band is a challenge at the best of times; but to be the female leader of all-male jazz bands for the majority of a working life takes guts and determination.

Her band, Paraphernalia (named after the title of a Wayne Shorter composition on Miles Davis’s 1968 album Miles In The Sky) has been her lifetime obsession and main musical vehicle throughout its many reincarnations. She was a regular member of Colosseum with Jon Hiseman, as well as working extensively with a variety of other musicians from different genres, including Andrew Lloyd Webber. In 1996 Thompson was awarded an MBE for services to music. It is thoroughly well deserved but I cannot help thinking that had Thompson achieved as much as she has done in any other form of artistic endeavour, she would be a dame by now.

Parkinson’s is clearly the worst news that a musician could ever be presented with. But it was not to be the end of Thompson’s musical career when that bleak diagnosis was presented to her back in 1997. Farewells and comebacks ebbed and flowed as her condition worsened but new medical treatments were discovered. The fact that Thompson was able to continue with live performances up to 2015 was a miraculous achievement. But once again that wasn’t the end of her career. It simply meant that more time was devoted to composition and the opportunity to put more of her classical training to good use.

The unexpected death of Jon Hiseman in 2017 was a devasting blow but she knew that he wouldn’t have wanted her to do anything other than remain creative. In September this year, Repertoire Records announced the release of Live At The BBC, a mammoth 14-CD box set of her work with the BBC. Composition still remains Thompson’s focus and there is a new album of her work due for release in early 2021 by the National Youth Jazz Orchestra as well as countless unfinished scores.

I closed the book with mixed emotions. A sadness that such talent was prematurely stopped from performing but immense admiration for a life well lived. The journey to a destination unknown continues but this is a welcome narrative to that fabulous journey so far. Highly recommended to both jazz fans and those who believe that life goes on.