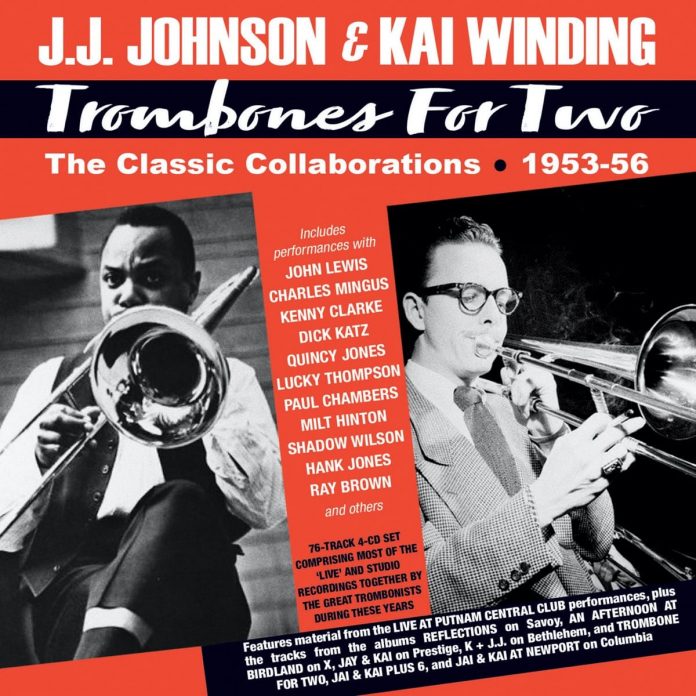 If, like me, you’re a trombone obsessive, then you can’t go wrong here, and the only qualification is the quality of some of the recordings, inevitably off their peak after so many years. But as ever Acrobat choose their material well, and there’ll be few complaints.

JJ was the first modern trombonist not to be influenced by Bill Harris, whilst Kai, first noted for his ecstatic and inspired wailing over the Kenton band (none of that here, sadly) was the leader of the Harris pack.

Both are comfortably at home in the famous Debut tracks, all nine of which (they run from Move to The Shrike), with their front lines made up from Jay and Kai, Bennie Green and Willie Dennis) are available here complete for, I think, the first time. Notable for roaring trombone, they also contain some most attractive and functional solo and accompanying piano from John Lewis.

But mainly this album belongs to Jay and Kai with interventions from some Quincy Jones groups including both, and the faultless two-part ensembles and inspired solos, assembled en masse, confirm what immaculate high standards they kept. Their finest duet album, the Bethlehem ’Nuf Said, which, like most of their duet albums featured the excellent pianist Dick Katz accompanying, is included complete.

Graham Colombé - 28 March 2019
No attempt has yet been made to release in a single set Ivie’s more than 60 recordings with Ellington together with the dozen titles she recorded after retiring from...