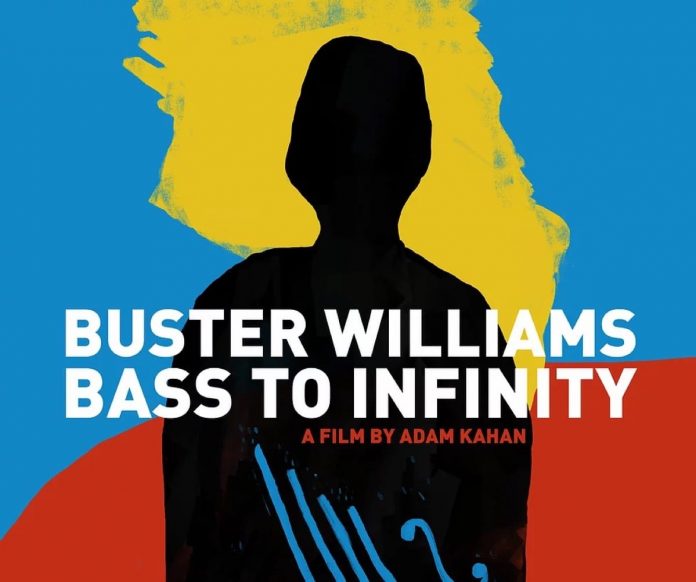 As deep as Buster Williams’ opening quote in this insightful film on his life is the seductive sound of his bass growling under his words. That unmistakable upright tone, the click and buzz from the strings, skids and slurs to the high register and signature octave jumps perfectly complement the 78-year-old enthusing about how jazz gives him the ability to express what’s on his mind, and interpret his thoughts and feelings through the music.

Whether Williams is waxing lyrical about music, his formative years growing up in New Jersey or his abiding fidelity to Nichiren Buddhism, Bass To Infinity pulls a lot of thought-provoking stuff from our man. Indeed, one comment, about his ongoing desire and ongoing search for musical spontaneity, leaves you feeling that maybe director Adam Kahan had the same motive for making this movie. There is a noticeably unpremeditated feel to the film throughout, most notably in some of the off-the-cuff conversations and improvised performance moments Buster shares with various musician friends.

Kahan’s film is pieced together with fantastic archive footage, candid interviews and animation as well as Kahan and crew following the bass veteran in and around his New York City where he converses with the likes of Christian McBride, bass enthusiast David Gage and vocalist Carmen amongst others. The stories of old are gold from the many legendary players featured and the music is naturally top drawer. From out of one particular tale from sax great Benny Golson (about a time he and John Coltrane were mistaken for dope scorers by Thelonious Monk in New York) comes a impromptu performance from Buster and Golson of Clifford Brown’s Tiny Capers, before the scene cuts to Williams calling in on fellow-bassist Rufus Reid for a chat and twin-bass play through Kenny Dorham’s Blue Bossa.

With the exception of a brief backstory segment from Williams on his first steps as a musician (and the motivation instilled in him by his multi-instrumentalist father), the story kind of begins in 1961 and our man landing a gig with Gene Ammons and Sonny Stitt. The use of brightly coloured scrawly animation here brilliantly paints the picture of the young bassist’s first experiences on the road. It also proves a striking visual contrast to the grainy archive footage and mostly darkened apartment and rehearsal rooms we see Williams in through the film.

Curiously, the Ammons and Stitt era of Buster’s career is a period the film often flips back to. Lengthy sections are also devoted to Williams’ extensive work with vocal greats such as Nancy Wilson, Betty Carter and Sarah Vaughan, experiences he freely admits left a major mark on his lyrical playing style, displayed here to great effect in a scene in which he accompanies Grammy-nominated vocalist singer Carmen Lundy through a stunning arrangement of Jimmy Van Heusen’s But Beautiful.

Elsewhere, Williams is seen reminiscing and rehearsing with pianist Kenny Barron and drummer Lenny White, humorously discussing his experience working with Miles Davis and breaking out some serious chops over an upbeat reading of Arthur Schwartz’s Alone Together with pianist Larry Willis. The great Herbie Hancock also makes an appearance, albeit just as a talking head, and spins some interesting stories interspersed with footage of Williams playing with the infamous Mwandishi band from the early 1970s. “When Buster plays, you’re not hearing the bass, you’re hearing Buster” insists Hancock, describing Williams as the engine of that band over a remarkable clip of the bassist soloing over Hancock’s classic Toys.

Like many documentaries made about musicians of a certain vintage, there are undoubtedly areas or eras of the subject’s life neglected or left on the cutting room floor. But while some Buster buffs might be miffed by the non-mention of his numerous solo records, the late 70s discs he recorded with Ron Carter and the stunning contributions he made to albums by Chet Baker, Woody Shaw, Geri Allen, Terence Blanchard and Quincy Jones, this intimate portrait certainly covers enough ground to please purists and tourists alike and to inspire deeper investigation of this unique musician.

Buster Williams: Bass To Infinity (Virgil Films) is available to purchase or rent from Vimeo, Apple and other outlets. See busterwilliamsmovie.com.