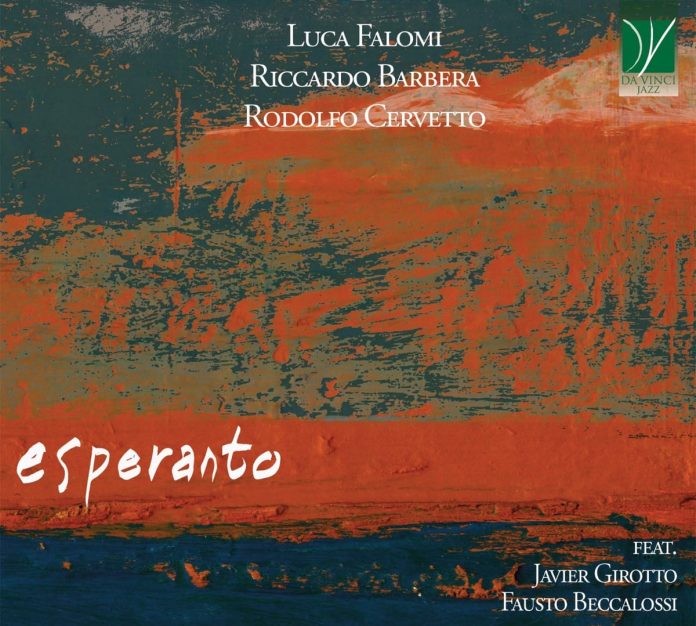 Created by Polish ophthalmologist L. L. Zamenhof in 1887, Esperanto is the most widely spoken constructed international auxiliary language. As the liner notes state, “Esperanto was the attempt to relate different languages to a lexical and grammatical common denominator thus assuring a basis for communication to as many people as possible. This sounds as if it were the outline of jazz events.” Thus, Esperanto is a highly apposite title for this album and arguably for jazz too as the music presented here undoubtedly crosses musical boundaries and borders.

This trio of gifted musicians is based in Genoa, Liguria but their collective style could hail from anywhere. Guitarist Luca Falomi is classically trained but his style has evolved to cover a much broader canvas. His colleagues equally provide much more than a rhythm section as witnessed, for example, by bassist Riccardo Barbera’s ability to tease out mirroring melodies to accompany the tunes outlined by Falomi’s guitar. The trio produces an unusual mélange of music self-characterised as Latinesque.

Certainly, this is not your average chamber jazz trio, even though at times there is a tendency towards this; L’Amore Che Non Osa is even augmented by a string trio. Guest soloists appear on three tracks, Fausto Beccalossi plays accordion and the juxtaposition of that instrument and the acoustic guitar is very effective in a folky kind of way. Similarly, Javier Girotto’s soprano sax solo on Full Circle is highly engaging but tantalisingly signposts what might have been if the trio had opted for a quartet scenario throughout.

That’s not to say the album is lacking as it certainly has its moments. The obvious outlier though is Falomi’s composition The Moove, where he abandons the acoustic in favour of a total wig-out on electric guitar. In that vein, on Cutting Wind, Falomi multi-tracks acoustic and electric guitars to good purpose.

Andy Hamilton - 16 June 2019
What opened my ears and eyes to Harrell was an extraordinary performance by his quintet at the Koktebel Festival in Crimea, featuring the same drummer as here, Johnathan Blake,...