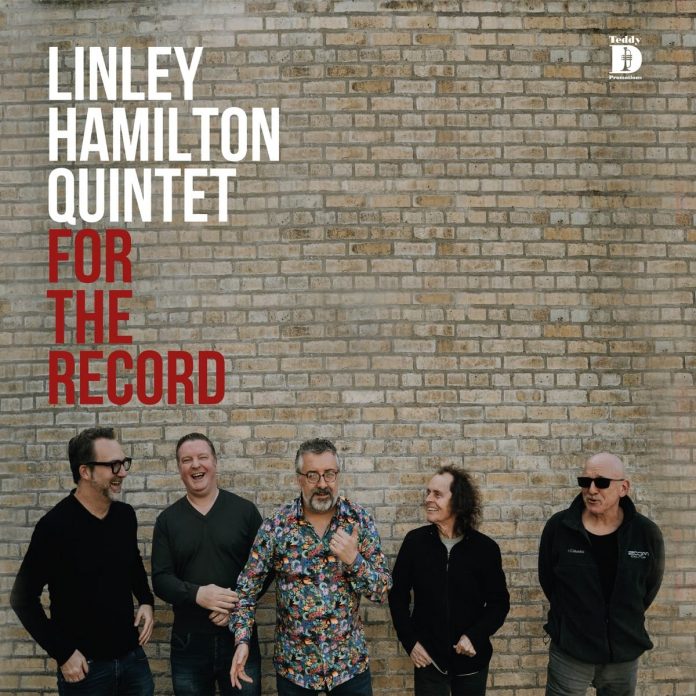 Linley Hamilton has been a key member of the Irish jazz scene for many years. He’s described as “the most prominent trumpeter in Ireland” on the press sheet for this album, but he’s more than that – he’s a bandleader, a sideman to leading performers including Van Morrison and Eleanor McEvoy, a composer, a BBC broadcaster and, with a PhD in jazz performance, an academic with a teaching role at the University of Ulster Magee.

On For The Record Hamilton brings together two fellow Irish musicians – keyboard player, chief composer, arranger and co-producer Cian Boylan, and saxophonist Derek O’Connor – with the US rhythm section of Mark Egan on bass and Adam Nussbaum on drums, to form a quintet to interpret a mix of original tunes (mostly credited to Boylan) and a couple of covers including Paul McCartney’s And I Love Her.

After a delicate piano introduction from its composer For The Record gets under way in powerful style with Boylan’s driving, uptempo Right Angle. Everyone gets the chance to display their high-energy chops on this number, with tenorist O’Connor proving to be an especially hard-blowing player while Nussbaum’s muscular drumming at times threatens to overwhelm everyone else.

Split, a Hamilton/Boylan tune with Boylan on organ, almost matches the opening track for power, but brings a little more swing to proceedings. It’s an immediately likeable, catchy tune. Egan’s Sea Saw is a mid-tempo number that showcases both Egan’s fluid electric-bass style and Hamilton’s thoughtful and melodic playing.

Hamilton and Boylan also co-wrote the joyous Holly’s Moment, both in celebration of O’Connor’s baby daughter and as a memorial to his late sister Maureen. The quintet’s calmer, more restrained, side is ably shown on Mo’ Hip, a gentle but swinging tune that’s credited once again to the pianist and centres on an outstanding solo from Hamilton, and Nussbaum’s bluesy Sure Would Baby.

All in all, an enjoyable set from a band that readily communicates the obvious fun they had in the studio.

Find out more about Linley Hamilton recordings at linleyhamilton.com/music/discography

Previous articleSchapiro 17 – New Shoes: Kind Of Blue At 60
Next articleGeorgia Gibbs: The Kiss Of Fire – Her 29 Finest

Rather like the gift of socks and hankies, unwrapping volume VI of Christmas songs from Landgren and chums was fairly predictable, but no less...

Half a century on, the R&B warhorse that is Tower of Power is going strong, its hallmark horn sound and repertoire still impressive and...

The honest glasses and sober dress suggest a visiting minor academic rather than a distinguished jazz soloist. No matter, for Al Cohn's reticent bandstand...

"All in all, an enjoyable set from a band that readily communicates the obvious fun they had in the studio"Bruce LindsayLinley Hamilton Quintet: For The Record
Advertisement