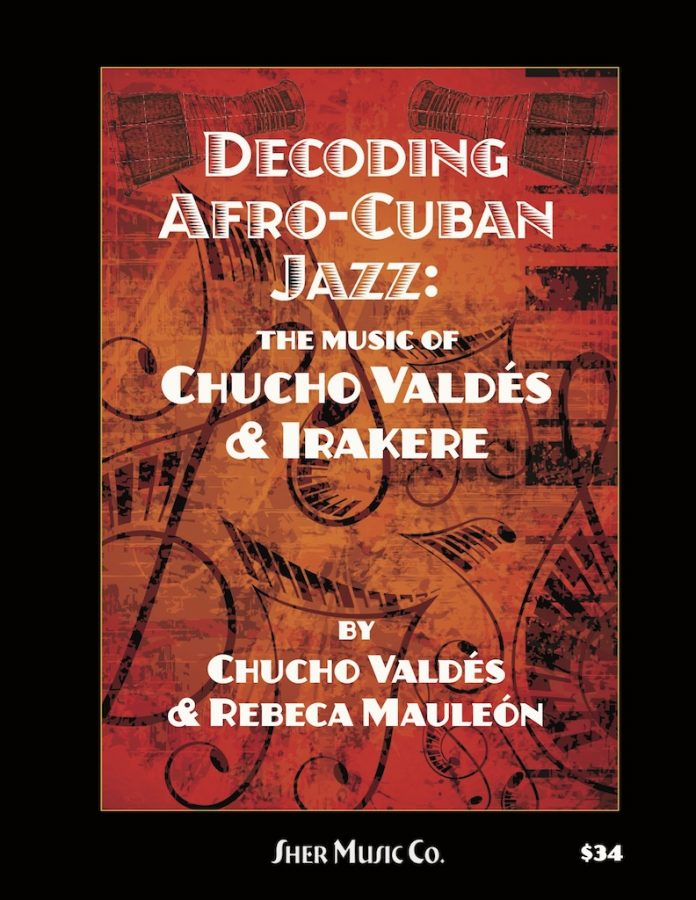 This could quite easily have been separated into two very worthwhile and possibly more detailed books – one explaining the complexities of Afro-Cuban Jazz, and the other celebrating the work of Chucho Valdés and Irakere. As it stands it’s a very interesting and useful publication trying to serve those two purposes, but not on a particularly even footing.

Chucho Valdés shouldn’t need any introduction to the jazz audience, and his co-author Rebeca Mauleón is a pianist and eminent author and educator in the field of Cuban music, so as a collaboration it seems like a very good fit. With the exception of pages 65-86, pages 37-169 are devoted to Valdés, his band Irakere, their songs, and a very interesting Q and A with Valdés entitled Questions For The Maestro (further details below). There follow a discography, bibliography, glossary and then three appendices – the first an Afro-Cuban rhythm glossary, followed by an annotated list of works, a list of referenced audio recordings, and finally an index.

For each of the 11 Irakere songs we’re given a background, a basic musical analysis, and in the case of El Tata Cimarrón there’s also a short transcribed fragment. Then, for each of the songs, there’s a lead sheet with the transcribed melody, chord symbols and the form for the head (melody) and solos, together with the lyrics where applicable.

Prior to this detail on Valdés and Irakere, we have an informative couple of chapters – the first giving an overview of the music of Cuba, and the second a more detailed look at the Cuban clave (with numerous notated examples) which according to the book “…in the simplest terms, can be best described as a rhythmical pattern (there are several varieties), an instrument (referred to in plural form as “claves”), and a guide that affects how all of the rhythmical, melodic and even harmonic components fit together”.

One of my favourite parts of the book is the aforementioned Q and A with Valdés, where he responds to many questions from a poll of “…several hundred young music students and jazz musicians, many of them working professionals, on the challenges of delving into Afro-Cuban jazz from a pedagogical perspective”. Here are a few examples:

Q: When you compose, do you begin first with the melody or the rhythm?

A: Great question! Generally, I begin with the melody; not always, but maybe 95% of the time I hear a melody first. There are times when I deliberately choose to create a melody based on the harmonic progression of a standard (such as Stella By Starlight or I’ll Remember April), or to focus on a particular rhythmical style or genre, but it’s usually melody first for me”.

Q: How would you describe the Cuban musician’s approach to the time or the feel in the music?

A: I’d say it has to do with both where we feel the pulse (on the downbeat vs the backbeat, for example), and also how we internalize the clave as we play. For most of us, I’m sure it’s not always a deliberate thing, but more of an extension of how our music needs to feel in order to motivate the dancing public, for example.

A: I think the influence has primarily been a rhythmical one. Take for example the work of Chano Pozo with Dizzy Gillespie, with Chano bringing Afro-Cuban rhythms into the jazz big band, which created a new and different sound in jazz. I think this is the most significant influence, more so than say melodic or harmonic elements, and because of the many varieties of rhythms and genres that we have – from the son, mambo, cha-cha-chá, rumba, danzón, bolero, etc”.

Overall, this publication is well worth a look, particularly for those seeking a better general understanding of Cuban music, largely via the music of Valdés and Irakere. For those seeking more detail on the elements of Cuban music, Mauleón has published several books on Cuban music performance practice, including the Salsa Guidebook, and 101 Montunos, as well as serving as co-editor of The Latin Real Book (all for Sher Music).

Michael Tucker - 19 July 2021
One of many special memories I have from the Ystad, Sweden Jazz Festival is of a standout performance in 2014 by the American, now Danish-domiciled bassist and vocalist Kristin...