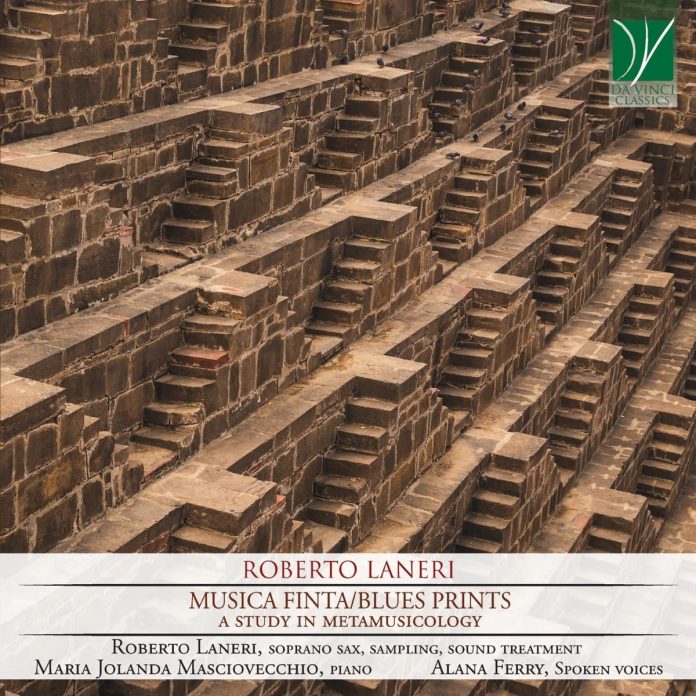 The subtitle to this album from saxophonist Roberto Laneri, pianist Maria Jolanda Masciovecchio and spoken word performer Alana Ferry is “a study in metamusicology”. There’s a description of the music too – “variations with themes by Schumann, Joplin, Schubert and Jelly Roll Morton” (lest there be any confusion, that’s Scott Joplin, not Janis, and Robert Schumann, not Clara). There are five tracks here, each one subdivided into anywhere between three and seven sections which are mostly prosaically named to indicate the composer whose work acts as the inspiration for that section (SCHUM 1, SHUB 2 or JOP3, for example).

Ferry’s introduction to the Prologue confuses things a little, as instead of “metamusicology” she intones “This is a study in metaphysicology [sic]”: at least, that’s what it sounds like, but her voice is altered electronically, as it is on other occasions when she appears, so that she sounds like Laurie Anderson on O Superman, or Will Powers on Kissing With Confidence. When her voice is unaltered – as it is on the opening to Jelly Roll, The Spanish Tinge – her sense of drama and her enthusiastic delivery give the narrative a genuine excitement.

Laneri has recorded with Charles Mingus and Peter Gabriel, has a series of albums as leader and has written books on overtone singing: nowadays, so the sleeve notes tell us, his music “defies definitions and current space-time dimensions”. This description suggests something much more unusual and unclassifiable than the music on offer here – but then this recording was made in 1998 and so may be unrepresentative of the work he’s undertaking today.

Masciovecchio and Ferry are more mysterious. There’s no information about Ferry on the album and an internet search shows no other recordings. Masciovecchio has performed at festivals with Laneri and has studied fortepiano and harpsichord, but as with Ferry this seems to be her only recording to date.

On Musica Finta Laneri draws on inspiration from Sidney Bechet, Jelly Roll Morton and Louis Armstrong, as well as the composers whose works he reinterprets. Given that Laneri’s instrument of choice is the soprano saxophone it’s unsurprisingly Bechet’s inspiration that is the most obvious, and the blues is a strong presence on much of the album, including some of the samples (which are, sadly, uncredited, but range from chants to spoken-word narratives to acoustic blues phrases). Masciovecchio plays beautifully throughout the record. Her performances of the tunes based on Joplin or Morton’s compositions are expressive, joyous and sensitive, often eclipsing Laneri’s own contributions.

Derek Ansell - 04 February 2020
A well-regarded tenor soloist who has worked with many top band leaders, including Horace silver, Quincy Jones, Freddie Hubbard and the Bill Holman Orchestra, Webb here links up with...