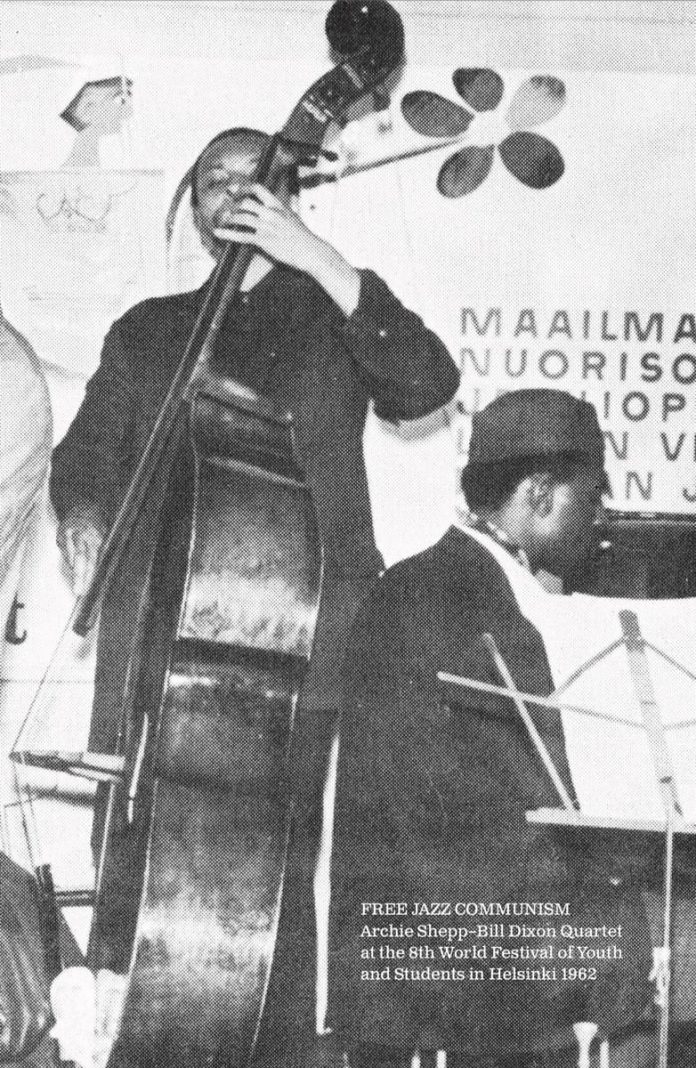 Focusing on the Archie Shepp – Bill Dixon Quartet and their performance at the 8th World Festival of Youth and Students in Helsinki 1962, Free Jazz Communism analyses the significance of jazz in the political and social developments of the era, and how this performance “distorts the whole ideological construct of the international political mandate of jazz music”. Edited by Sezgin Boynik and Taneli Viitahuhta, the introduction explains how, in the middle of the Cold War, an avant-garde jazz festival in Finland exemplified an alternative view of free jazz.

Their contention is that the common view of jazz as representing Western notions of freedom and identity is challenged by this performance, as the avant-garde found acceptance and celebration in the socialist bloc. In short, Shepp and Dixon’s performance at the festival coincided with a seismic global power struggle, and Boynik and Viitahuhta argue that the narrative of jazz as inherently tied to perceived Western cultural freedoms is incorrect, and their attendance in Helsinki is “evidence of the collective spirit of true international solidarity”.

The following eight chapters from various authors explore this premise through examining archival material such as interviews and correspondence, as well as critical historical accounts of the festival and the events leading up to and following it. For example, Viitahuhta’s own chapter examines how the atmosphere and culture of Finland provided an unlikely yet essential backdrop for the festival; closely tied to the post-war communism of the Soviet Union, yet with a thriving youth movement and even some shady influence from the CIA, it became the flashpoint for political and artistic expression and debate.

Other chapters cover topics such as eyewitness accounts of the festival, a brilliantly extensive examination by Boynik of Archie Shepp and free jazz, and how they relate to the history of jazz and the political and cultural theory of the 20th century, as well as the two editors’ own 2019 interview with Shepp himself. Of particular interest is the penultimate chapter, I Will Not Let You Misconstrue Me, which presents three of Archie Shepp’s own writings, including two published in Downbeat in 1965 and 1966, which provide an extremely insightful look at his views on jazz, art, race and Western culture.

A detailed and comprehensive book, it is an essential read for anyone interested in Archie Shepp and his music. However, with its emphasis on the relationship between jazz and wider global developments of the time, Free Jazz Communism also provides an indispensable account of the political and social dynamics of free jazz in the Cold War era. It can be purchased on the Rab-Rab press website for €25.

Graham Colombé - 10 May 2019
Ivan Hussey, son of a Zimbabwean father and English mother, founded the group called Celloman almost two decades ago but until now his cello has been one of several...