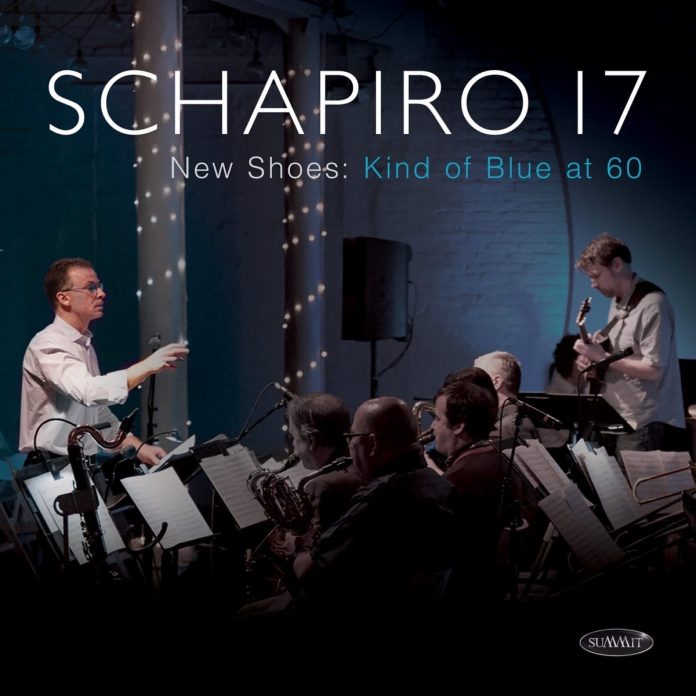 This is a hugely ambitious and brilliantly realised interpretation of one of the music’s most cherished albums – Kind Of Blue. Jon Schapiro has assembled an ensemble of consummate readers, able to interpret challenging scores, who just happen to be top-drawer soloists.

Themes from the original album are treated with the respect that classics deserve but the leader’s inventive arrangements give each a totally fresh look while retaining their creative essence.

So What begins with a vamp from pianist Roberta Piket over crisp brushwork from Jon Wikan while the baritone, bass trombone and guitar hint at the delicate impressionism Bill Evans created for the intro on the original. Trombonist Alex Jeun plays freely over a repeated ensemble figure followed by Rob Wilkerson on soprano who stretches out on the familiar modal sequence.

There is some lyrical alto from Ben Kono who has Blue In Green all to himself before he is joined by Andy Gravish, Nick Grinder and Sebastian Noelle on trumpet, trombone and guitar for some arresting polyphony. All Blues moves between waltz time and 4/4 creating tension and release with some hard-driving solos from Paul Carlon, Alex Jeun and Eddie Allen along the way. Flamenco Sketches becomes an extensive feature for Sebastian Noelle in a bravura guitar performance that runs the gamut from Kenny Burrell and Wes Montgomery all the way to Jimi Hendrix.

Freddie Freeloader (a colourful street-character who had been Billie Holiday’s cook) was the only title performed by Wynton Kelly on Kind Of Blue. Schapiro really puts the band through its paces here with constant tempo changes for the soloists to negotiate and Matt Hong makes a spectacular contribution on baritone. He is a veritable force-of-nature from the Nick Brignola school of hard-swinging excellence on his five choruses.

Interspersed with the Miles material there are a number of Schapiro originals titled Boiled Funk (an anagram for Kind Of Blue) some of which reflect the give-and-take of a Charles Mingus ensemble. This is particularly noticeable on Boiled Funk 4 which opens with a powerful, unaccompanied figure from Matt Hong calling to mind Pepper Adams’ unforgettable introduction to Moanin’ from Mingus’s 1959 Blues & Roots album.

Roger Farbey - 08 January 2020
Frank Zappa’s Hots Rats, released in 1969, was arguably one of the most important records in the history of popular music. In his book Zappa And Jazz (Matador, 2015)...