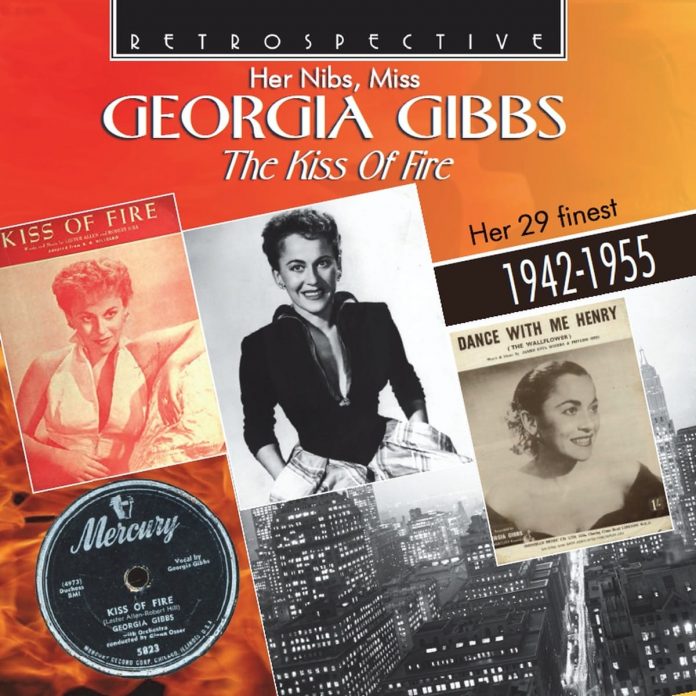 When she began performing professionally, at first under a different name, Georgia Gibbs was still a teenager (her birth date is somewhere between 1918 and 1920). This was in 1936 and she was recording almost from the start. Among those with whom she appeared live and sometimes on record dates are the Hudson-DeLange Orchestra, Hal Kemp, Frankie Trumbauer, Artie Shaw and Tommy Dorsey.

Of the selections gathered here, only one track dates from this early period, 1942’s Absent-Minded Moon with Shaw. The rest come from the early 1950s, by which time she was an established solo artist on radio, where she acquired the nickname “Her Nibs, Miss Georgia Gibbs”, and was regularly ringing up hits.

Peter Dempsey’s notes indicate that in the period covered by this album, there were 24 that entered the Top 30. Thirteen of these songs are included here, two of which made the top spot: The Kiss Of Fire and Dance With Me, Henry. Several of these hits were also recorded by singers who are, perhaps, better remembered today. These are often referred to as covers, although Gibbs was insistent that her versions were very different in form, structure (and sometimes lyrics).

Some of the songs she sang were pop, including Cry, famously linked to Johnny Ray, while others were favoured by R&B singers, among them Tweedle Dee and Dance With Me, Henry, which were recorded by Lavern Baker and Etta James respectively.

A strong, confident singer, Gibbs is forthright, sometimes brassy, in songs that need urgency, yet can sing with eloquent charm on songs such as While You Danced, Danced, Danced and Say It Isn’t So.

In an interview with Greg Adams a few months before her death in 2006, she expressed a preference for ballads rather than what she referred to as “the ‘up’ stuff”. Listening afresh to her, it is plain to hear that Gibbs was at least the equal of bigger names.

On 20 tracks, Gibbs is accompanied by Glenn Osser’s orchestra; other backing groups include those led by Bob Crosby (Play A Simple Melody, on which he duets with Gibbs), Bob Haggart (I Don’t Care If The Sun Don’t Shine), and Max Kaminsky (If I Knew You Were Comin’).

Ten years after the last of the recording dates heard here, Gibbs made her final album and then retired, thereafter living part of each year in Italy, with her husband, historian Frank Gervasi. Following his death in 1990, she lived in New York.

A very entertaining album, offering a great deal more than a nostalgic stroll into the past.

Discography
The Kiss Of Fire; Absent-Minded Moon; If I Knew You Were Comin’ I’d Have Baked A Cake; I Don’t Care If The Sun Don’t Shine; Play A Simple Melody; Red Hot Mama; While You Danced, Danced, Danced; Cherry Pink And Apple-Blossom White; Cry; My Old Flame; My Favourite Song; The Photograph On The Piano; Say It Isn’t So; Seven Lonely Days; He’s Funny That Way; Baubles, Bangles And Beads; Under Paris Skies; I Love Paris; Somebody Bad Stole De Wedding Bell; It’s The Talk Of The Town; My Sin; Whistle And I’ll Dance; The Man That Got Away; Ballin’ The Jack; Tweedle Dee; Dance With Me, Henry (Wallflower); Sweet And Gentle; I Want You To Be My Baby; Kiss Me Another (79.18)
Gibbs (v) with various accompaniment, mostly Glenn Osser and his Orchestra. Los Angeles, Chicago, NYC, 1942, 1950-6.
Retrospective 4375

Previous articleLinley Hamilton Quintet: For The Record
Next articleDavid Sanborn: Anything You Want – The Warner, Reprise, Elektra Years 1975-1999

Martin Archer is one of the heroes of British music. He’ll be best known to some as a member of Hornweb, but having more...

An excellent local record. It is my guess that it stands a very good chance of featuring in next year's list of poll choices....