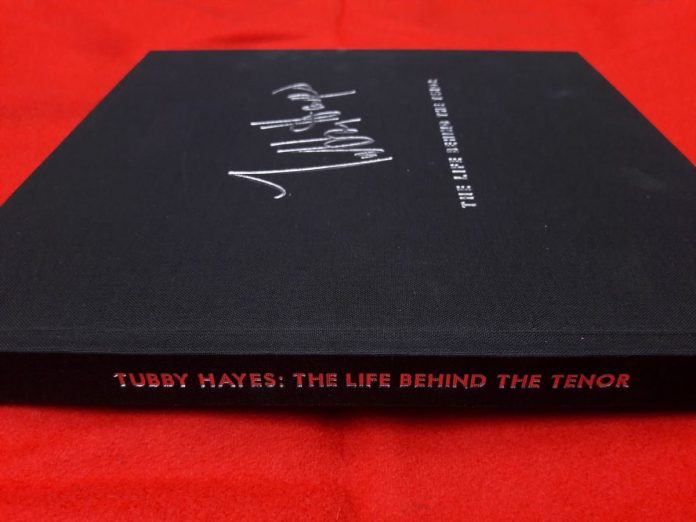 Mark Baxter, the writer and producer of the Tubby Hayes documentary, A Man In A Hurry, is the driving force behind Tubby Hayes – The Life Behind The Tenor, a limited-edition book that brings together images of Hayes memorabilia ranging from photos of toddler Edward Brian “Tubby” Hayes with his parents to a picture of his memorial stone at Golders Green crematorium.

Baxter describes himself as the book’s curator, rather than its author, and wrote the introduction. Lee Cogswell, the director of A Man In A Hurry, took most of the photographs, while Tubby’s biographer Simon Spillett wrote the foreword and some of the captions and annotations. There’s an afterword, too, from Hayes’s son Richard who, along with Spillett, provided the bulk of the artefacts and memorabilia.

Tubby Hayes – The Life Behind The Tenor is a beautiful object, a 240mm square hardback bound in black cloth, with bright orange endpapers to the front and bright green to the rear, including around 150 images and limited to 100 copies. Given that the book costs over £100, however, it’s not perfect. The photographic reproductions are at times rather too dark, which makes it hard to decipher some of the more detailed documents: a letter from Hayes’s mother to “Dear Brian,” for example, or the Melody Maker obituary, or a lengthy typed letter from his wife. There are a few errors in the nine or ten thousand words of text as well. One or two stand out: a reference to Tubby’s court appearance as his “trail” and two mentions of a musician called Thelonius [sic] Monk.

The committed Tubby Hayes fan or jazz historian may well forgive these issues. The real magic of the book is the insight given by the images into Hayes the man, as well as Hayes the musician. Family snaps reveal a cheery, wavy-haired toddler; a serious-looking schoolboy posing in boxing gloves; a youthful musician blowing his first tenor sax. There are a couple of wedding photos from his first marriage, to Maggie Yates, but, tellingly, no photo from later in their married life and no pictures of Hayes and his second wife, Rose. There is, however, a photo of Hayes and his last partner, Liz Grönlund, who was with him until his death in 1973.

There are plenty of insights into Hayes’s working life: press cuttings and photos from his personal scrapbook, diary pages, contracts, awards and passports, even a couple of shirts and a pair of slippers from his 1970s wardrobe – and for anyone unsure if the nickname “Tubby” was an appropriate one, the photo on page 65 should clarify matters. The final section of the book features cover images from Spillett’s biography and the DVD of A Man In A Hurry, along with cartoons and paintings by Steve Millington and Ed Grey.

This is a celebration of Tubby Hayes, but not one that brushes over his domestic or professional problems. Although Baxter notes that Tubby was “always a top earner” he also acknowledges that much of that money went to pay for drugs and plenty of these images show that being a top earner in jazz was not a guarantee of financial security.

A letter from his accountants reminds Hayes that he failed to keep an appointment to sort out tax affairs and also notes that a payment can be made to Inland Revenue because “your Father provided me with a cheque for £500”. Baxter captions the image with an uncredited quote from George Harrison’s Taxman, although while Harrison moaned about paying 95% tax from personal experience it’s not a problem Hayes was likely to have shared. A royalty statement covering an unspecified period in 1970 shows that for two tunes, Mexican Green and 100 Per Cent Proof, he earned a total of seven shillings and seven pence. A handwritten note from Rose pleads with him for money: “The children are getting very shabby … I can barely afford to feed them …” Tubby replies that he’ll “pay up as soon as it is at all possible …” once he’s paid money to the taxman and his landlord.

Towards the end of the book a diary entry for 23 October 1972 states simply “Phil’s funeral Golders Green Crematorium” – drummer Phil Seamen had died on the 13th. Tubby was at the crematorium again less than a year later, on 8 June 1973, this time for his own funeral. The following March, the crematorium director wrote to Mrs E. G. Hayes, chasing the outstanding payment of £178.53 for Tubby’s memorial stone. Altogether, a poignant set of images from the many fine reminders of Hayes’s life contained within this book.

Tubby Hayes – The Life Behind The Tenor is for sale in a limited edition of 100 numbered copies, each one autographed by Baxter, Spillett, Cogswell and Richard Hayes. Copies can be purchased from Mark Baxter. For details, email mono_media@hotmail.com.