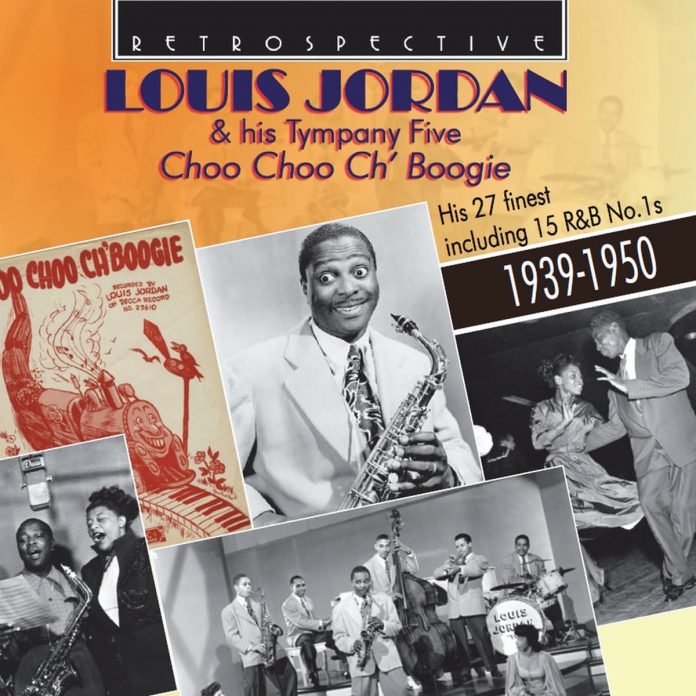 Stop bouncing around, snapping your fingers and joining in the choruses for a minute and consider this: Louis Jordan was number one favourite with black GIs throughout World War II – above Basie, Nat Cole, Fats Waller or Lena Horne (well, maybe not her). He came across as the kind of guy it’s fun to have around, waggish, incorrigible, forever explaining the events of the previous night to the judge on the morning after. Add to this a tight little band, full of snappy riffs and swinging like the proverbial bitch, and you can understand what made Louis Jordan and his Tympany Five such an irresistible attraction.

The title number of this compilation is a little masterpiece. It has all the above qualities, plus an important attribute that’s often overlooked: every word of this very wordy song is clear and totally comprehensible to anyone who understands English. That’s what lifted so many of Jordan’s records beyond the R&B charts into he realm of everyday popular music. Caldonia, Ain’t Nobody Here But Us Chickens, Is You Is Or Is You Ain’t? made it, along with many others. If they hadn’t, they wouldn’t have been on the BBC Light Programme, and I wouldn’t have taken them to heart at an alarmingly early age.

This is a good selection from the best and most typical of a sizeable output. Like most Decca artists at the time when Milt Gabler was in charge, Jordan occasionally found himself doing a few numbers with one of his fellow stars. By far the best here are the ones with Ella Fitzgerald, especially Stone Cold Dead In The Market. Ella’s Caribbean accent is quite convincing, whereas Jordan’s is terrible, but Wilmoth Houdini’s tale of richly deserved domestic revenge is a gem. There’s a nice one with Louis Armstrong, too , and a not entirely comfortable one with Bing Crosby.

Louis Jordan died in 1974, aged 66. If he could have hung on for another 20 years he would have been a star all over again, without having to do anything. Clarke Peters’s show, Five Guys Named Moe, ran four years in the West End, followed by a couple more on Broadway. There was a successful revival in 2010 and, had it not been for this bloody virus, another revival would be launching just about now.

But these 27 tracks are the genuine, guaranteed originals and nothing could ever replace them. Believe me, I had literally to turn the player off before I got down to writing this, or I’d still be bouncing around and snapping my fingers.

I've been hearing some excellent Canadian music lately – including jazz from Brodie West and now Mark Segger. This is the second album by...

Meredith d’Ambrosio should be far better known. Pianist, singer, composer, lyricist, teacher, calligrapher and artist she is a true renaissance woman who was frequently...

Having grappled with an item from the Listener’s Companion series, I now meet up with the Oxford Studies in Recorded Jazz. Seven titles to...

The Jazz Centre Society's 'Winter Ceres' of concerts got off to a great start on September 12th, when the following line-up presented an exhilarating...