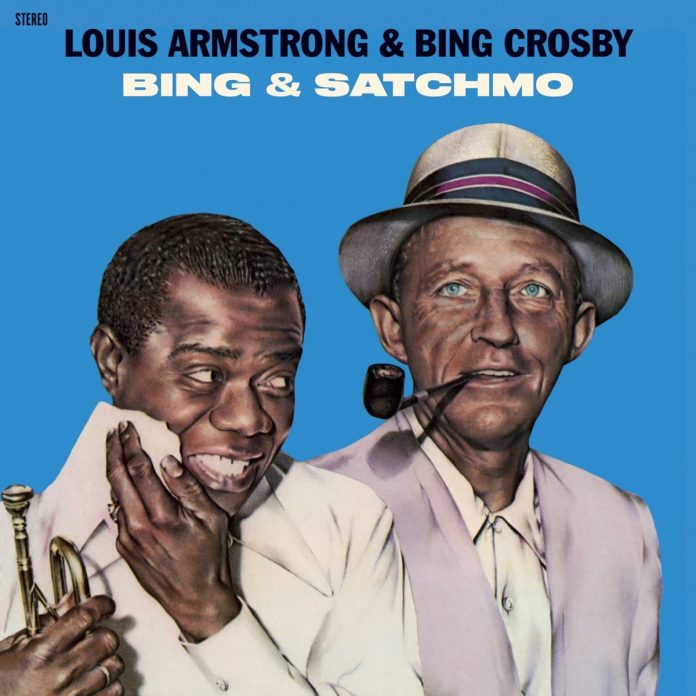 Even though they must have spent hundreds of hours performing and exchanging banter on Crosby’s radio and television shows over at least a couple of decades, this is the only album this pair ever made together. It’s the lightest of light entertainment, but they were both so stupendously good at what they did that I’ve played it through four times now and felt cheered up on each occasion.

And yet I know that, to some extent, it’s an illusion. The two of them singing and joking, Louis blowing the odd chorus, the band, the harmony singers – it sounds more like a party than a recording session, and a party is what it’s supposed to sound like. But, in fact, the band and the singers were in Los Angeles, Bing and Louis did their stuff a week later in New York and Louis came in a couple of days after that to lay down the trumpet bits.

I only found this out by checking with Hans Westerberg’s Armstrong discography, and I reveal it now, not to belittle an album which will continue to cheer me up, but to point out that the instant and total creativity which jazz lovers are encouraged to expect from their musicians does not necessarily apply in all cases.

What this elaborate production delivers in bucketloads is a quality now rarely found in popular music which I can only call good humour: not comedy, not even jokes really, just friends in relaxed mood. By all accounts, Crosby and Armstrong did get along well and their act seems to have emerged from this over the years.

Among the extras included here is their sublime Gone Fishin’, from 1951. There are also three numbers with the All Stars, taken from the soundtrack of the film High Society. I don’t have a copy of the original album for comparison, but this vinyl sounds fine to me.

Simon Adams - 31 October 2019
Not for the first time with an ECM album, some help might be needed to identify the various instruments. The leader’s nyckelharpa is a traditional Swedish keyed fiddle with...