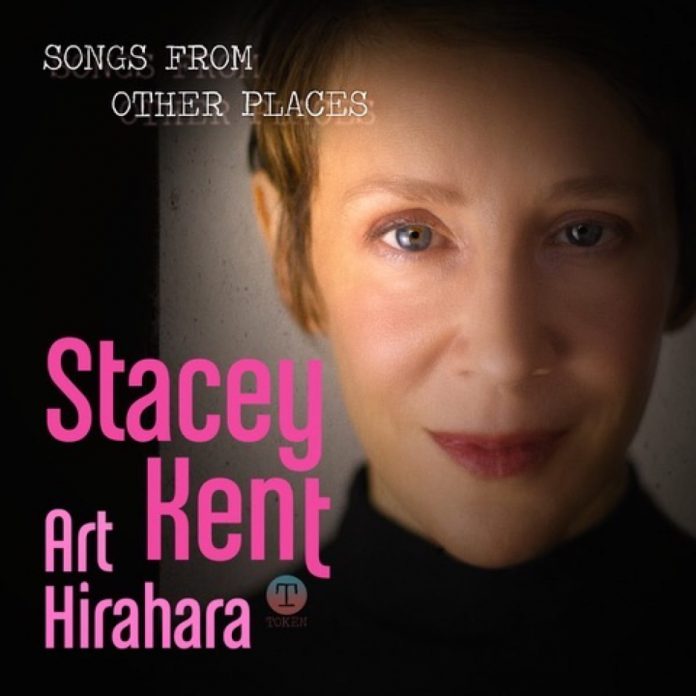 These 10 songs were recorded during lockdown and first released, one at a time, as digital singles. Each, in its own way, reveals the universal longing at that time for movement, travel and the outside world – the “other places” that the songs come from. It’s hard to believe that even the two performing artists, Stacey Kent and pianist Art Hirahara, were confined hundreds of miles apart. (See Stacey’s interview with Trevor Hodgett). The rapport between them is perfect, and all the more remarkable because their individual parts were recorded at different times.

The opening song, I Wish I Could Go Travelling Again, sets the theme for this cleverly chosen and absorbing album. It’s one of three pieces here written by the novelist Kazuo Ishiguro and Jim Tomlinson, Stacey’s husband and creative partner. The songs work very well in this context, particularly the lively Tango In Macao.

Among others, there’s My Ship, by Kurt Weill & Ira Gershwin and Paul McCartney’s mysterious Blackbird, which I’ve always found strangely moving, although I don’t know why. Two Jobim pieces, one sung in English and the other in Portuguese plus a French song, Les Voyages, remind us that Stacey Kent is a truly international artist.

And perhaps we need reminding of this, since her career began here in Britain, where she is still widely thought of as a jazz singer specialising in classic American song. It’s not that she has abandoned the famous Song Book – or jazz, come to that – but added a whole lot more of both music and language. She is, after all, a graduate in comparative linguistics.

It seems to me that, in her career she has followed a similar path to Cleo Laine, who started in jazz before moving into broader fields, in her case musical theatre, from Showboat to Pierrot Lunaire, without letting go of her devotion to jazz. In John Dankworth, Cleo also had a creative partner as husband.

And one last thing. Art Hirahara sounds like a superb jazz pianist. I’ve been told that he has made several albums of his own. Anybody know about these?

Jazz Journal - 03 August 2020
Morrissey-Mullen Band / Holdsworth and Co / Paraphernalia Starting with Morrissey and Mullen, the programme seemed destined to a warm response, and although I found their material a little drawn...