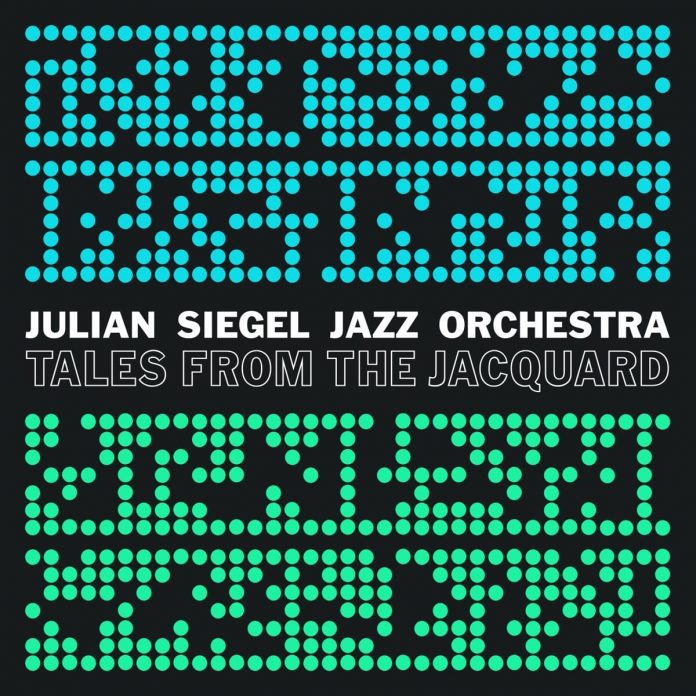 Julian Siegel has usually been seen leading small bands such as Partisans or his quartet or he’s been a sideman in the larger ensembles of others such as Mike Gibbs and Kenny Wheeler.

Tales from the Jacquard is the first outing where he’s in control of an orchestra, albeit there’s a conductor in the form of Nick Smart enabling Siegel to focus on his own instrumental contribution to the performance. Throughout the 31 minutes of the suite Siegel also affords plenty of room for individual soloists to improvise and shine.

The album’s title stems from the Jacquard punch cards invented by Joseph Jacquard in 1804 that set patterns for mechanical lace-making looms. It turns out that Siegel’s parents owned a lace-making factory in Nottingham and he’s never forgotten the rhythmic clattering of the looms when he visited as a child.

In the album’s 12-page booklet, Siegel details how he utilised the sequences of punch-card holes and spaces as a basis for the compositional process and rhythmic form of this three-part work. The piece was originally commissioned for Derby Jazz Festival in 2017, and this looks like a concert recording from the time.

Part 1 starts with a sound recording of mechanical looms which segues into pianist Liam Noble’s melodic opening theme. Oli Hayhurst and Gene Calderazzo set about a bass and drums groove to match the rhythm of the looms and Claus Stötter solos masterfully on flugel. Noble mirrors the mechanical rhythm in part 2 and Tori Freestone on flute, providing one of the best solos of the suite, is nicely followed by Siegel’s on soprano.

The whole band simulates the sound of the machines in part 3 whilst Calderazzo displays his trademark explosiveness on drums. Busy solos are delivered by Harry Brown on trombone and Stan Sulzmann on tenor then after a bass interlude from Hayhurst, Henry Lowther on trumpet and Siegel on tenor come in with muscular solos before the band bows out on a softer note.

In the rest of the album, the jazz orchestra embellishes four numbers penned originally by Siegel for his smaller setups, with the last track being an accelerated rearrangement of Cedar Walton’s Fantasy in D. All Siegel’s arrangements in the album’s second half are such that soloists from this star-studded jazz orchestra including Jason Yarde, Trevor Mires, Mark Nightingale, Percy Pursglove and Mike Chillingworth are amply highlighted once again.