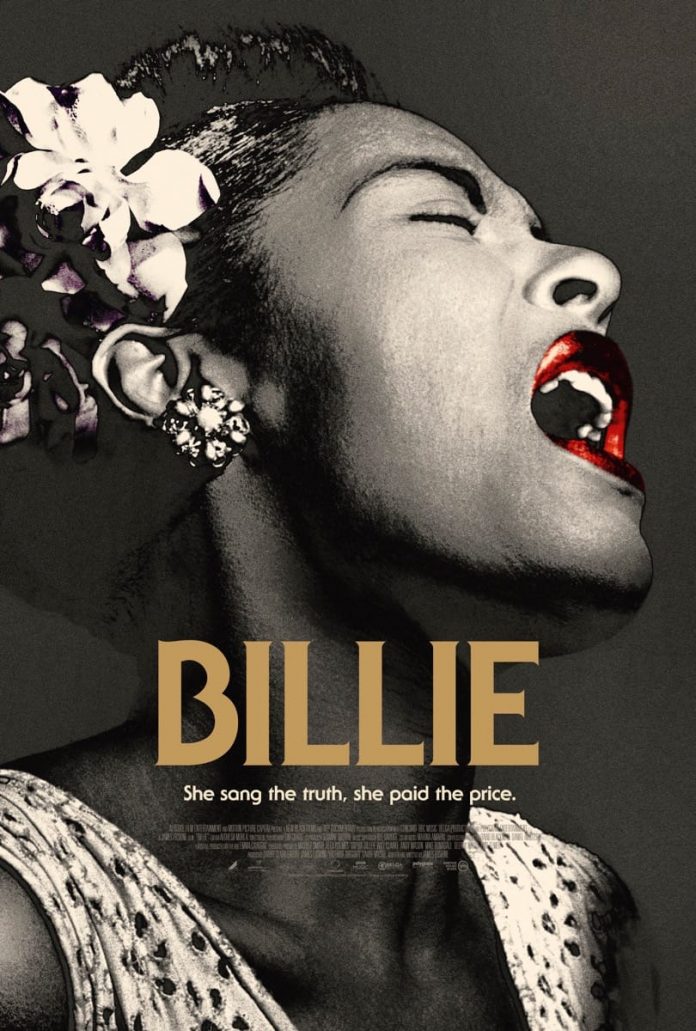 Director James Erskine’s valuable documentary intertwines Holiday’s story with that of Linda Kuehl, a literary journalist who in 1970 began a biography of her. Kuehl was a Jewish liberal and ardent proponent of civil rights, outraged at the treatment that Holiday had received during the era of segregation – issues that understandably have a central place in the documentary. There’s much previously unheard audio testimony, drawn from over two hundred hours of interviews that Kuehl taped with John Hammond, Charles Mingus, Sarah Vaughan, Tony Bennett, Count Basie, Jo Jones, Holiday’s step-parents, and many others. The gallery of characters, whose profane language matches Holiday’s own, include a police officer from one of her drug busts, and a pimp from her years of teenage prostitution. Their views aren’t always politically correct, to say the least.

These fascinating interviews are the most valuable part of the documentary. Kuehl did not want to see Holiday as a victim, which is how she was often portrayed. But among the interviews, the singer’s friends attest to her masochistic streak, or low self-esteem. Record producer John Hammond discovered her, and – unlike the self-deprecating Holiday in one pre-Kuehl interview – expresses no doubts about his place in history. He has a vicarious spat with fiery drummer Jo Jones over the latter’s allegation that he “fired” Holiday from the Basie band for not singing enough blues.

In order to draw in a younger audience, they say, the filmmakers turned many black-and-white images – photos and film – into colour. The result is not an improvement. (They leave footage of Holiday’s funeral in black-and-white.) All film clips are from the singer’s later career, presumably because there’s little or no earlier material. As a result, her 1930s performances are skated over, and new listeners could be forgiven for assuming that her career began with Strange Fruit. Most of the newspaper articles depicted refer to her as “blues singer Billie Holiday” – was anyone actually listening to her work? Holiday claimed to have taken Bessie Smith as her model, but she sang few blues, and none in Smith’s weighty style – her autobiography, and the film of the same name, Lady Sings The Blues starring Diana Ross, are misnamed. Her material was the show tunes of the 20s to the 40s, plus a small number of original compositions such as Don’t Explain and God Bless The Child. Holiday was nonetheless a master of the blues, as shown in the documentary by a performance of her own composition Fine And Mellow.

As Gunther Schuller comments in The Swing Era, “the sensational events of her private life have attracted more attention than her artistic accomplishment”. That remains true here. But though musical insight is limited, there are some quotable quotes. As her pianist Bobby Tucker puts it, when Ella Fitzgerald sings “my man has left me”, “you think the guy’s going down the street for a loaf of bread. But when Lady sings it … the bags are packed, the cat’s going down the street, and you know he ain’t never coming back”. (Donald Clarke’s biography attributes the quote to band-leader and clarinettist Tony Scott.)

That quote bears on the distinction between jazz singers who are interpreters of a lyric, and those who are spontaneous improvisers – Holiday belongs with the former. Obviously an interpreter like Holiday is in some sense an improviser, and she was spontaneous on a micro level – her genius lies in expressing the meaning of the lyrics through that micro-spontaneity. She created art from often trite material, giving the words a depth through miraculous rhythmic expansion and contraction. Holiday says in an interview that “I always wanted to sing like Louis Armstrong played. I always wanted to sing like an instrument”. And John Hammond says “I heard a singer who was (like) an improvising horn player”. But that familiar trope applies more to Fitzgerald and Vaughan. However, Holiday did sing as Armstrong, her most important influence, played – paraphrasing the melody, in a melodic rather than harmonic approach to improvisation. The description also expresses her insistence that she was a musician among musicians, not a “girl singer” fronting the band.

On a human and social level, there’s much of interest here. In her later film clips, the singer looks out of it – inebriated or high. The images from her final session, Lady In Satin, are painful – not as painful as the music, though, which I cannot listen to. As one lover comments, “She could consume more stimulants than any ten men – and still perform”, and this took an inevitable toll. From 1947, following her descent into hard drugs, there were headline-making busts. One narcotics agent reports that her manager Joe Glaser had wanted her busted, for her own good. Psychiatrist James Hamilton, who treated her after one of her arrests, says he does not like to use the word, but describes her as a “psychopath – an impulse-driven, strong, talented but not dependable individual”.

Kuehl’s biography was never finished, and from her sister’s description, maybe it never could have been. Tragically, in 1979, according to a perhaps not too thorough police investigation, Kuehl committed suicide from a hotel balcony. Family members wonder if it was murder, related to some of the shadier characters involved in the Holiday book. That’s a lot of misery for one documentary. But the consoling power of art is found in those astonishing recordings from the 1930s and 40s, cheaply made for the juke-box, and unequalled for interpretative genius in jazz or any other musical genre.

Billie will be in selected cinemas in Wales and Scotland and virtual cinema in England from 13th November and available digitally from 16th November on Amazon and iTunes.