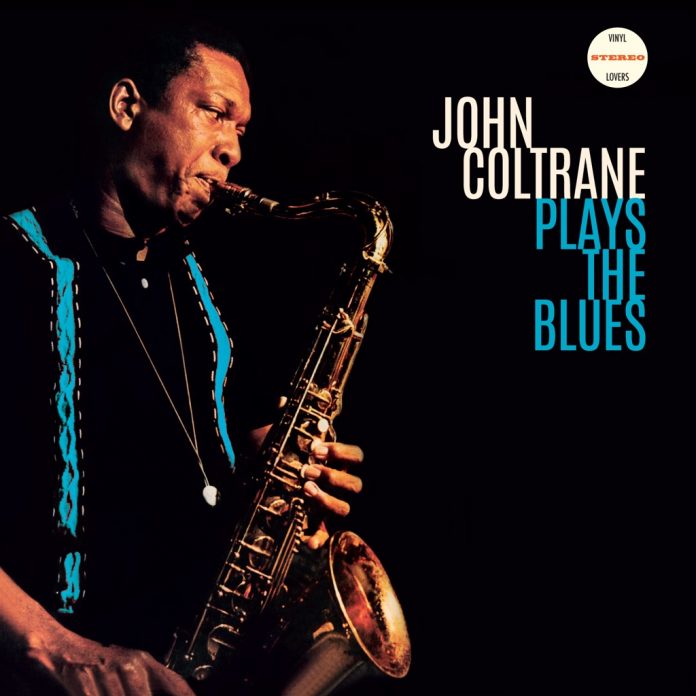 The back cover of this LP release shows a caption from the All Music Guide (printed edition) which says that the recording for this album came from Coltrane’s sessions for Atlantic in late October 1960, sessions which also produced the material for My Favourite Things and Coltrane’s Sound. Musically speaking, this album is most of a country mile away from the other two albums, with the excellent and vibrant Coltrane’s Sound sounding in some ways like a much more fully formed version of what the band were trying to do on the second half of this album.

The caption also says “As for the phrase ‘plays the blues’ in the title, that’s not so much an indicator that the tunes are conventional blues (which they aren’t). It’s more indicative of a bluesy sensibility”. Well, actually they are blues tunes, of the 12-bar type, some major, some minor, with the majority being of the major bebop type (with numerous additional chords, rather than a basic three-chord blues).

The product itself has the usual benefits of this seemingly most authentic of artefacts. The large-scale artwork and sleeve notes look great, as does the disc, but of course there are always downsides as well with an LP – occasional dust/fluff on the stylus, sometimes affecting the playing quality, and at least some surface noise, and of course the lack of mobility of the form, so it’s a two-sided thing.

Anyway, back to the musical content. The first half of the album consists of four blues of the same major bebop type, two of them without piano (which seems a shame with McCoy on board, particularly as I was listening to this album on the morning that I heard of his passing), and one is an alternate take. Although I’m generally not a fan of alternate takes, I do prefer the second version of Blues To Elvin here; it features some delicate solo lines and subtle harmonically complex chording from Tyner – aspects of his playing which often didn’t attract the credit they deserved.

The second half of the album is a very different beast, exploring 12-bar blues forms by using sus chords (chords with suspended fourths, for tension) and pedal notes in the bass (temporarily suspending the harmonic movement of the sequence, also for tension), and also minor blues.

Two of these tunes (Mr. Day and Mr. Knight) are quite similar in terms of chord sequence, both exploring the aforementioned sus chords and pedals, and in the process sounding like the inspiration for later bands led by Tyner, Wayne Shorter and Branford Marsalis. They also both finish quite unexpectedly after short bass solos. In between these two, Mr. Syms is a minor blues with a mysterious-sounding melody, rather more like the type you might expect Coltrane to exploit. The final track is an alternate take of Blues To You, which sounds quite out of character after the previous three tracks.

All in all, although this is a themed album (and perhaps that’s the problem in this case), it’s a mixed offering that doesn’t hang together particularly well, despite the great talents of the quartet.

While Arnaud Guichard’s first album under the Serendip name was recorded in London alongside several musicians from the city, the Serendip Quartet’s second album...

You know that thing when your desk gets so cluttered that if you slide something more onto the front something falls off the back...

During a relatively short career Joe Maini became one of the finest alto soloists and lead players of his generation, hugely admired by his...

The look of jazz has been more or less dictated by photographers from the beginning. Even Buddy Bolden had his picture taken with his...

Bob Wilber has gathered as reliable a bunch of stalwart jazzmen you would hope to find in order to record his special arrangements of...

"...although this is a themed album, it’s a mixed offering that doesn’t hang together particularly well, despite the great talents of the quartet"Dave JonesJohn Coltrane: Plays The Blues
Advertisement