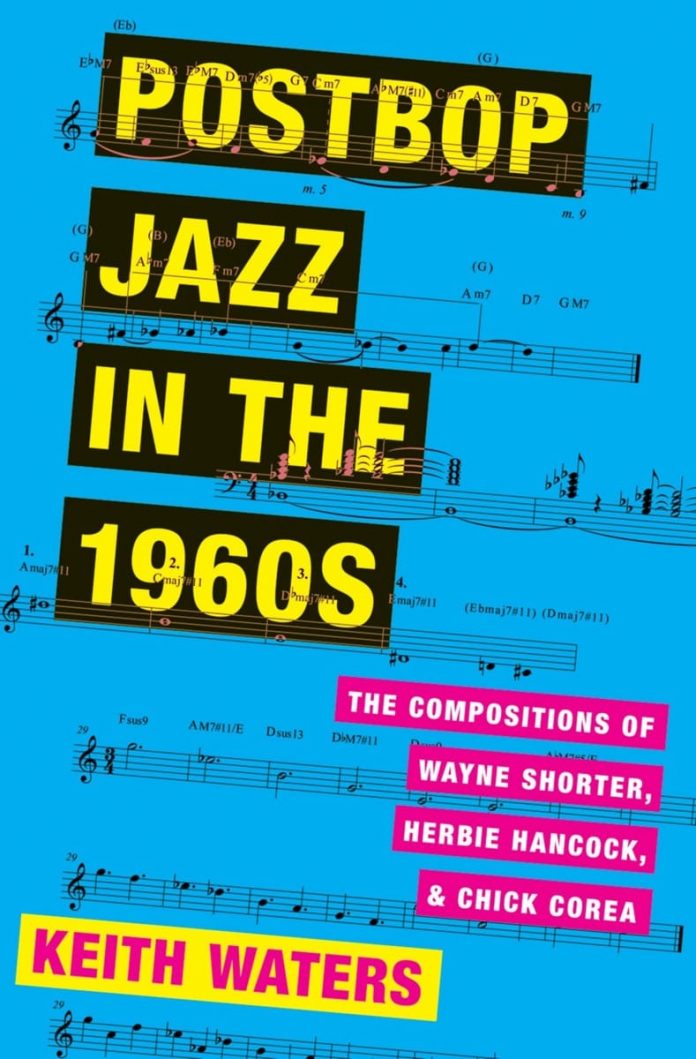 This is an academic book by Keith Waters, investigating the compositions of Shorter, Hancock, and Corea in the 1960s. There are separate chapters on each composer, in this respect, but also a chapter on the compositions of Booker Little, Joe Henderson and Woody Shaw, whose work is described as “… sharing the same aesthetic principles”. Although the book is specific in its aims, Waters frequently contextualises the study with references to influences on the musicians in question, and to earlier jazz styles. It’s refreshing to encounter a book which focuses on jazz composition, rather than the more oft-found studies of jazz in terms of performance or sociological or cultural aspects.

Given that it’s an academic book, and this is for a jazz magazine, there isn’t much space here to discuss in detail the approach used to analyse the compositions, or for that matter the author’s definition of postbop jazz which amounts to some 400 words alone. This brings us back to the time-honoured problem with studying and discussing jazz – if we can’t actually agree what jazz is, then we’re unlikely to be able to agree what postbop jazz is either. Suffice to say that investigating the compositions of Shorter, Hancock, and Corea (with a nod to Little, Henderson and Shaw) can only be regarded as a part-representation of composition within this particular jazz style. In short, we’re talking about jazz composition in the 1960s that tended to move away from the constraints of the Broadway song and its standard length chord sequences of 32 bars in, e.g., AABA or ABAC forms.

Herbie Hancock: ‘Compositionally, from a structural point of view, Watermelon Man and Maiden Voyage are probably my two strongest pieces. I’m talking strictly about craft – the balance, the relationships that are working throughout the piece. They’re almost mathematical’

Chapter 2 describes Shorter’s compositions as “…intriguing, elusive, and often harmonically ambiguous. The earlier works often rely on strong, memorable melodic motives supported by harmonic progressions that, while rooted in the hard bop tradition, nevertheless frequently move in unconventional ways that defy cliché … Like the earlier works, the works recorded after 1964 still rely on clear evident melodic motives, either using one primary motive … or two. These later works continue Shorter’s trend of writing single-section compositions, either with 16-bar or with less regular formal sections. Nearly all Shorter’s compositions written for the Miles Davis Quintet are single-section compositions: ‘Pinocchio’ is 18 bars, ‘Dolores’ is 22 bars, ‘Vonetta’ (Davis, Nefertiti) is 15 bars and includes a 5/ 4 measure”. In terms of playing Shorter’s compositions, what often sounds completely straightforward and logical on the original recordings initially seems the complete opposite on the page.

Chapter 3 talks of “…the tantalizing combination of inevitability and ambiguity that characterize Hancock’s compositions of the decade”. Hancock himself says “Compositionally, from a structural point of view, ‘Watermelon Man’ and ‘Maiden Voyage’ are probably my two strongest pieces. I’m talking strictly about craft – the balance, the relationships that are working throughout the piece. They’re almost mathematical”. Hancock also described his working methods as often proceeding first from harmony, before turning to melody: “One way I used to write, which was a suggestion from Donald Byrd when I first came on the scene in New York, was to start with some chords or a bass line. My harmonic senses are more readily available than anything I think. It’s easier for me to find a series of chords that sparks my interest than it is to find a melody that will do the same. For me it’s never just the melody – it’s the harmonic environment that it’s in. But once I get started, working from the harmony, the ball may bounce between the melody leading the chords or the chords leading the melody”.

‘Corea’s melodic language is compelling. It owes something to the pentatonic language cultivated by Coltrane’s classic quartet, but that description does little to address its richness and variety’

Chick Corea’s compositions are examined in Chapter 4. “Many (but not all) of Corea’s 1960s compositions are single-section compositions … Corea’s melodic language is compelling. It owes something to the pentatonic language cultivated by Coltrane’s classic quartet, but that description does little to address its richness and variety. There is also a special interplay between harmony and melody: a systematic or sequential move in one dimension may go unmatched in the other, for example. Further, there is a deep rhythmic dimension to the music, and Corea frequently uses melodic rhythm as a way to set up then depart from musical expectations – the compositions often avoid predictability by rhythmically varying their melodic sequences”. Corea’s turnarounds at the end of chord sequences often avoid the tonic (if indeed there is one), sometimes resting a semitone above the tonic, before the chord sequence repeats.

Even without going into more detail here, we can already see some of the similarities between the approaches of these three composers, but they also of course have their own distinctive traits. Much of the book is taken up with discussing the choice of analytical methods, why they might be suitable for the subject in hand, explaining jazz-specific terminology and suggesting further possible study. It’s certainly not for the casual reader, but it will be of interest to music academics (particularly those interested in jazz), and to some musicians and journalists that aren’t academics, provided that they get past the academic conformity and have a good look at the analyses of the actual tunes. If you’re intrigued in any way by the compositions of these jazz composers then you should perhaps take a look at this book.

Brian Payne - 19 January 2019
This is the third outing from Turboprop, the band led by 36-year-old Canadian drummer, arranger and composer, Ernesto Cervini. He studied clarinet and classical piano at performance degree level...

Frank Sinatra: In the Wee Small Hours / Songs for Swinging...