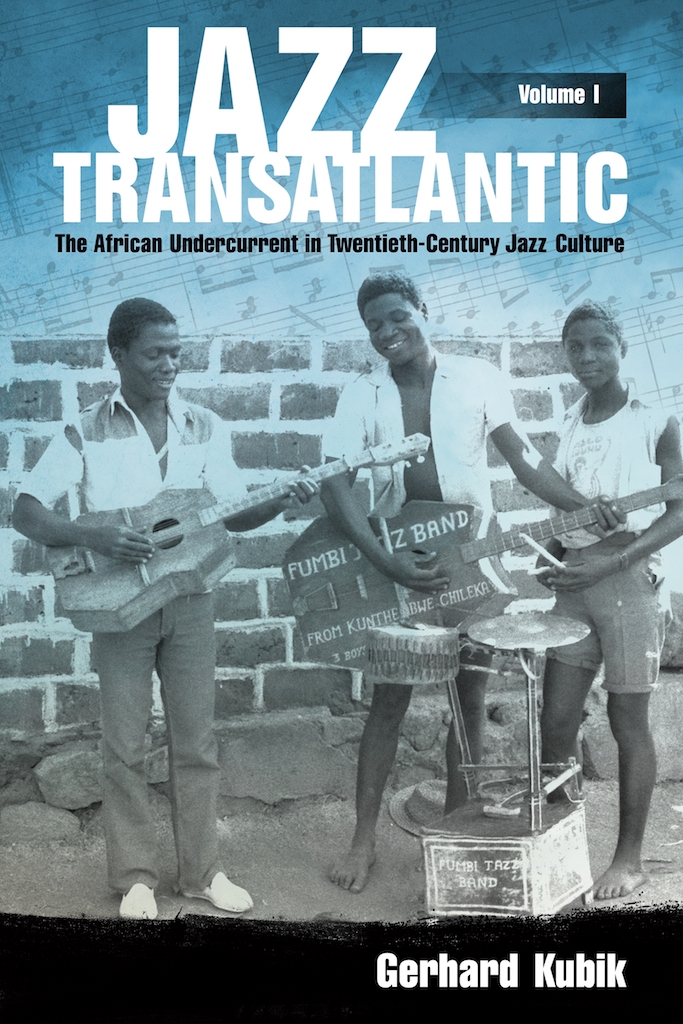 "Kubik argues that by the mid-19th century there existed several strands of African-American music ... He claims that 'jazz has been a transatlantic phenomenon from its start", and aims to undermine the ethnocentrism that still operates in jazz studies'"

Gerhard Kubik is a doyen of ethnomusicological research into jazz and African music. His masterwork comprises two simultaneously published volumes, the product of nearly 60 years’ fieldwork. Vol. 1 focuses on African influences on ragtime, blues, and jazz from the late 19th century. The second volume (review forthcoming) explores the influence jazz, and other music from the Americas had on its return trip to Africa, especially after WW2 and decolonisation.

The Austrian-born author got interested in jazz in his teens, and went on to become an eminent ethnomusicologist and cultural anthropologist. He recorded African musicians as early as 1959, respecting them as individuals, not as representatives of a static culture, and here argues that “we no longer think of individuals having a lifelong ‘cultural identity’ conferred upon them by the communities in which they grow up”.

Kubik argues that by the mid-19th century there existed several strands of African-American music, that eventually led to ragtime and jazz: minstrelsy, fife and drum groups, march music, European music high and low, and connections to African traditions. He claims that “jazz has been a transatlantic phenomenon from its start”, and aims to undermine the ethnocentrism that still operates in jazz studies.

This ethnocentrism includes what he calls “a tenacious belief that music in Africa is primarily a community expression, rigidly attached to social events and ultimately a product of an ‘ethnic’ creative spirit with few individual composers to be traced, e.g. ‘the mbira of the Shona people of Zimbabwe'”. Such assumptions “ignore the tremendous investment of individual self-training … necessary for acquiring instrumental skills, constructing vocal polyphonies, and organizing performance”; they also ignore the importance of individual noise-making devices such as snail shells or bottle-tops attached to gourd resonators.

In the 1920s, a first reaction to jazz, by musicians in the Western classical tradition, treated it as “a fascinating aberration from normal musical practice [of] playing from written scores”. Blue notes and syncopation were regarded as expressive deviations, when in fact “blue notes are not meant by blues singers to be deviations from anything; they are the hidden legacy of another, non-Western tonal system”. In Parker’s solo in Parker’s Mood, “there is no such thing as syncopation; Parker evolves his discourse over two simultaneous referential pulse-lines, one dividing the beat by three, the other by four”. I will return to this central issue later.

Individual chapters function relatively independently. Chapter 1 explores the origin of the term “jazz”. The earliest known printed reference was in 1913, on the West Coast – to baseball, and meaning “pep” and “enthusiasm”. Kubik believes it could have originated as a secret slang term in New Orleans; he also argues, plausibly, that the term could have multiple, conflicting origins. Around 1915, the music called ragtime had somewhat changed, and was renamed jazz; in the 30s, it became swing, but in 1945 “jazz” was reinstated. Chapters 2 and 3 look at the histories of Congo Square in New Orleans, and the somewhat tangential issue of voodoo.

In the chapter on “Retention, Resilience and Reinvention of African Instrumental Technique in the United States”, Kubik argues that jazz is a mainly instrumental music. He says it differs from most African music, where vocal parts are essential. It uses “instrumental resources inherited from European music … expanded by nineteenth-century musical novelties such as the saxophone”, and by 20th century developments. However, “Trumpets, clarinets, saxophones, double bass and piano became representations of lost African musical instruments”. Kubik provides material for an aesthetics of imperfection, when he reports the following story:

“Bill Johnson [from Freddie Keppard’s Original Creole Band] was one of the earliest string bass players. One time, when playing in Shreveport, his bow broke; so he had to pluck the strings the rest of the night. The effect was so novel and added so much more swing and flexibility to his playing, that he took to slapping his bass entirely”. (At the end of the 19th century, in dance-band ragtime, the bass was still bowed.)

It is common in jazz history to attribute stylistic innovations to an “accident” and the reaction to it – Louis Armstrong dropping his music and scatting is another famous example. Kubik comments that “the slap technique is … somewhat different to the [African] ground-bow technique, but it is closer to it than it is to [classical] pizzicato”. It differs from the latter in its kinetic structure – and the latter “is usually considered to be a special effect, not a dominant technique”.

The chapter on “Ragtime” explains that the name became well-known around 1896, and referred to how the metre was “torn up by the pianist’s right-hand phrasings, and thereby the melodies were in bits, like pieces of rags”. Scott Joplin, Tom Turpin and others “elevated” ragtime to a written tradition, creating “classical ragtime”. Kubik returns to one of his most important themes when he denies that ragtime involves syncopation: “A syncope in Western music … refers to a note that anticipates the beat and is then held on … it cannot be applied to rhythmic structures based on an African understanding of timing … [where there is] no concept of ‘strong’ and ‘weak’ parts of the meter”.

The chapter “Jazz Legends, Facts and Fiction” argues that “jazz was not … a new kind of music but a new expressive form of rendering a variety of musical genres”.

Anyone who wants to understand “swing” must read Kubik’s chapter on it – it’s the most taxing, technically. Again he diagnoses the mistaken application of a classical concept of syncopation, rooted in a centralised, pre-accepted meter. That is wrong, he argues, because “the ground beat in jazz is not the ultimate reference level for a jazz performer”. Rather, there is a deeper level, an infinite grid of smallest time units, that Kubik has elsewhere called “elementary pulsation”: “Those faster [unaccented] units operate as an autonomous silent reference line in performers”. Swing, he explains, is “an audio-psychological phenomenon to be studied within the psychology of perception”. Kubik identifies a “swing belt” cutting across several African language groups, from where many slaves were transported between 1750-1850. The final chapter explores harmony and tone.

This is a towering contribution to the jazz literature, and also – for such a scholarly work – mostly highly readable. I spotted very few errors. (The most bizarre was the claim that Lee Konitz and Clifford Brown played West Coast jazz.) Anyone with a thoughtful interest in the history of jazz, and the music’s African origins, needs to read it.

Before realising that this album even existed, I had already listened to most of the tracks through recommendations or playlists. When I was at...

The Daily Telegraph's Saturday Review is rightly praised for the quality of its literary pages. The reviews are generally so lively and well written that you can enjoy them regardless of the views expressed...

Pianist-singer Wendy Kirkland is consolidating her status as a force in British jazz, especially in the sector populated by "piano divas", the title of...

In view of the part that Coleman's percussionists have played in the past, this record offers an interesting variation. Blackwell, Higgins and Moffett have...