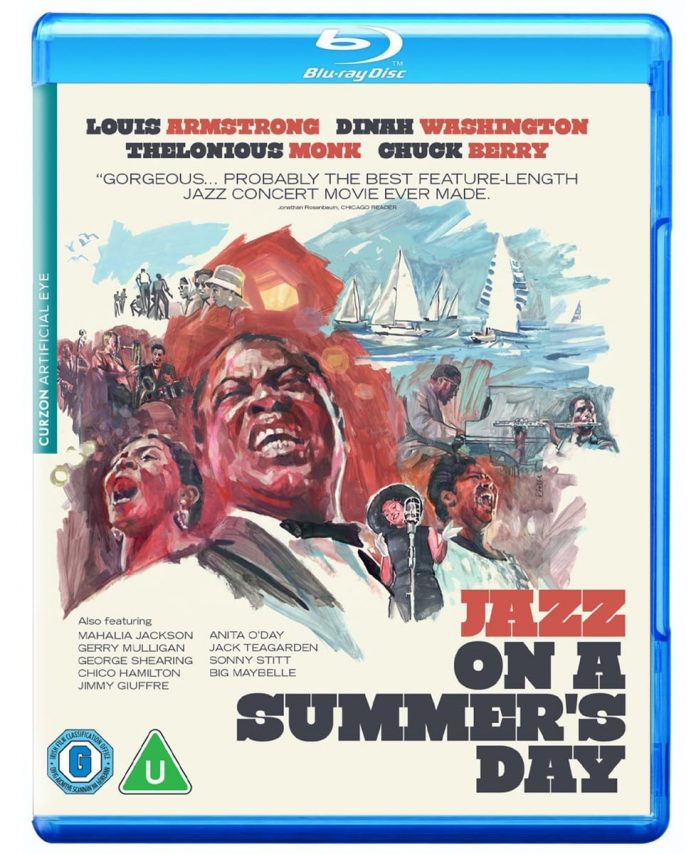 Many jazzers of a certain age – include me in – will remember seeing this pioneering documentary, directed by the distinguished photographer Bert Stern and filmed over four days at the 1958 Newport Jazz Festival, at their local cinemas in 1959.

Since then it has been released on CDs and DVDs of varying quality, with additional material, including biographical portraits of the musicians who included Louis Armstrong, Jack Teagarden, Thelonious Monk, George Shearing, Dinah Washington, Anita O’Day, Gerry Mulligan, Chico Hamilton, and Jimmy Giuffre. This Curzon Artificial Eye reissue (also currently being shown at selected UK Curzon virtual cinemas) has been given a vivid 4K remaster, and trailers can be seen on YouTube.

Although it now seems partly a curate’s egg, 63 years after its initial appearance there is still much to enjoy in what was originally planned as a romantic movie with a jazz score, set against a background of the America’s Cup yacht race. Hyped as “a picture that’s high on happiness and long on longing”, it quickly became something else. In film editor Aram Avakian’s account: “We went up to Newport with ten thousand dollars to make a short film on the festival. We ended up with a subjective documentary-feature of a public event.” Stern (who had no interest in jazz, and knew nothing about film making) had been hired by the Newport grandees Elaine and Louis Lorillard, patrons of the NJF. He turned to festival producer and jazz impresario George Wein and Columbia Records producer George Avakian as music directors.

Together they made a rather formal and hybrid Technicolor movie with as much emphasis on the yacht race, the glittering ocean, a waiter serving foaming mugs of beer and the varied reactions (from near orgasmic ecstasy to acute boredom) of the mainly white audiences at these concerts. Hand-held cameras gave a disjointed effect to many scenes.

Unfortunately, the musicians themselves, with a few exceptions, get little exposure. Jimmy Giuffre and Bob Brookmeyer (with Jim Hall) received more extended appearances, as did Anita O’Day (in a plumed hat and stylish black dress) performing memorable versions of Sweet Georgia Brown and Tea For Two, and a deep-throated Dinah Washington backed by Terry Gibbs, imploring her listeners to take All Of Me.

Other highlights of JOASD are the heart-warming appearances of Louis Armstrong and Jack Teagarden – particularly Louis’s solo on Up A Lazy River and his knock-about vocal duet with Big T on Rockin’ Chair. Unhappily, Thelonious Monk – in bamboo-framed shades – is short-changed while performing his own composition Blue Monk with cutaways to the racing yachts and an announcer broadcasting the event. Other performers, including Sonny Stitt, Gerry Mulligan, Art Farmer, Bill Crow and Dave Bailey make only the briefest of appearances. Chuck Berry and Big Maybelle (even when accompanied by Buck Clayton) hardly rank among the jazz greats, yet were allowed to deliver complete single performances.

In his highly praised autobiography Myself Among Others: A Life In Music (2003) George Wein recalls that he was “dead set” against Berry appearing in a jazz concert and that when on his hit song Sweet Little Sixteen “he went into his duck walk, I literally cringed”. An ecstatic audience obviously disagreed. Wein’s more justified complaint was that his name was notably missing from the film credits for musical direction, which listed only George Avakian: “I was so offended that for years I didn’t extend a hand of friendship to Avakian”.

As a pre-planned climax to the film, gospel singer Mahalia Jackson delivers pulse-racing “readings” of Walk All Over God’s Heaven, Didn’t It Rain and The Lord’s Prayer, appropriately on a Sunday morning – but not “jazz” singing as most of us then knew it.

Conspicuously absent from JOASD are Sonny Rollins, Miles Davis, John Coltrane Duke Ellington, Mary Lou Williams, Max Roach, the Dave Brubeck Quartet, Ray Charles and Joe Turner – all of whom appeared and were sound recorded at NJF 1958. In his excellent study Jazz In The Movies (1977), David Meeker judges Jazz On A Summer’s Day a “valuable record of the 1958 Newport Festival though made in an irrelevant and obtrusive style”. It’s hard to disagree.

Barry Witherden - 10 June 2020
These pieces are compositions by Chris Burn, except for From Ten, Two and Three, his arrangements of six guitar solos by the late Derek Bailey. Bailey was a doyen...