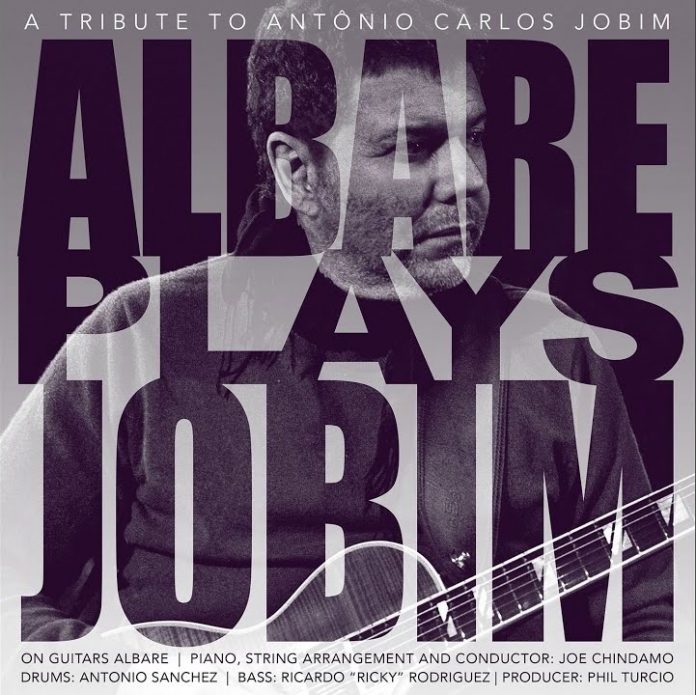 Born in Morocco, Albare (Albert Dadon) grew up in both Israel and France, some fair distance away from the bossa motherland. He now lives in Melbourne as a successful businessman and philanthropist in the midst of his musical passion. Albare says “as Jobim was such an influence in my playing, I feel this album is overdue and I am now ready to express the intense beauty of these melodies to my own satisfaction”.

Orfeu Negro, which occurs halfway through the album, receives a distinct approval from this listener. Albare captures the haunting ambience admirably giving it a fresh adaption yet still closely following the original. Perhaps a few controversial comments to raise though, although one’s opinion is never definitive: Wave seemed to drag, with the tempo being considerably under what might be expected. It reminded of a ripple across a still lake rather than the waves of Copacabana. Nonetheless, it has an inventive outro with the use of strings.

In all events, this man is to be commended. Having lost his central vision faculties, Albare has developed his style and technique completely by ear. His sound can be traced back right to the start of his musical journey, his development as a musician being completely autodidactic.

Albare’s guitar cuts through the ensemble, his sound very much in the foreground. The arrangements are beautifully constructed, with the strings giving a pleasant reminder of such Jobim albums as Wave and Jobim. You can also expect such ubiquitous songs from the great Jobim songbook as Desafinado, Água De Beber, One Note Samba and Brazil.

Albare Plays Jobim is a fitting tribute to the music of a major figure whose music has reached all corners of the world. Albert Dadon by day, Albare by night!

Bruce Lindsay - 09 May 2019
The Ebony Hillbillies take the tradition of the string band and update it for modern times, keeping the all-acoustic instrumental line-up and bringing it to their arrangements of soul,...

Jazz Journal - 26 August 2021
It is unlikely that many of the discussed in this series will find themselves the subject of a BBC television documentary film, though one can think of several men...