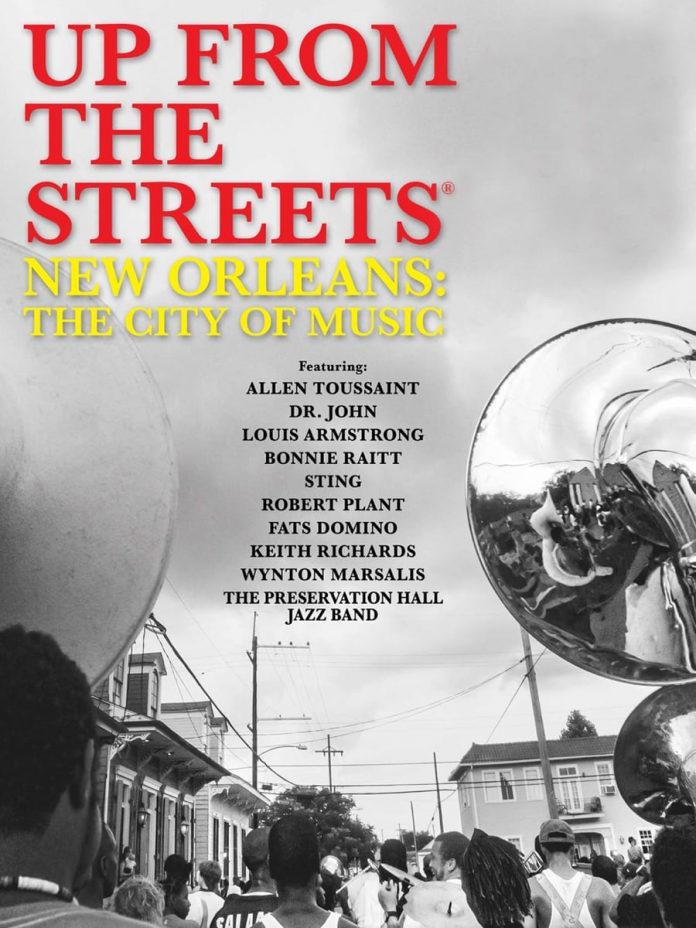 “The street has the beat; and the beat embodies the rhythm; and the rhythm embodies the culture.” Jazz drummer Herlin Riley’s insight into the connection between music and New Orleans’ entire cultural foundation is a reflective and eye-opening one. Like the rest of director and producer Michael Murphy’s creation, Up From The Streets – New Orleans: The City Of Music proves to be an astute documentary exploring this city’s musical, creative, cultural and social evolution; I feel more knowledgeable for having watched it, and have an increased admiration for the city’s journey over the past couple of centuries.

Through the poise and depth of Terence Blanchard, Oscar-nominated and six-time Grammy-winning jazz trumpeter and composer and this film’s host, we are given a dissection of New Orleans’ music, from initial innovations in jazz through to funk and R&B. Blanchard’s hosting style is informative, upfront, sensitive and enticing, leaving the viewer at ease and eager to watch on. Murphy’s balance between Blanchard’s presentation, interviews, musical excerpts and live footage is quite perfect – I found the pace of delivery through the varying vehicles easy and engaging to follow.

In terms of New Orleans’ history, it is of course widely known that this city was, as Sting puts it, “built on the tragedy of human trafficking”. However, I was unaware of this city’s practice of giving the slaves five hours of freedom each Sunday afternoon, a habit which was very different to the treatment of slaves used across the rest of the USA. During these afternoons, slaves would congregate in places like Congo Square and share musical rhythms and songs. The result was an individual New Orleans hybrid of African rhythms mixed with Creole songs as well as light opera pieces (the city is home to one of the first permanent opera companies in the USA) mixed with all the things then considered to be inferior; these all have come back as jazz, blues, rock ’n’ roll, funk, hip hop and more. This documentary maintains that this expression of freedom still echoes throughout these same streets of New Orleans.

Structurally, the film covers a huge range of aspects of the city including the Cuban influence, early women in jazz, discussion of Soul with a capital “S” and an exploration of various musicians whose lives centred around this musical hub of a city. Bill Summers expands on the Cuban influence on New Orleans through his discussion of the Congo Square drumming style and its similarity to that of Havana. He specifies that the son clave rhythm in Cuba (2:3) is merely switched in New Orleans (3:2). Additionally, emphasis is placed on the bass drum, and we are told that rhythm in this city comes from this dominating marching instrument.

The amount of content covered in just short of two hours is remarkable. It includes mention of musical legends such as Louis Armstrong, Fats Domino, Allen Toussaint, Dr. John and The Neville Brothers. Interviews with Ben Jaffe are fascinating in regards to the foundation and importance of The Preservation Hall, founded by his father and mother, Allan and Sandra Jaffe, with a focus on what the place did in terms of the mixing of races. Expanding on the topic of race and inequality, the documentary shifts towards the civil rights movements, revealing that John Lennon and Paul McCartney’s 1968 song Blackbird was a response to the civil rights struggles in the USA. Those lyrics surely hold a different meaning for me now.

As well as covering the lives and influence of great jazz musicians from the past century, the film also includes conversations with eminent contemporary New Orleans musicians such as Branford Marsalis, Wynton Marsalis, Harry Connick Jr., Mannie Fresh and Dr. Michael White. They talk of growing up in the city and delve into its lineage and language. There are also insights into venues such as The Dew Drop Inn, a place of prestige in its time, and Tipitina’s, the musical venue named after Professor Longhair’s song of the same name. As Blanchard states himself, “anyone interested in the culture and music of New Orleans will love this film. The resilience of the people of New Orleans reflects the story of America.”

Up From The Streets – New Orleans: The City of Music, produced and directed by Michael Murphy, hosted by Terence Blanchard. Eagle Rock Productions, 105 minutes.

Bruce Lindsay - 08 October 2019
Los Angeles singer and songwriter Mark Winkler has been a fan of Bobby Troup’s songs for some years and he celebrates this admiration on the excellent I’m With You. Winkler’s...