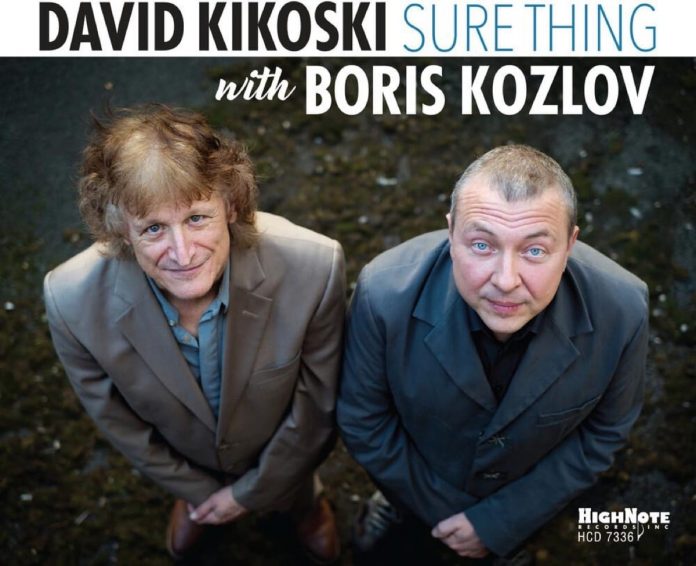 This is a refreshingly unusual piano/bass duo album, in the sense that it doesn’t particularly seem to change the pianist’s approach to playing. It often seems the case these days that pianists tone down their playing for a duo setting with bass, but Kikoski here sounds pretty much as he would with a trio or quartet – similarly dynamic, with a very full range of ways of playing. This says a great deal about Kozlov’s bass-playing, allowing the pianist to be relaxed enough to play at his best.

The album kicks off with a couple of the leader’s originals – the enjoyable scene-setter B Flat Tune, followed by E which takes off with Kikoski in trio/quartet “tearing-up” mode and Kozlov following him with style. Keith Emerson’s Fugue From “The Endless Enigma” has a more equal balance between piano and bass activity, as you might expect, and this trend continues on Kikoski’s own Strength For Change, with a great piano solo.

Next comes the not-often played Quartet #1 by Chick Corea, where the duo open out again, but this time at a higher tempo. Quartet #1 was originally recorded by Corea in quite a muscular quartet setting, so it’s some achievement to make it work so well here in a duo context.

Coltrane’s Satellite (based on the chords for How High The Moon) lifts the tempo further still, with some great playing from Kozlov, and Kikoski ends with a quote from How High. The interplay between the duo reaches a high point on Sure Thing, with its Latin flavour. The quirky, bluesy, almost Monk-like Winnie’s Garden takes us out at a rate of knots, but it all sounds so comfortable under the fingers.

All in all it’s an outstanding album of its type, offering a nicely balanced programme of numbers, all with strong melodies. None of the pieces is well-worn, and they sound very fresh in this duet’s hands. Drums and horns just aren’t missed, which is a mark of how good the playing and the treatment of material are here.

The only shame is that it took about five years to travel from recording studio to release, but it was well worth the wait. Don’t miss this one – buy now.

Brian Payne - 04 March 2021
Trumpeter and composer John Daversa is Chair of Studio Music and Jazz at the Frost School of Music, University of Miami. For a number of years he’s led various...

Pieces Of A Dream: Fired Up!