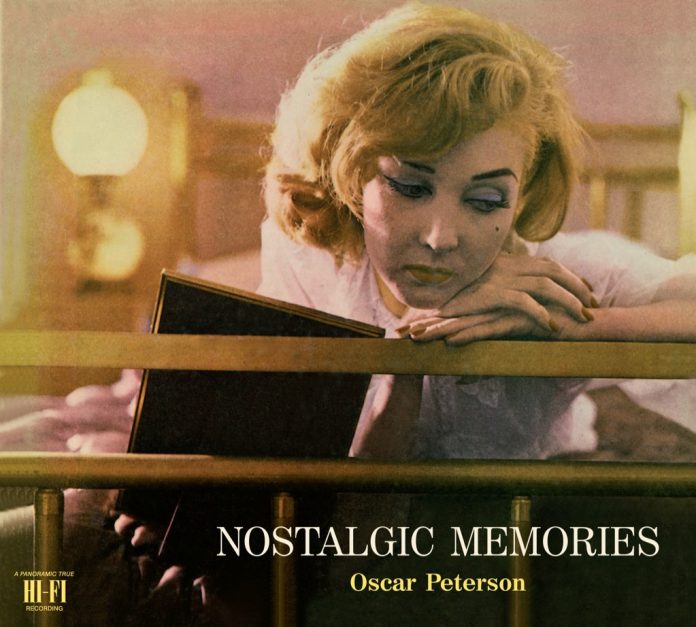 Nostalgic Memories – the LP released by Clef Records in 1956 had 12 tracks on it. It’s now released on CD by Essential Jazz Classics with 12 additional numbers from the same recording sessions.

It was customary for LPs in the 50s to consist of selections from various recording dates with similar but changing personnel. So here Peterson and bassist Ray Brown feature on all the tracks whilst the guitarists vary between Barney Kessel, Irving Ashby and Herb Ellis. There are seven Peterson duets with Brown on the CD; seven numbers from Peterson’s trio with Kessel; eight from his trio with Ashby but only two from his trio with Ellis.

The album reflects the early years of Peterson’s career from 1951 to 1954. The majority of tracks are rearrangements of standards by the likes of Rogers and Hart, Harry Warren, Jerome Kern, George Gershwin, Hoagy Carmichael and Cole Porter. On one track – Until The Real Thing Comes Along – Peterson sings and sounds just like Nat King Cole. Two original jive style numbers, Turtle Neck and Pooper, are Peterson’s own compositions.

Peterson was in his mid to late 20s when these tracks were recorded and his piano technique can be recognised as extraordinary even then. His trademark dexterity is fully on display here with surging intros, overflowing arpeggios, thunderous left-hand chordings and rapid, quicksilver runs. He can often sound like two pianists at once and as if he’s playing 50 notes when others might have used five. I should suggest that you don’t listen through all 24 tracks in one sitting as you may feel a little over “Oscared” as I was – albeit in a good way.

Discography
Gypsy In My Soul; On The Alamo; Lullaby Of The Leaves; Laura; September In The Rain; Easy To Remember; Until The Real Thing Comes Along; You Are Too Beautiful; Look For The Siver Lining; These Foolish Things; Body And Soul; I Cover The Waterfront; How High The Moon; The Nearness Of You; Turtle Neck; Pooper; Love For Sale; You Go To My Head; They Can’t Take That Away From Me; There’s A Small Hotel; You Turned The Tables On Me; I Can’t Get Started; Blue Moon; East Of The Sun (75.23)
Peterson (p); Barney Kessel, Irving Ashby or Herb Ellis (g); Ray Brown (b). New York & Los Angeles, 1951-1954.
Essential Jazz Classics 11414

Nigel Jarrett - 29 March 2019
Jorge Rossy's emergence as a multi-instrumentalist has been remarkable. That's to say, he can perform on each instrument he takes up, as though the sounds arise without laboured preparation. Known...