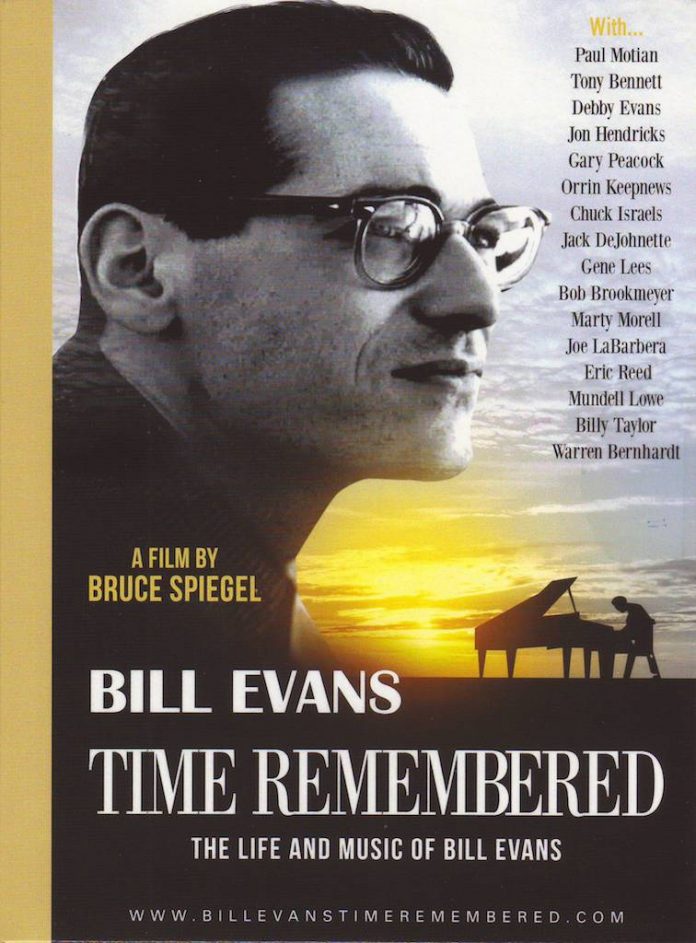 This multi award-winning documentary film by Bruce Spiegel was eight years in the making, and features over 40 interviews, including some with those who were closest to Evans, whether personally, as fellow musicians or music business professionals, or all of those things.

The press release for this DVD claims that there is no more influential jazz-orientated pianist than Evans, but this is one opinion on a complex subject, so enjoy discussing that amongst yourselves. For example, Brad Mehldau doesn’t list Evans as an influence, and he seems to claim that what some critics are hearing or seeing is actually a race-related link between two white classically influenced jazz pianists that are portrayed as looking studious whilst playing. Kenny Kirkland didn’t tend to cite Evans as an influence either, and unlike some, he wasn’t normally slow to mention influences that were important to him. Interestingly, Kirkland does cite Herbie Hancock as an influence, which couldn’t be more obvious to anyone listening. Hancock’s playing isn’t really far from that of Evans, but they tended to play in very different group contexts, with the exception of them both having stints in Miles Davis’s bands, albeit of very different durations.

Because of Evans’s turbulent life, some of the documentary falls into the all-too familiar territory of discussing the “tortured musician”, via stories of drug use etc. However, I must say that here it’s not glorified at all with claims that the drug-taking inspired or improved his music-making, but rather it highlights reactions from fellow musicians (such as Paul Motian and Scott LaFaro) who were highly critical of this side of Evans’s life and at the same time continued to be personally supportive and enjoyed playing alongside him.

Several personal pictures of Evans are painted at different stages of life – there’s the younger cheerful nice guy, the more selfish and part-troubled/part-happy middle-aged version, and then the ill and heroin-damaged older man; with occasional exceptions they all seem to have produced great music. Highly favourable comparisons are made between Evans and Chopin (both were largely piano-only composers and had a penchant for writing tunes in 3/4). This might be stretching things a little, partly because it’s a difficult comparison to make, cross-genre. But aside from this, and given the kind of film this is, superlatives aren’t thrown around at every opportunity, and it’s a pretty balanced look at the man’s life and music.

In amongst all the interviews and footage, there‘s plenty of sheet music on show, including Evans’ great but not often played tune Peri’s Scope (albeit displayed in the wrong key from an old Real Book), which helps to portray Evans as being as much composer as pianist. It’s interesting to note that there’s not much evidence of Evans seeking to write for anything other than piano trio or solo piano, which in some people’s eyes would limit his effectiveness as a composer. Also, it’s notable that most of his output is in the piano-trio format, with not too many appearances as sideman, although of course there are very high-profile exceptions, most notably his telling contribution to Miles Davis’s Kind Of Blue, including tunes that he actually appeared to write (Blue In Green, Flamenco Sketches, and possibly others) that were credited to Davis. His spell on the road with Davis was brief, but this is hardly surprising in some ways, as being on the road is tough anyway, but being the only white musician in an otherwise black jazz group in the late 1950s in the USA would have made touring noticeably more difficult – not because of fellow musicians, but because of extreme audience reaction at times, depending on the city visited.

There are three bonus features focused on Helen Keane (manager and producer), friend and bassist Connie Atkinson, and pianist Frank Collett who rates Evans’s earlier work with Scott LaFaro on bass as his best (I’m with him there), where Evans plays a little less. Some of the material in these bonus features is duplicated in the main feature, so once would have been enough, but overall this is certainly one to watch for enthusiasts of jazz, or of piano generally.