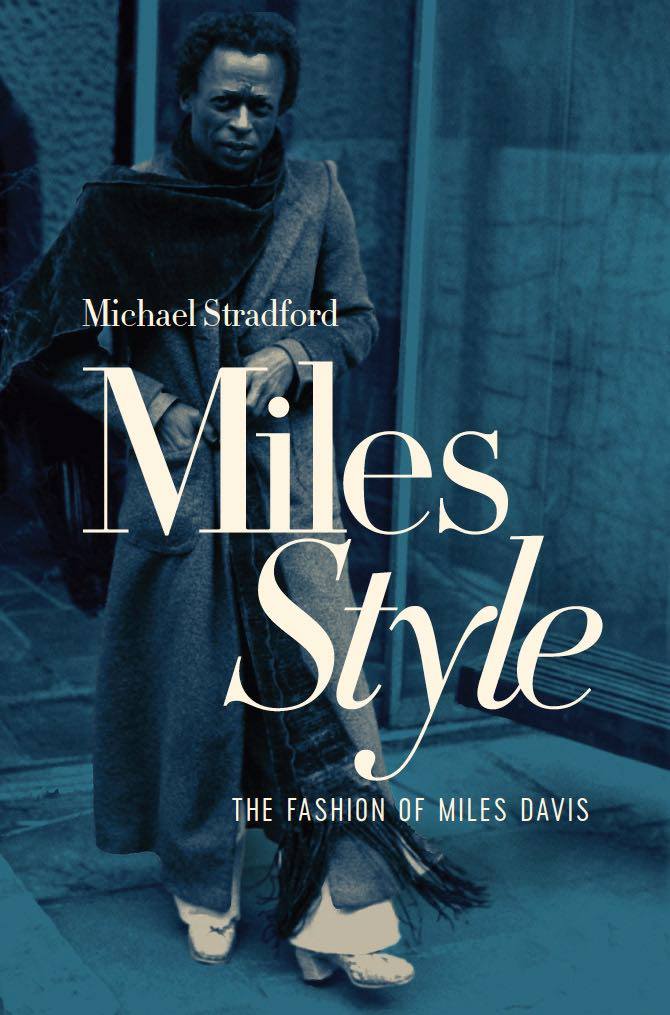 When asked whether Miles was always a sharp-dresser, even when he started out in the 1940s, his life-long friend Quincy Jones replied: “Yeah, everyone was. Not Bird, ’cause the junkies didn’t stay sharp. And Monk didn’t know how to dress”. But Miles did, and here’s the book to prove it.

GQ magazine named Miles Davis the best-dressed musician, ever, while Esquire said he was one of the top 75 best-dressed men of all time. Yet this is the first book ever to focus on Miles the style icon. But why the surprise, given that many of his album covers show him looking stylish, whether wearing Brooks Brothers suits and button-down shirts in the 1950s, adopting the flamboyance of Jimi Hendrix in the 1970s or sporting the futurism of Japanese designers in the 1980s. Miles loved clothes, and spent a fortune on them, which makes a good story to tell.

The author, Michael Stradford, has worked in the entertainment industry for some 40 years and knows the ground well. He is also honest enough to state at the off this is a not a coffee-table book, as the licensing costs for all the necessary colour photographs would have made this package uneconomic. So with a few well-chosen black and whites, he has sensibly proceeded chronologically through Miles’s long musical life, interviewing along the way a range of friends, family – both wives in Frances Taylor and Betty Mabry, as well as Miles’s last partner, Jo Gelbard – musicians, photographers, tailors, shop-owners and fashionistas to ask them about the style that was Miles.

Some of the interviewees are fascinating. Lloyd Boston, former vice-president of art direction for Tommy Hilfiger, talks about the power of style, particularly for men of colour. “As kind of marginalized people of color dating back hundreds of years, I think we were quick to understand that our image was one of the few things that we fully owned and were able to control. So when it comes time to present ourselves in public in hopes of finding equality … we know that this is the place we can control the way people see us, before we even have a chance to speak. … Our clothing and accessories showed the world how serious we were about wanting to fit in, to succeed and thrive”.

Further on, Monica Miller, associate professor of English at Barnard College in New York, talks about the style of the black dandy, for whom style was a vocation, a strategy. ”Dandyism is often an ironic gesture or pose, designed to criticize the status quo”. And Miles was that ironic critic, a dandy who knew the importance of dress and style. And Miles’s own mood was set by his clothes.

Mtume, the percussionist who played with him in the 1970s, takes these ideas further: “What a lot people didn’t understand was … he was beyond the music because he set trends, not just musically, but every time he changed the music, he changed the look and everybody started dressing like him”. Lenny Kravitz, another interviewee, remarks simply that: “When he was in the room, the mood changed”.

A concluding comment from Mtume pays this book its greatest compliment: “Anybody who thinks what you’re doing is frivolous [writing this book] is missing the point. Here’s a guy who set trends in fashion and achieved all of this while being a dark-skinned brother who was a sex symbol. Think about it, especially back then. Dark-skinned?! But he felt like he was a prince, and the whole world looked at him that way”.

Bruce Lindsay - 05 October 2020
This reissue of Monk’s first album for the Columbia label – recorded in 1962 and released the following year - comes as a 180gm LP plus an accompanying CD...