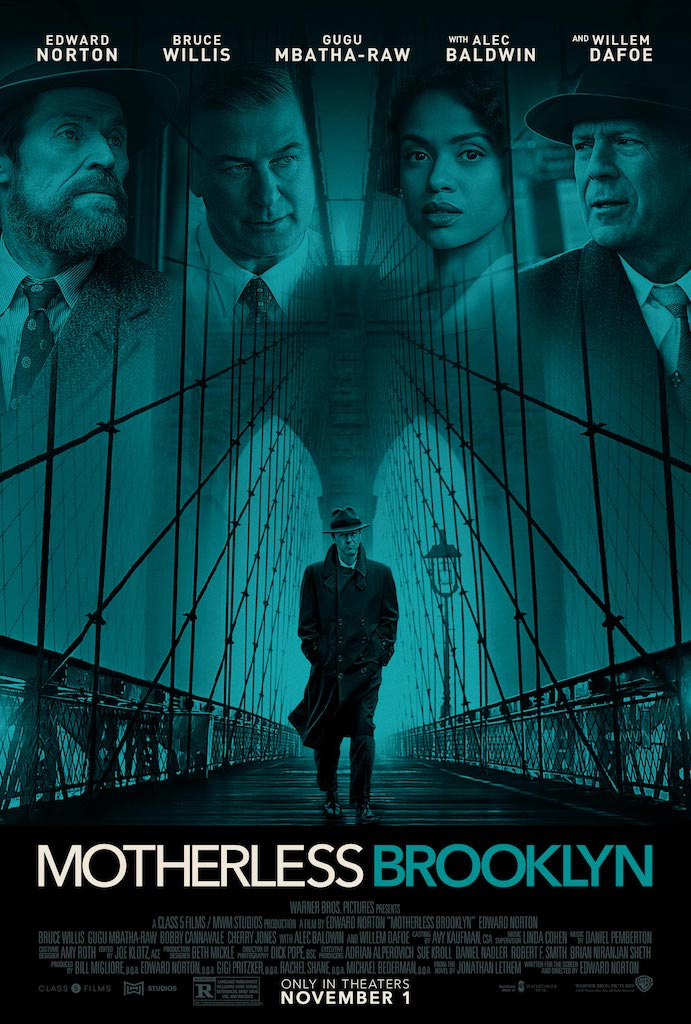 Actor Edward Norton secured the rights to Jonathan Lethern’s best-selling novel Motherless Brooklyn on publication in 1999. Exactly 20 years later he brings it to the screen in the triple roles of writer, director, and leading actor (for good measure he also co-produced).

Perhaps wisely, given the twin themes of political corruption and racism, Norton moves the time period backward 40 years from the 90s to the 50s, which readers of JJ will realise immediately means that the jazz-inflected score by Daniel Pemberton is distinctly 50s style rather than 90s.

I would in fact recommend that JJ readers who are also film buffs think about watching this fine film twice – once to bask in the top-of-the-range production values (writing, acting, photography, atmosphere) and perhaps to attempt to beat private eye Norton to an unravelling of the mystery, and a second time to wallow in the score, which is interwoven so subtly into the warp and weft of the visual scene that concentration on the music could result in loss of concentration of the plot.

To dispense with the non-jazz aspect of the plot as briefly as possible, Lionel Essrog (Norton) is a private detective working for an agency owned by Frank Minna (Bruce Willis) and staffed by men who met whilst in the same orphanage. When Frank is murdered in reel #1 Essrog determines to get to the bottom of it and brings him into citywide corruption at the very highest level, to say nothing of racism.

In the 50s the jazz scene in New York was flourishing and Daniel Pemberton’s score reflects that to a fare-thee-well and musicians such as Ted Nash, Isiah J. Thompson, Joe Farnsworth, Phillip Norris, Russell Hall, Jerry Weldon, Pemberton himself, and Wynton Marsalis do it full justice, so much so that a soundtrack album emphasising the jazz aspect has just gone on sale. To sweeten the pot there are a couple of scenes in an actual jazz club featuring an actual quartet – piano, drums, trumpet, tenor – playing actual authentic jazz.

In sum: if you’re a film buff you’ll have a ball; if your interest in film is superficial, as a jazz buff you’re in for a treat for the ears.

Bruce Crowther - 12 February 2021
Born in Norway, Nina Pedersen sang and played guitar from early childhood. After studying arranging and choral conducting in Oslo, she sang in musical theatre before moving to Rome...