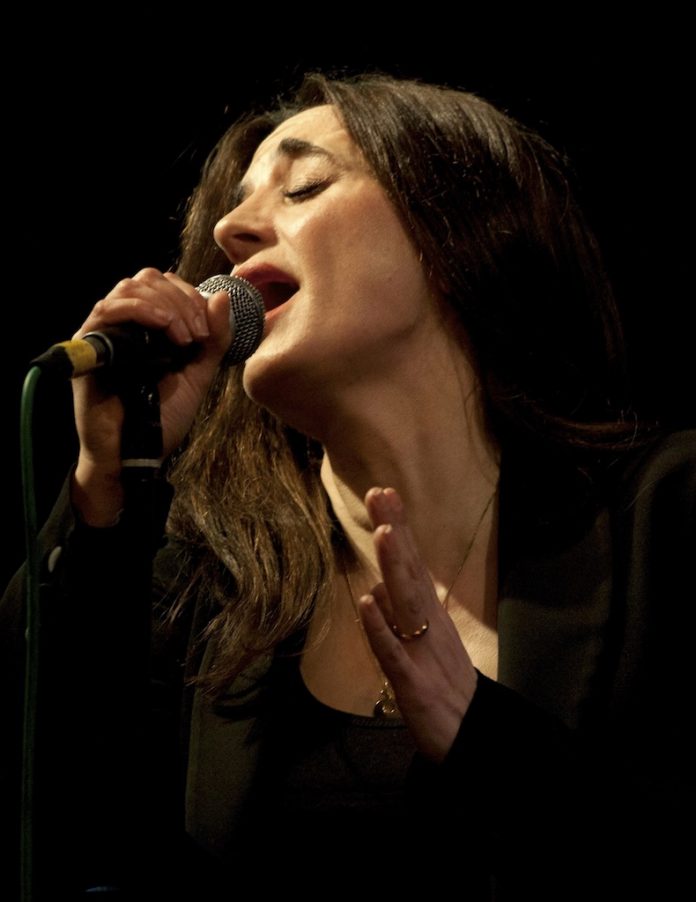 It was SRO at Pizza Express at lunchtime on Sunday when Laura Zakian came in to launch her new EP. Although she has been around for a while I only became aware of this gifted vocalist earlier this year and I had yet to see her in live performance.

One of the things that impressed me most about Zakian is the liberal sprinkling of standards that punctuate her repertoire; out of 13 tracks on her 2014 CD Songs For Modern Lovers, for example, seven are drawn from Sinatra’s 1956 Songs For Swingin’ Lovers, which Zakian’s mum was wont to sing whilst doing housework.

Recently, however, in collaboration with Martin Pyne, she has been immersing herself in the art and craft of songwriting and not unnaturally she was anxious to share this new-found skill with the auditors at Pizza Express.

She had selected a fine ensemble to share the stand with her – Steve Lodder, piano, Nic France, drums and Paul Bartholomew, baritone sax, are her regular accompanists with Bartholomew doubling as husband, but Andy Hamill on the double bass (he even threw in a harmonica solo at one point) is new, not that you’d know from the way the quartet swung seamlessly.

Given that the new EP boasts only four tracks Ms Zakian fleshed out the proceedings with the aid of Sinatra’s repertoire so that once again, as on the CD already cited, seven Sinatra titles were mixed with eight originals.

She kicked off the first set with Josef Myrow’s You Make Me Feel So Young, the first track of Swingin’ Lovers, and although it’s asking a lot to do something new with such a signature song she made a decent fist of personalising it, aided by a booting solo from Bartholomew and some sparkling key work from Lodder.

The second offering was also a Sinatra special, albeit this time from the album that followed Swingin’ Lovers. It was Close To You and gave the vocalist a chance to flaunt her ballad chops which were, I am delighted to report, out of the right bottle. For good measure and extra brownie points in my book she threw in the verse to the Gordon Jenkins/Johnny Mercer PS: I Love You.

Having fully primed us and got us relaxed she turned to the main thrust of the gig, promoting the new EP, so that the next two numbers, Plain Song and Dreaming Life, comprised half of it. Whilst “new” material isn’t really my thing I found that Zakian and Pyne contrived to be both melodic and literate and it was clear that even the older members of the audience enjoyed it.

Selection #5 brought me right back to my comfort zone. It was yet another Sinatra gem, the Burke/VanHeusen ballad It Could Happen To You, also from the Close To You album, albeit read uptempo. This was the first time all four sideman got to strut their stuff and produce a truly authentic jazz sound. Two more originals followed, with the second, Minor Moments, the title song of the EP, closing the first set.

When I spoke to Laura at intermission I suggested she may have got the idea to up the tempo of It Should Happen To You from June Christy, who did so on her Something Cool album but she didn’t know the album.

The second set was the mixture as before – four originals, four Sinatra classics and it was noticeable that not one member of the packed house failed to stay to the end. The EP may well be titled Minor Moments but what went down at Pizza Express on Sunday was much closer to major.

Derek Ansell - 03 February 2019
The four LPs collected on this two-CD set represent arguably the very best of Mingus small-group recordings. First up in 1956 was Pithecanthropus Erectus with early, strong solo work by...