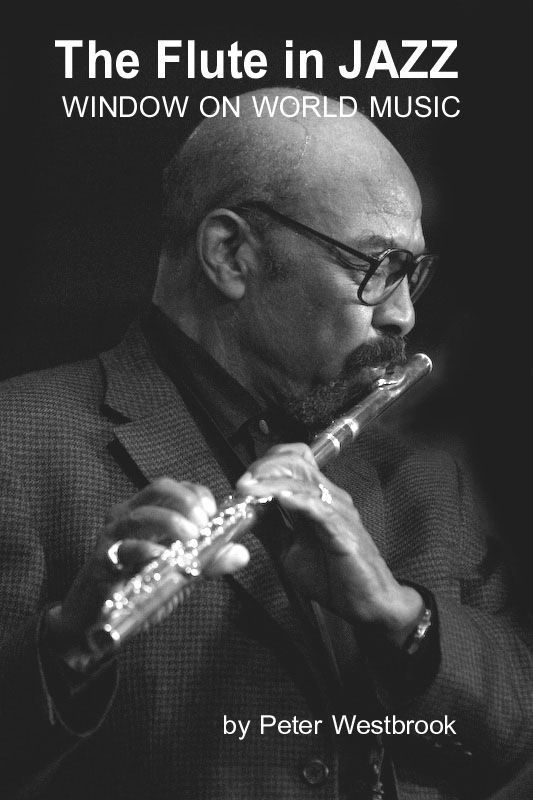 The Instrument Formerly Known As Miscellaneous. It wasn’t until 1960 that Downbeat instituted a flute category in its annual polls. At the time, it could probably have been dubbed the “Frank Wess award”, but interestingly 1960 was also the year Joe Farrell came to town, Eric Dolphy began his recording career (though not with flute yet prominent in his arsenal), Yusef Lateef made The Three Faces Of, with the wonderful flute-led Adoration and From Within (though Brother Yusef had no truck with the word “jazz” and refused to discuss it), and Roland Kirk made Introducing. There were other auguries as well. Hubert Laws had just turned 21, while others like Ali Ryerson who’ve made the flute a speciality instrument within jazz were queueing up to be born.

And there, in those last two names, lies a pair of issues that stalks Peter Westbrook’s sprawling study. Is the flute “really” a jazz instrument? Isn’t its rightful place in the classical orchestra or chamber group, with only colouristic forays into light jazz? And isn’t it rather a (PC alert) feminine instrument? More than one of the musicians Westbrook interviews admits that the flute wouldn’t have been a first choice in high school, since you were liable to be beaten up on the way home for carrying one. This hostility is reflected in Steve Voce’s characterisation of the flute sound as evoking fairies at the bottom of the garden, though Steve made exception for Wess and, interestingly, for Sahib Shihab.

Westbrook is wise enough in classical lore, and particularly Pythagorean theory, to know that the flute was traditionally associated with masculinity, and such robust male activities as war and seduction, leaving the harp to the women and to peacetime. In the same way, pink was traditionally considered to be a male colour, a recognition now limited to a certain vintage of aggressive stockbroker who wouldn’t wear a shirt in any other colour.

There’s a further problem. By far the majority of the musicians Westbrook encounters (and he is, of course, a flutist himself, and so described: “flautist” gets a [sic]) admit to having some difficulty with the flute and some ambivalence about its place as a “doubling” instrument. Will it wreck my saxophone embouchure? Will I ever be able to generate the power on it that I can on a tenor? Few went as far as Bud Shank and gave it up altogether, but even James Moody, who graces Westbrook’s cover, seems uncertain about the flute’s place even in his capacious understanding of jazz. Most recognise that – as Jimmy Hastings once advised me – having a flute gets you work. It did, and it didn’t. Or it may simply be that they’re not as easy to turn into table lamps as are clarinets.

Fact is, the flute seems to have been around since the earliest years of jazz. Wayman Carver seems to have been the first recorded exponent in the music, but early photographs suggest that flutes were on the bus whenever a territory band went out, unless, of course, they and some of the unwieldier saxes were just there for the photo shoot. Duke Ellington apparently always wanted to write flute parts, admired Frank Wess and once tried to lure Buddy Collette, a rare genuine multi-instrumentalist rather than doubler or tripler, into the orchestra. The flute has a clear and definite role in almost any iteration of jazz harmony and once an exponent learns how to overblow or to sing across the sound-hole in the Roland Kirk manner, there’s no reason to reject it as underpowered or pansy.

Alongside Carver, one probably has to mention Alberto Socarras as a pioneer, and the flute as having a separate line of development in Latin musics, with the names of Dave Valentin (often cited with admiration here), Nestor Torres, Hermeto Pascoal and others confirming the “world music” status of the instrument. Oddly, perhaps, there’s not much direct coverage of the flute’s role in Indian music and its various crossovers, odder still when Westbrook devotes a small section to the flute in rock: Ian Anderson of Jethro Tull is the most obvious and dramatic exponent, but honourable mentions, too, for Chris Wood in Traffic, Thijs van Leer in Focus, Ray Thomas in the Moody Blues and Didier Malherbe in Gong, plus many others. I’d have included Dick Heckstall-Smith with Colosseum and the beautiful, haunting intro to The Machine Demands A Sacrifice, but there’s a danger with a book of this kind of falling into the relativistic trap of “astonishing” omissions and “puzzling” inclusions.

Westbrook very securely establishes a lineage of flute playing in jazz, some of its personnel obvious, some of it overlooked, forgotten or considered marginal for one reason or another. Apart from those already mentioned, it includes Seldon Powell, Les Spann, Leo Wright, Bobby Jaspar, Harold McNair, Bobbi Humphrey, extends in the next wave to Sam Most (a genuine forgotten genius), Herbie Mann (no genius but a trier and a stayer), Fathead Newman and James Spaulding. Then come the new generation who sweep away the “miscellaneous” canard: Kirk, Farrell, Paul Horn, Charles Lloyd, Jeremy Stieg, and of course the problematic Eric Dolphy who never seems – and Evan Parker confirms this – even remotely as developed on flute as he was on alto and bass clarinet.

Since then, and led by Hubert Laws, an unchallenged virtuoso on the instrument, a new cohort of specialists and near-specialists. James Newton, who in some respects is the presiding deity of Westbrook’s account, is perhaps foremost, but one would have to include, as Westbrook does, Jamie Baum, Ali Ryerson, Holly Hoffman, Nicole Mitchell, Anne Drummond and, at the end, as if to make a point, the eternally undervalued (apart from by other flute players) Steve Kujala. To that, we could add Jane Bunnett, though she has a strong stake in Cuban music and thus perhaps belongs to a separate strand of development, but what to make of the obvious gender shift? Does this again suggest that the flute somehow suits a female or feminine aesthetic? Or is it that women are now prominent and reaching parity in jazz? Or is it that the girls are still assigned flutes rather than guitars and saxes in the school band, which is a mid-point position, circumstantial and essentialist?

Too many questions and, given the shape and structure of Westbrook’s interview- and source-based approach, not many obvious answers. Where he is unable to talk to exponents directly, he relies on those who knew or worked with them. As a flutist himself, he’s very present in the text, which could have done with radical editing. He’s also weirdly – and for a second edition, unforgivably – cavalier with names, or at least those that aren’t guild brothers; so we get “Andre Hodier”, “Wallace Rooney”, “Kurt Rosenwingle”, and “Phil Seaman”, though Phil is corrected subsequently. We also get Edgard Varèse’s Density 21.5, written for Georges Barrère and famously played by Eric Dolphy, but also Varèse’s rather less well-known “Density 25.1”, written for an instrument of another metal than platinum, presumably.

With so many errors and a quite inadequate index, The Flute In Jazz isn’t as useful or convincing a reference resource as it ought to be, but it is anecdotally fascinating and it did send me back to the shelves to dig out long-forgotten tracks and names. I hadn’t listened to Chris Hinze in years, for instance, though he gets only a passing mention in the book, and I’d neglected favourites like Lew Tabackin, Robert Dick and our own Eddie Parker and Andy Panayi. [Sic], not “Penai”: Westbrook says he is “chagrined” by all the names he has failed to cover. He should perhaps he more bothered about the ones he’s failed to transcribe in recognisable form. There’s an associated film, which I haven’t seen, and which perhaps helps the whole project cohere. Purely as a book and as a reference book, though, The Flute In Jazz is less than satisfactory.

Marian Jago - 06 February 2021
Phil Nimmons is a beloved and towering figure in the Canadian jazz scene, and a key part of the development of educational initiatives across the country. Indeed, it was...