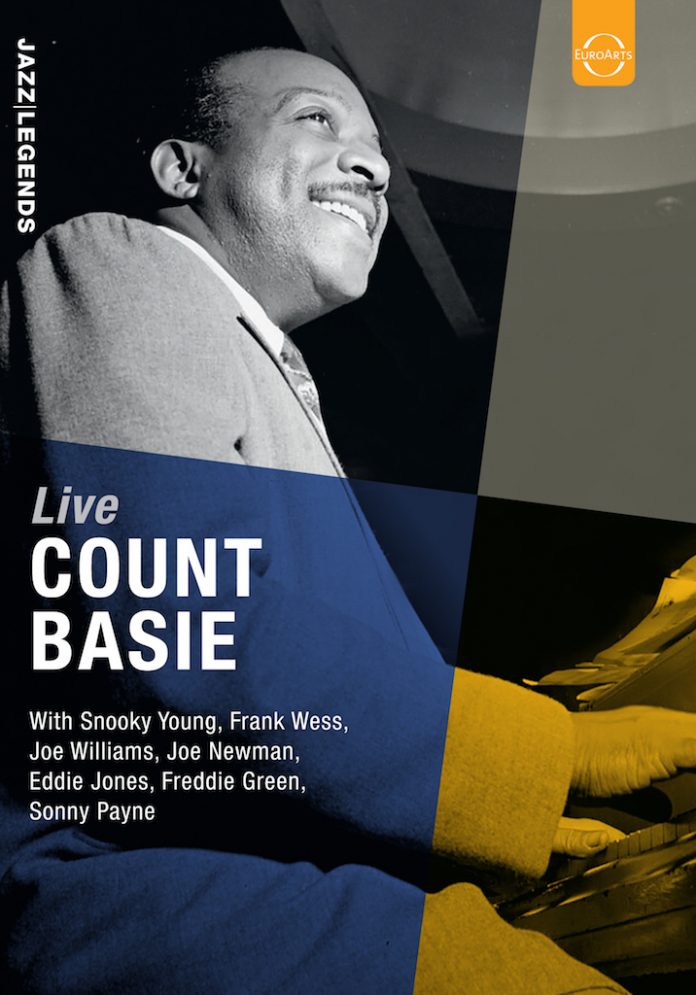 The “Atomic” Basie band made frequent tours of the UK, Europe and Scandinavia in the 1960s and this one captures it at the Palais des Beaux-Arts, Charleroi, 1961, in black and white for Belgian TV.

Joe Newman, Eddie Jones and Freddie Green are very much to the fore and acquit themselves nobly throughout. How High The Moon (as always) packs a punch, while a seemingly inexhaustible and propulsive Eddie Jones shines on the long version of The Midgets, with Frank Wess and Newman striking sparks. Section leader Royal (on alto) offers a rhapsodic interpretation of Midnight Sun, while Joe Williams is in authoritative voice on Gee Baby and Hallelujah I Love Her So. Wendell Culley on Lil’ Darlin’, reprises almost note for note his famous solo from The Atomic Basie album.

Curiously, little is seen of or heard from Basie himself, although he does conduct the band on Sonny Payne’s flashy set-piece outing, Old Man River. Unfortunately, his truncated announcements aren’t very clear. Poor Freddie Green remains largely hidden, and Charlie Fowlkes (if it is he) unlike the rest of the band, is in Larkin’s coinage, death-suited.

The personnel given (listed below) isn’t complete but I’m able to add Marshall Royal, Charlie Fowlkes and Wendell Culley. However, the identities of the tenor saxophonist who features on Whirly Bird and the three trombonists on A Pack Of Bones escape me, so any suggestions would be welcome. In any event, the disc contains a lot of good music.

Barry Witherden - 22 June 2022
Like Blue Notes For Johnny (reviewed separately) this CD was previously issued in 2008 as part of Blue Notes: The Ogun Collection, a boxed set which also included Blue...