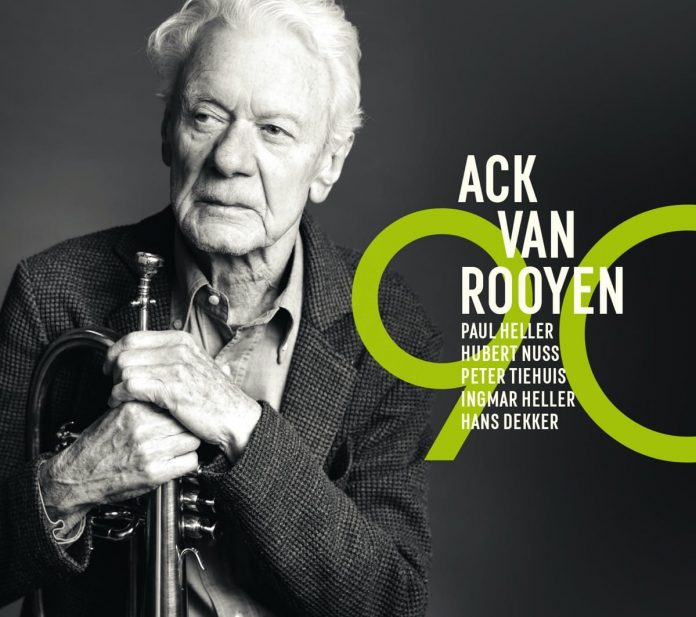 When you hear the quality of tone and line that van Rooyen displays on flugelhorn throughout this hugely enjoyable release, it’s hard – if not impossible – to believe that the music was recorded in celebration of his 90th birthday.

Van Rooyen has for many years been a distinguished stalwart of the European scene. His mellow sound and assured, unhurried phrasing have graced albums by, e.g., The United Jazz + Rock Orchestra and Peter Herbolzheimer’s Rhythm Combination & Brass. He appeared on Eberhard Weber’s breakthrough The Colours Of Chloe of 1973 and can be heard at his thoughtful and lyrical best on several tracks from Encore – Weber’s penultimate recording, released in 2015.

90 finds van Rooyen in further congenial company. Paul Heller – an excellent, full-toned and rhythmically strong tenor saxophonist and long-time van Rooyen associate – composed the diversely lively Brush It Up and The Hague Shuffle. He also supplied all the crisp arrangements and produced the album.

Ranging from Canter No.1 by Kenny Wheeler (Wheeler was once van Rooyen’s colleague in the UJA+R Orchestra) and Michel Legrand’s Papa to the reflective depths of Edu Lobo’s Pro Dizer Adeus, the rocking fun of The Hague Shuffle and the Danish traditional melody that is Sommertid, cut here in honour of NHØP, the programme is shot through with personal associations for van Rooyen – and is excellent from start to finish, eliciting fine playing all round. Check out Ingmar Heller’s lovely bass solo on Sommertid or Tiehuis’s nifty guitar lines on Shuffle.

As for the main man himself, he impresses on every track, with a “singing” tone and rhythmic intelligence that would be the envy of many much younger players. If you admire van Rooyen and/or appreciate finely crafted modern-to-contemporary mainstream jazz, you’re surely likely to love this most heartening, smile-inducing release.

Steve Voce - 02 February 2019
Harry James came close to opening my skull when I suggested to him that some of his records were “commercial”. I wish he and I could listen together to...