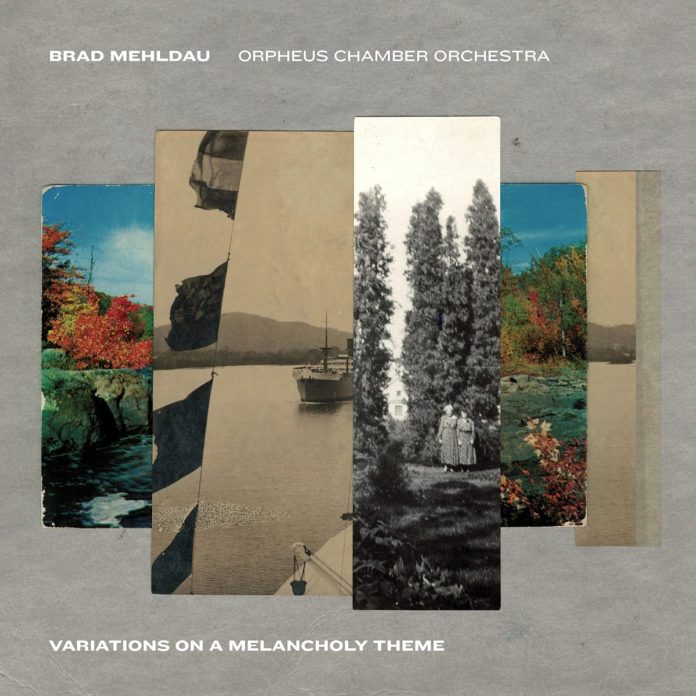 There’s a link between Charlie Parker, Stravinsky and Mehldau. Parker, inspired by the pillars of modernism living in Los Angeles, wanted to write “serious” music. Stravinsky was one of those moderns, and Mehldau has done what Parker wanted to do in stepping out of the jazz world and seriously writing for his instrument and an orchestra – not that jazz isn’t a serious business.

Mehldau’s ambitious work is a theme and variations in which the neo-classicism of Stravinsky is sometimes invoked as well as the lush and sometimes wild sonorities of a full orchestra. When composers have an orchestra to write for as a rare event it’s tempting for them to get their moneysworth. Not that Mehldau over-indulges himself; in fact, he is often sparing in treating the two-part, three-to-the-bar theme to 11 variants – more if a cadenza and postlude are included and, on the album, an encore of two more variations.

The inspirations for the theme itself, which is more homely than melancholy in a depressive sense, are not the LA moderns but J S Bach and Beethoven, whose Goldberg and Diabelli variations, respectively, were a series of two-part repeats. There’s an immediate contrast between the opulence of Variation 1 and the lighter Var 2 with violin and percussion prominent amid its florid effects. Those blocks are retained for Var 3, a more animated excursion with high registers. The Stravinsky-like touches come notably in Var 5. The “bluesy” note struck in Var 6 for piano only (and in the theme itself) is echoed more fully in Var 11, which returns to the waltz metre and calls on clarinet and English horn to reflect the piano’s character and to flower more lyrically. Var 8 has lots happening, its sombre character segueing to a martial drum signal and strong threnody, with scoring at its most dense.

The cadenza and extended coda are a brilliant summation, touching on elements of the theme but tonally ambiguous. The theme itself has a sense of finality, in terms of a journey already undertaken, so the variations reflect on something already achieved. Mehldau describes the theme as wistful, which is a more accurate description. The Orpheus is a 38-piece ensemble, against which he places the piano part as variously first among equals and unconditionally first. Parker, mutatis mutandis, would have been proud to have written such a piece.

The Orpheus commissioned the work from Mehldau, who wrote it for the pianist Kirill Gerstein. Mehldau and the orchestra have toured the work in Europe, Russia, and America. Its claim to be jazz is no greater than its use of jazz harmonies or that its composer is a jazz musician doing what many other jazz musicians aspire to.

Hugh Rainey - 23 August 2021
Sister Rosetta was a fervent gospel singer with a vibrant, charismatic stage presence. Unusually, she accompanied herself on electric guitar, with rocking fills and solos in rhythm and blues style. This...