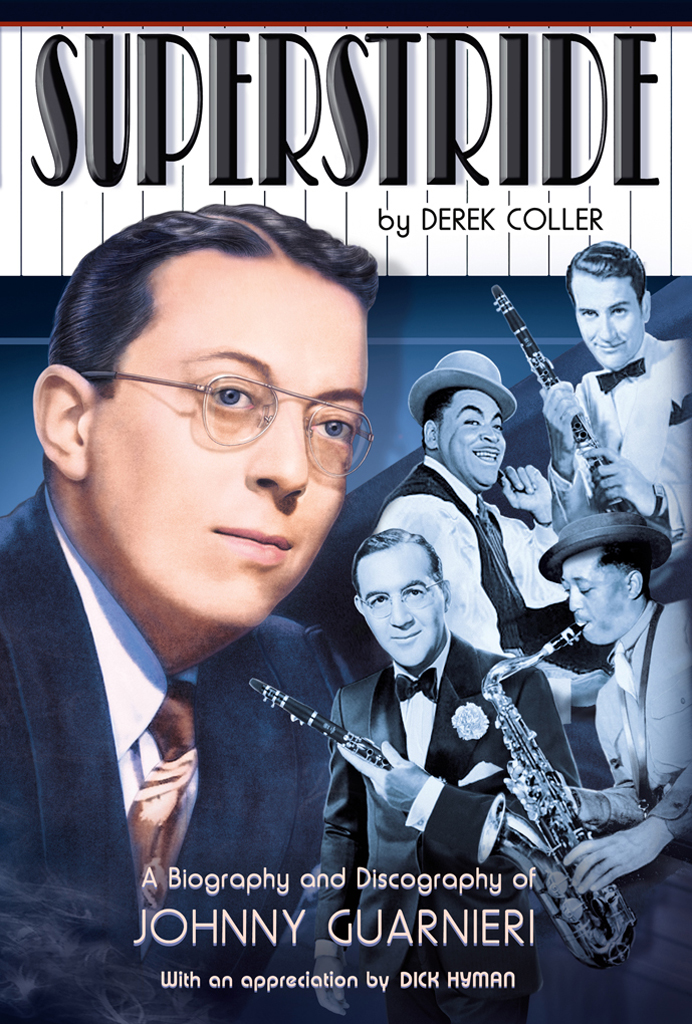 Johnny Guarnieri was telling an audience of the perils of auditioning for Benny Goodman. “Did you get the job?” someone called out. “I got the job”, answered Johnny. “I work very cheap”.

Asked if he knew Monk’s Round Midnight he said ‘Well, I do. But mine sounds more like quarter to 12’

Goodman’s appreciation of pianists, unless it was some prominent player like Count Basie or Mel Powell, was pretty negative. While Johnny was with the band, Benny used at his whim at least three others in the job. None of these unfortunates, including Johnny, was ever given decent solo attention.

”For at least two months after I’d joined the band, Benny kept calling me Fletcher until he finally got to remember my name. And then he told me I was the worst piano player he’d had since Frank Froeba.

“Benny wasn’t too happy with me because instead of a steady four, I’d comp differently, using punctuations. But I was lucky. Lionel Hampton and Charlie Christian encouraged me, told me I swung and influenced Benny. …Lionel and Charlie were the only two guys in the band who would talk to me when I joined. All the other guys were ‘big shots’, and I wasn’t”.

It’s refreshing to find in the book Guarnieri’s dry humour bursting through all the detail of his life. Asked if he knew Monk’s Round Midnight he said “Well, I do. But mine sounds more like quarter to 12”.

It was a delight to find from Coller’s volume that Guarnieri’s family is directly descended from the illustrious Guarnierius family of violin-makers. Class indeed.

There’s a deal of meticulous work gone into this book (the appealing dust jacket hides an elegant and dignified black and gold hard cover beneath). The quality of research here is to be expected from the author who gave us the magnificent Jess Stacy, The Quiet Man Of Jazz (Jazzology Press 1997), an overwhelmingly detailed account of another giant of the instrument.

In two years during his 52nd Street period Johnny recorded 130 titles at 29 sessions, and that didn’t include the many V-Disc or commercial dates that he played. The diadem was probably the March 1944 session for Keynote with Lester Young – that quartet, like the Goodman Good Enough To Keep of a few years earlier, was as near to being a perfect jazz group as makes no matter. It was also one of the best displays on record of Lester’s sublime music, with Johnny’s comping vital perfection for some of Prez’s best inventions.

Although everyone recognises Guarnieri as a giant of his instrument, he has been treated casually and deprived of the true eminence that he should have had. Perhaps this was because he was so unassuming. He was “allocated” to play with friends of mine in the Merseysippi Jazz Band at one of the Sacramento festivals, and, after dazzling the audience with solos in amazing time signatures, he slipped happily into the band as one of the sidemen.

Guarnieri went to New York to appear at a Sunday afternoon concert with Doc Cheatham on 6 January 1985. The Vineyard Theatre was sold out for the occasion. Johnny felt ill before the concert, but managed to get through to the interval before he gave up and left the concert. He went into hospital the next day and died from a heart attack on the same day. He was 67.

Coller has used the same basic formula of the Stacy book for Guarnieri. 125 pages of biography come first, inundated with masses of documents and photographs – these pictures, extremely well produced, make the pianist jump into life before our eyes. Outstanding for pianists is the appreciation of Johnny written for the book by Dick Hyman and supported by thorough analysis and solo transcription. There follows a detailed chapter on Johnny’s record output by Coller and a prolific list of Guarnieri’s compositions, published and unpublished. Another episode details his tours and appearances at festivals before the book reaches the 70 pages of discography.

An exquisitely recorded CD comes with the book, and it contains 12 of Johnny’s solos, recorded on 7 May 1973. This is phenomenal! If you play it before you open the book it will inspire you throughout your reading. Nagasaki is, I think, the greatest stride performance I’ve ever heard and the range of material, from Shadow Waltz and September In The Rain to Lulu’s Back In Town makes up one of the best piano collections you’d want to hear.

No wonder that Eubie Blake, overwhelmed with heartfelt emotion, said “Johnny Guarnieri is the greatest jazz pianist. Ever!”

Superstride, a Biography and Discography of Johnny Guarnieri. By Derek Coller with an appreciation by Dick Hyman plus a CD of Guarnieri’s work. Jazzology Press, New Orleans. 253pp. $24.95. ISBN 978-0-9638890-1-0. Available from Jazzology or Amazon.

Roger Farbey - 15 December 2020
Poetry and jazz often make for empathetic bedfellows. From Gil Scott-Heron's The Revolution Will Not Be Televised to Annie Ross's sardonic delivery of Christopher Logue's Loguerhythms, these two art...