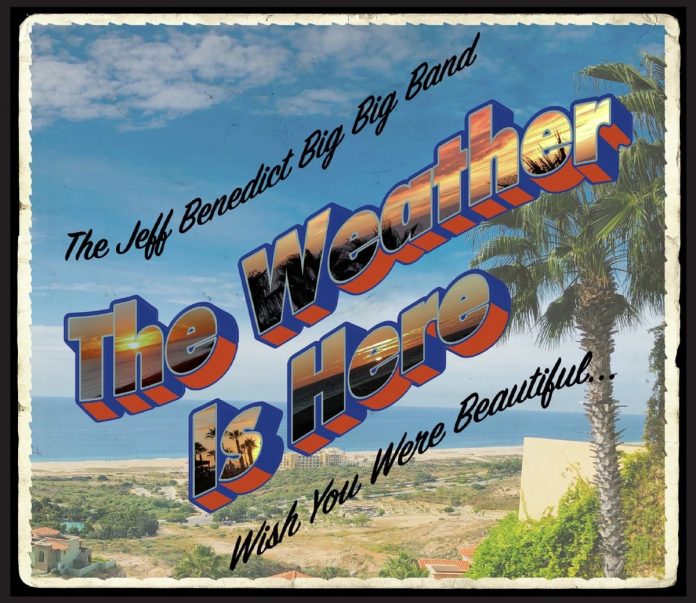 Jeff Benedict is currently a Professor Emeritus of Music at the California State University and is a 30-year veteran of the Los Angeles music scene. His impressive resumé includes appearances with Toshiko Akiyoshi, Randy Brecker, Nick Brignola, Eddie Daniels, Curtis Fuller, Jimmy Heath, Wynton Marsalis and Mel Tormé among many others.

He formed his big band in 2014 and their debut CD Holmes on the Tapestry label was critically acclaimed. This latest release with its tight ensemble playing and carefully shaded dynamics benefits from some quite outstanding solo contributions.

The groovy Moonscape opens with a repeated bass figure over delicate drum accents. It has elegant statements from Paul McKee on trombone and Jeff Ellwood on tenor blowing inventively on a 16-bar ostinato sequence with a 12-bar bridge. Miles Davis’ Nardis, first performed on a 1958 Cannonball Adderley date, is taken a little faster here but works well and has more fine McKee trombone, together with Benedict’s alto. His distinctive almost vibrato-free sound reminds me a little of Gary Foster.

The leader revisits the title track The Weather and Armadillo Research which he first recorded back in 1993 but unfortunately both have faults on my copy.

Cheek To Cheek is an absolute gem, inspired by Phil Woods’ tour de force recording from his 1977 Live At The Showboat (Jazz Collection SICP3992-3). It’s a CD I often return to and Benedict has cleverly transcribed Woods’ solo for the sax section in a bravura Supersax form with the baritone doubling the lead.

Quincy Jones’ Hicky Burr from his 1971 Smackwater Jack album inspires some raunchy blues playing from Ellwood and Dave Askren on guitar and concludes with a stimulating soli for the trombones.

Derek Ansell - 11 October 2019
Having covered at least four female vocalists in the Best Voices Time Forgot series I now find that the boys haven’t been forgotten. Rocky Cole is certainly an impressive...