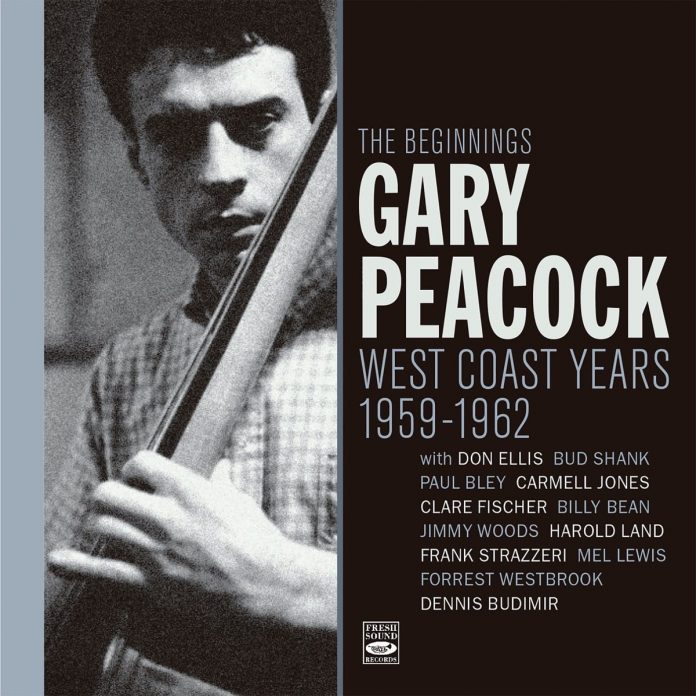 In his 1976 book John Coltrane the musician and lecturer Bill Cole offered the striking assertion that Coltrane (1926-1967) left “true records of his spirit here on earth”. The surpassing quality of this beautifully produced compilation reissue from Jordi Pujol’s Fresh Sound label – featuring early work from Gary Peacock (1935-2020) – would suggest that, for the questing bassist long renowned for his collaborations with, e.g., Paul Bley, Albert Ayler and Keith Jarrett, the creative integrity which Cole remarked in Coltrane can be discerned from the beginnings of what would prove to be a long and most distinguished career.

Taken chiefly from original sessions supervised by Dick Bock, the 12 tracks feature excellent sound throughout. I’ve relished Peacock’s work on countless ECM sessions but I’m not sure I’ve ever heard his sound captured better than it is here. Pizzicato throughout, his tone is as full and rounded as his diversely swinging and ever thoughtful lines are crisp and supple, in equal measure supportive and imaginative.

Much inspired by Scott LaFaro, right from the start Peacock had the most assured technique. And, early on, he began to distinguish himself as a composer of intriguing pieces: there are two Peacock originals here, the reflective ballad Stranger and the cooking slice of uptempo fun that is Liddledabilduya.

The programming of Pujol’s compilation is as thoughtful and stimulating in detail as it is resolved and satisfying as a whole. There are vivid finger-clicking standards (hear Peacock muse and groove on Willow, burn on I Love You) and blues-shot tropes (sample the Blakey-touched shuffle of New Groove or the mellow delights of Blues For Home) to enjoy, as well as the freshly exploratory approach evident in vibrant pieces by Clare Fischer (Free Too Long, with its remarkable interaction between Fischer’s fleet, up-and-probing piano and Peacock’s lithe, often upper-register lines), Carla Bley (Donkey, a revitalised 12-bar blues) and Don Ellis (Form, a shape-shifting, 10-minute odyssey where Peacock’s electrifying mix of strong walking figures, potent cross-plucking and rubato deliberation underpins and propels what is both the “furthest out” and most intensely cooking music here).

I’ve long enjoyed the work of Peacock on the early ECM releases Paul Bley With Gary Peacock and Ballads (featuring tracks recorded in New York between 1964 and 1968) so it was a particular pleasure to hear him here in the even earlier quicksilver company of Bley, Ellis and Nick Martinis. Recorded in July 1962, their Donkey and Form furnish equally instructive examples of the freeing up of the bassist’s role, even as the music swings like hell. As Ellis noted at the time, “Donkey […] is a standard twelve bar blues in F. However, the way Gary Peacock handles the bass line is fantastic and helps put this blues on a unique plane. It should serve as a model for any bass players who want to learn about the spirit of the ‘new thing’ in jazz”.

The key question of the changing interactions of drummer and bassist in the evolution of so-called “free jazz” in the late 1950s and early 1960s is but one of many matters addressed by Pujol in an outstanding sleeve-note. This features no fewer than 17 pages of information and insight, including mention of such a relatively unsung yet accomplished pianist as Forrest Westbrook (who takes a beautifully sprung solo on Willow). The assiduously researched text is complemented by some 40 black and white and colour photographic illustrations, as extensive biographical detail is integrated with a deft consideration of broader currents in jazz history – going back to the founding innovations of bassist Jimmy Blanton in the Ellington band of the early 1940s, for instance, and airing various issues concerning the evolution of “free jazz” in the 1960s.

The quality of musicianship from Peacock’s various companions is first class throughout. Relish sparkling work from the likes of Carmell Jones, Bud Shank, Harold Land, Jimmy Woods, Dennis Budimir, Clare Fischer and Gene Stone – not to forget Mel Lewis and the aforementioned Westbrook, Bley and Ellis. Fabulous stuff, from first note to last: an essential addition to the Peacock discography which no enthusiast of either Peacock in particular or premium brand early 1960s jazz in general will want to miss.