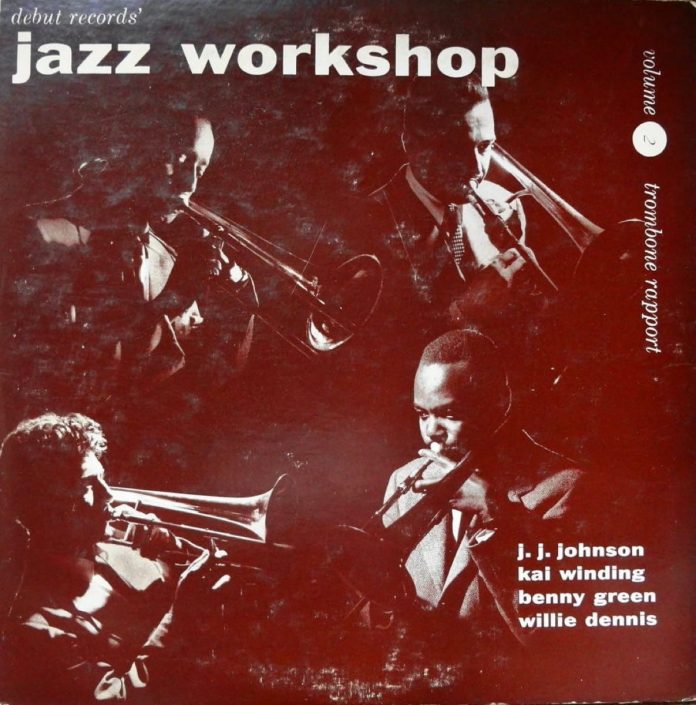 Later in 1957 Dennis did a tour with Charles Mingus in a group that included Bunky Green, Wynton Kelly and Dannie Richmond. They travelled across country playing Washington D.C., Los Angeles, San Francisco and Vancouver before returning to New York for a booking at Birdland. Willie then decided to leave Mingus to concentrate on studio work and recommended Jimmy Knepper as his replacement.

Nineteen-fifty-seven was also the year Dennis proved to be an elegant spokesman for his instrument when Metronome published his essay The History Of The Trombone in their March issue. For most of that year he was a member of Woody Herman’s Fourth Herd, sitting next to his original inspiration Bill Harris in the section. “The first time I heard Bill Harris”, Willie once said, “I knew that he was the one who was doing anything new on the trombone. I went to hear that Herman band as many times as I could and bought all their records just to listen to that Harris sound. I knew it was the sound I wanted for my own blowing.” He joined in January when the band appeared on the Jerry Lewis TV show and stayed with Herman for most of 1957. Harris, along with Jack Jenny, was Herman’s favourite trombonist, so Bill obviously took care of the trombone solos himself.

He joined Benny Goodman for a short European tour in May 1958 that included a week performing at the Brussels World Fair. Zoot Sims was in the band and after the tour he and Willie were invited by Joachim-Ernst Berendt to join Kenny Clarke for a concert in Baden Baden, Germany with some local musicians (Zoot Sims, Lost Tapes SWR Jazzhaus JAH-410). The trombonist is heard on Blue Night, These Foolish Things, I’ll Remember April and Trottin’.

Back in the USA he rejoined Woody Herman for a hugely successful three-month tour of South America and the Caribbean under the auspices of the State Department. Early in 1959 he performed on Mingus’s Blues And Roots album and is heard on an infectious Wednesday Night Prayer Meeting (Atlantic CD 1305). For the next year or so he was usually to be found working with Buddy Rich’s small group at Birdland with either Phil Woods or Seldon Powell as the other horn. He visited Brazil with Rich in 1960 which was the year he recorded a particularly fine album with the drummer titled The Driver along with Seldon Powell, Marky Markowitz, Mike Mainieri and Earl May (Wing MGE 26006). He is particularly impressive on Big Leg Mary, Straight No Chaser, Bloody Mary, Night In Tunisia and Miss Bessie’s Cookin’. For all his brilliance in powering a big band it is sometimes forgotten what a sympathetic and very subtle drummer Buddy Rich could be in a small-group situation.

Don Ferrara, who was a charter member of Gerry Mulligan’s CJB, told me how Willie came to join the band: “Gerry already had Bob Brookmeyer but he wanted another strong soloist in the trombone section so a couple of months before we left for Europe, Willie Dennis joined us and he was perfect. I had first met him when he was with Elliot Lawrence in 1948 and he was a very good friend of mine. He started studying with Lennie and his playing was just beautiful. He had very good chops and great time with a soft texture to his sound … he was very spontaneous, immediately reacting to what was happening. He was also a very good cook and if you ate at his house you ate well.”

Bob Brookmeyer: ‘He was a very unusual player because he didn’t seem to tongue at all and I don’t know how he did that but he was wonderful to work with’

Brookmeyer too was very happy to have him in the band: “Willie and I loved to work together. We tried to give him all the solo room we could on pieces that suited him, bearing in mind that I was the second banana and featured soloist. He was a very unusual player because he didn’t seem to tongue at all and I don’t know how he did that but he was wonderful to work with. Later on when Clark Terry and I had our little band at the Half-Note he would be quite happy if I sent Willie in when I had to have a night off. Of course, Willie Dennis and Don Ferrara came from the Lennie Tristano school and all his students had a very individual voice.”

His first recording with the CJB was at a 1960 concert in Santa Monica. The band then travelled to Europe for performances in Gothenburg, Milan, Basel and Paris. His solo opportunities sitting next to Brookmeyer were just as limited as they had been with Woody Herman when Bill Harris was his section mate. On their return to New York things changed a little. One of Brookmeyer’s regular solos was on Blueport but during a residency at the Village Vanguard he let Willie take the solo. “He played so individually and well … we had to give him something to play. He deserved it.” He stretches out inventively for eight choruses, perfectly at home despite the blistering tempo of some 70 bars to the minute. The following year the CJB recorded probably its most ambitious album (A Concert In Jazz) which included George Russell’s magnum opus, All About Rosie. Mulligan described composer Gary McFarland as a “Godsend”; he contributed not only Weep but Chuggin’ to the date, which was notable for Dennis’s utterly relaxed, laidback sense of swing (The Complete Verve Gerry Mulligan Concert Band Sessions, Mosaic MD4-221).

In 1961 he married singer Morgana King, who had previously been married to Tony Fruscella. Willie had performed on her 1959 album (The Greatest Songs Ever Swung) and she had visited Brazil with him when he was there with Buddy Rich. The CJB’s last studio recording in 1962 featured Willie on Bridgehampton Strut. He carried on working with the band but it was becoming increasingly difficult for Mulligan to keep it on the road. Their last engagement was at Birdland in December 1964, not long before “The Jazz Corner Of The World” finally closed down for business. By then Thad Jones had been added to the trumpets, Phil Woods had taken Gene Quill’s place on alto and clarinet and the tenor solos were in the very capable hands of Richie Kamuca who was replaced by Al Cohn for part of the booking. Ira Gitler had this to say in a Downbeat review of an earlier CJB performance that year at Birdland: “If this band cannot work when it wants to, there is something very wrong with the state of music in the United States.”

Willie Dennis died in a car accident in New York City, 8 July 1965. Eddie Bert gave me the details: “I saw him the night he was killed because we were both in Joe Harbor’s bar across the street from Birdland. There was a sailor there who was pretty juiced and kept asking if he could take Willie home. Eventually they left and the sailor was driving so fast in Central Park that he lost control and hit a tree sending Willie through the windscreen. He was killed instantly.” At the funeral there was a closed casket. Phil Woods, Gary McFarland and other of Willie’s friends established an annual scholarship in his name to the Ramblerny Music Centre near New Hope, Pennsylvania. Contributions were sent to the Willie Dennis Memorial Scholarship Fund c/o Jim & Andy’s.

Seven months after Willie Dennis was killed, Gary McFarland presented a programme of new music at Lincoln Center’s Philharmonic Hall in New York (Impulse AS 9112). It was performed by a 19-piece band that had enjoyed the luxury of four days of rehearsals prior to the concert. The repertoire included Willie, which was Gary’s tribute to his good friend and there is a hint of Chuggin’ in the coda. In Willie’s memory there was an empty chair in the trombone section.