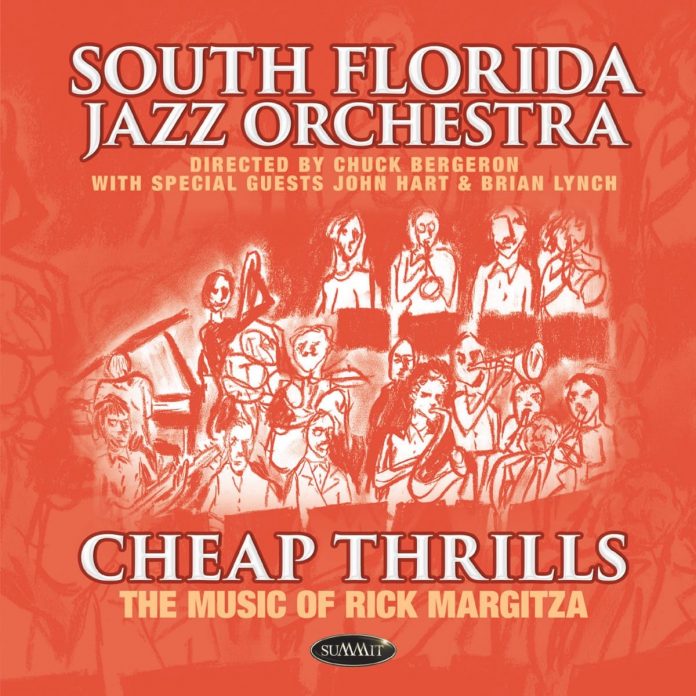 Here Chuck Bergeron celebrates the 15th anniversary of his South Florida Jazz Orchestra with the music of his life-long friend and collaborator Rick Margitza. The leader has been an in-demand bassist for four decades with people such as Woody Herman, Buddy Rich, Stan Getz, Randy Brecker, James Moody and Tom Harrell.

Tenor-man Margitza’s impressive CV includes performances with Miles Davis, Maynard Ferguson, Maria Schneider, McCoy Tyner and Chick Corea. John Coltrane, Michael Brecker and Wayne Shorter are all acknowledged influences but he has his own highly individual voice within that trinity of titans.

This is a wide-ranging programme of highly individual music. The opening title track demonstrates just how inventive Margitza and guitarist John Hart are when accompanied by an extended vamp. Hart’s melodic concept and warm sound here and throughout are reminiscent of earlier masters like Ron Eschete, Ed Bickert and Jim Hall. Widow’s Walk is a most attractive ballad worthy of a lyric from someone like the superlative Meredith d’Ambrosio. Grammy-winning trumpeter Brian Lynch makes the most of his only solo here with four creative blues choruses on 45 Pound Hound.

No prizes for guessing the provenance of Sometimes I Have Rhythm which allows Greg Gisbert and Margitza to relax on one of the oldest of jazz harmonies. Embraceable You, with its unusual 32-bar form (A-B-A-C), has inspired generations of musicians and is represented in over 1000 recordings in Tom Lord’s discography. Pianist Martin Bejerano’s gentle exploration of its rich harmonies and Rick Margitza’s exquisitely constructed, unaccompanied coda create an album highlight.

Elliot Marlow-Stevens - 01 February 2021
Multi-instrumentalist Matthew DeMerritt is a musician based in Los Angeles with a great many credits to his name. He's toured and recorded with a range of artists such as...