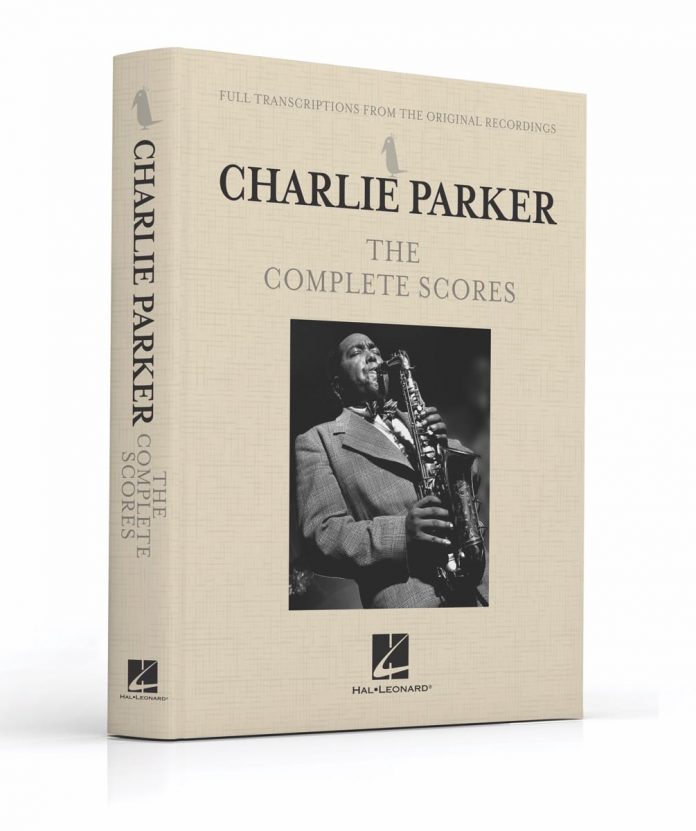 This book represents a very substantial piece of musical transcription work, which seems fitting for this Parker centennial celebration year. The price is fitting too – yes, it’s a pretty hefty $60, but that shouldn’t be any surprise given the amount of time, effort, and musical skill that’s required for such a task. So, congratulations to Chris Romero for providing the musical transcriptions – he should now be lying down in a darkened room in recovery.

There’s no discussion or theorising, in fact very little information at all, other than the not-so-small matter of many pages of largely note-for-note musical transcriptions for full band (the only exception being that the piano comping chords are notated as chord symbols rather than full notation, but not for the piano introductions and solos). In this case, the classic Parker quintet instrumentation of alto sax, trumpet, piano, bass and drums is represented, with the exception of e.g. Moose The Mooche, which, with the addition of tenor sax, was written for a six-piece. As you might expect, the horns are written in their own keys so as to produce playing in the same aurally perceived key as the transcribed concert pitch of the piano and bass. The drums are notated too, including solos.

The very short piece of text near the front of the book tells us that the transcriptions (by Chris Romero) are of 40 classic performances (“from the original recordings”), but it doesn’t tell us precisely which recordings it regards as being the originals. However, musicians and perhaps the keenest of other readers will find a way of working this out. That said, it would perhaps have been a nice touch to add the names of the musicians to the instrumental parts on each manuscript, which isn’t unusual in jazz transcriptions. For musicians, the clues to identifying those musicians and recordings will most likely be in the notation of the improvised solos: e.g., the kind of chord voicings and right-hand piano lines employed (which are perhaps surprisingly varied for bebop), or the notated horn and drum solos.

The transcribed tunes comprise a healthy mixture of Parker original recordings – some very familiar, some less so, such as Anthropology, Au Privave, Barbados, Billie’s Bounce, Bloomdido, Bird Feathers, Donna Lee, Klacktoveededstene, My Little Suede Shoes, Ornithology and Yardbird Suite, amongst many others.

One of the nice things about this collection is that it provides transcriptions of the introductions (typically four-bars long, but sometimes longer) and codas, as used in the original recording sources, which I’ve already seen to be useful for a band putting together a Parker set. These sections are not always played in head arrangements on gigs, where often a more basic tune-solos-tune arrangement is offered. However, when these introductions and codas are used in contemporary performances, they render the resulting arrangements as being a little more like the hard-bop arrangements of Horace Silver, in basic structure at least.

Valentina Addis - 11 July 2021
It is arguably a risk to combine country and jazz on one album, but Cryin’ In My Whiskey effortlessly amalgamates both genres in a setlist of familiar country favourites....

Jazz Journal - 29 June 2020
After reading this book anyone might be excused for dismissing Gillespie as a foul-mouthed megalomaniac much given to personal violence against adversaries. Band leaders have suffered in Gillespie's hands;...