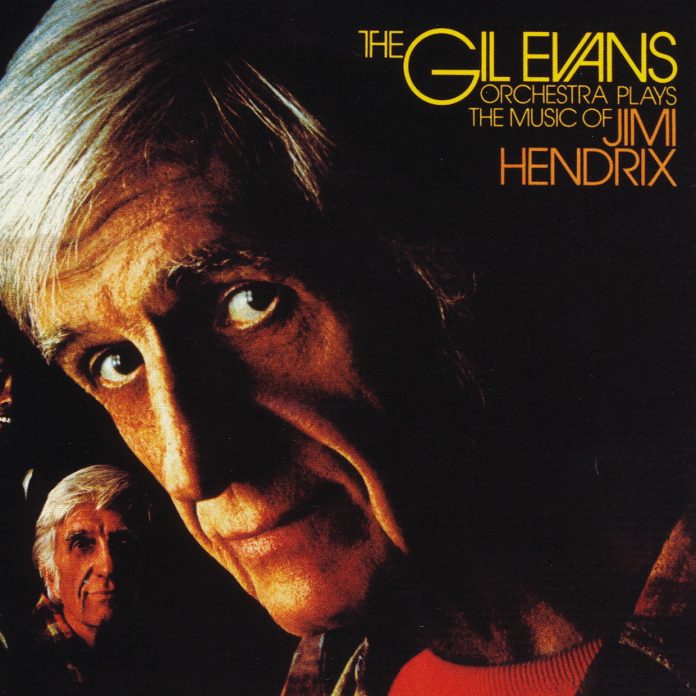 Discographically, Little Wing first appeared on There Comes A Time (APL1-1057); the second, almost complete, take of Up From The Skies is previously unreleased, while the first take is the complete original master, a somewhat edited version having appeared on The Gil Evans Orchestra Plays The Music Of Jimi Hendrix (CPL1-0667), original home for the remaining tracks. Also recorded at that time were two separate takes each of Castle Made Of Sand and Foxey Lady, as yet unreleased, as are the various different takes of all the other tracks.

All that out of the way, into the music, which I have always found curiously unsatisfactory. Evans had a love affair with Hendrix’s music that kept him and his band in good themes to the very end, but placed end to end, those themes become almost flippant under Evans’ control.

There is an inescapable air of the Boston Pops about all this, a jokey skittering across what were, in their first incarnation, raw-edged blues tunes. Howard John’s tuba intro to Voodoo Chile in particular sounds ludicrous, while Peterson’s hip vocals to Crosstown Traffic and Little Wing are embarrassing when heard today.

A spirited Gypsy Eyes makes up for that, as do Sanborn’s solo to Little Wing and the two takes of Up From The Skies, but overall, the sound is too solid, without that use of space and suspension of note that always characterized the best of Evans.

Yes, there are plenty of magic moments here, and yes, it is good to have all this material back in circulation again and in a reasonably complete form, but it is hard to escape the conclusion that this project is irredeemably timewarped.
Simon Adams

Leon Nock - 25 August 2021
This double CD is as good a definition as any of the expression "then was then and now is now". Back in the day – which wasn’t yesterday or...