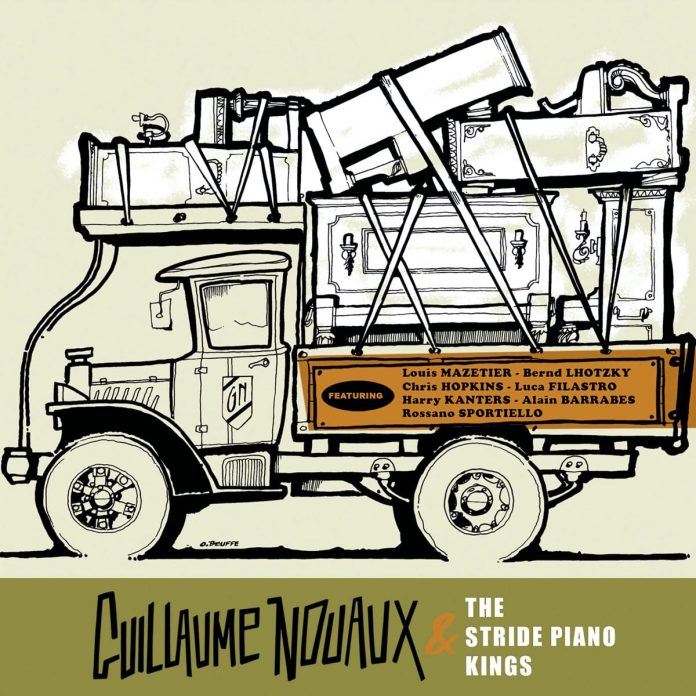 Following on from Guillaume’s recent album, which featured in trio format no less than 11 international clarinettists, this new release presents seven specialists in classic Harlem stride piano, some of whom had played in the clarinets album.

Each pianist is allocated two tracks as piano/drums duets. Bernd Lhotzky kicks off purposefully with a sizzling version of James P. Johnson’s Harlem Strut, building exuberantly. The high standard is maintained throughout the following tracks by all the accomplished guest pianists.

Alongside some familiar upbeat standards, performed with appropriate rocking bounce and drive, contrast is to hand in the form of varied tempos and less conventional stride material in some tracks. These include Louis Mazetier’s version of Drop Me Off In Harlem, Rossano Sportiello’s ballad composition Why Did You Tell Me “I Love You?”, and Willow Weep For Me from Chris Hopkins (a colleague of Lhotzky in the Echoes Of Swing group, albeit as altoist in that context). Likewise somewhat off the beaten track, and returning to upbeat mode, Alain Barrabes draws unexpectedly on Ray Noble and Dizzy Gillespie with Cherokee/Salt Peanuts.

Guillaume’s very supportive drumming, influenced by the likes of Zutty Singleton, Gene Krupa and Sid Catlett, is featured throughout in breaks and short passages. He ambitiously tackles Mop Mop entirely solo, phrasing the simple riff-motif melody percussively on well-tuned drums. (Armstrong’s 1944 recording had featured drummer Big Sid Catlett.) Lhotzky returns for the final track, and his strikingly creative arrangement of Over The Rainbow rounds off a well-planned album of exceptionally fine and colourful piano jazz. For lovers of stride, this release is a must. As Fats used to say, “Well, all right!”