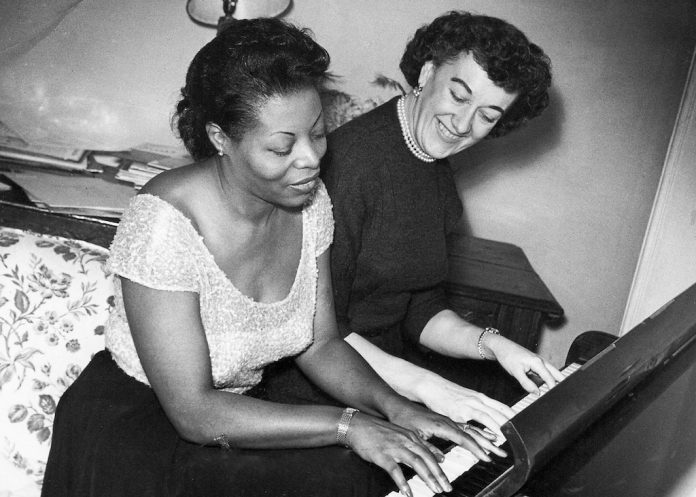 A highly talented pianist and composer, Mary Lou Williams was also one of the very best arrangers of her generation. Yet when arrangers are written about or thought of, her name seldom features. Perhaps this is because it is only in recent years that women have been accorded fair and rightful treatment. Certainly, her talent deserves attention and admiration.

She was born Mary Elfrieda Scruggs, in Atlanta, Georgia, 8 May 1910 and from early childhood proved to be a strikingly gifted pianist. She became a professional musician while still a young teenager and in her mid-teens married saxophonist and bandleader John Williams. She toured with his band, mainly in the Midwest, and after the band folded, they both joined Terrence Holder.

Upon Holder’s departure this band became known as Andy Kirk and his Clouds Of Joy, which became popular with fans and respected by fellow musicians. While this was due in part to the skilful playing of the sidemen, far more important to the band’s success were Mary Lou’s arrangements. A notable quality of her writing was the manner in which she accommodated the abilities of the band’s sidemen. So skilled was she that other bandleaders took notice and soon, in addition to her playing and arranging duties with Kirk, she was writing charts for front-rank leaders including Count Basie, Tommy Dorsey, Duke Ellington, Benny Goodman and Earl Hines.

Of all her talents, it is for her arrangements that Mary Lou Williams will be best remembered, and in particular those she wrote for the Clouds Of Joy, among them some of her own compositions, which include Walkin’ And Swingin’, Twinklin’, Cloudy and Little Joe From Chicago. The Clouds also recorded The Lady Who Swings The Band, a song written for her by Saul Chaplin and Sammy Cahn. For Benny Goodman she wrote Camel Hop and he had a hit with her Roll ’Em, while Jimmie Lunceford had a hit with What’s Your Story Morning Glory, the title of which was to become synonymous with her.

When her marriage to Williams ended she was briefly married to trumpeter Harold “Shorty” Baker, with whom she co-led a band for a while. From the early 1940s into the mid-1950s she continued to perform and arrange, working comfortably with bop musicians, including Art Blakey, who played in one of her bands, and Dizzy Gillespie, for whose big band she wrote In The Land Of Oo-Bla-Dee. She also composed a number of longer works, including The Zodiac Suite, which was performed by the New York Philharmonic Orchestra.

In the late 1950s, Mary Lou took time away from music performance. Converting to Catholicism, she immersed herself in her faith and began composing sacred music, including Black Christ Of The Andes, Anima Christi, Praise The Lord and perhaps the best known Music For Peace, which is usually entitled Mary Lou’s Mass.

The US State Department ignored her at a time when it was actively spreading American culture through overseas ambassadorial tours by jazz musicians. Their pretext appears to have been that she was a religious fanatic

Subsequently, she performed nationally and internationally, vividly demonstrating the wide range of her musical interests – from the early forms of jazz through swing and bop and into the modern era. Off stage, she could be outspoken and demanding, carrying with her through later life memories of the offhand and sometimes dishonest treatment she received in the music business, bitter recollections of racial discrimination, as well as the action of the US State Department, which ignored her at a time when it was actively spreading American culture through overseas ambassadorial tours by jazz musicians. Their pretext appears to have been that she was a religious fanatic whose beliefs suggested that she was unbalanced. If true, that surely echoes in today’s fractured society.

Active as a teacher, both informally and formally, Mary Lou’s importance to the fabric of jazz was recognised toward the end of her life when she was honoured by several universities. There was also her headline appearance at the inaugural Kansas City Women’s Jazz Festival in March 1978, Mary Lou’s Mass being performed on that occasion. She continued to perform nationally and internationally as a soloist and also occasionally led small bands. These performances were in clubs, concert halls and festivals, the latter including Middlesbrough in July 1978 (the only occasion I was able to hear her live).

Since her death at home in Durham, North Carolina, 28 May 1981, she has been remembered by events such as the Mary Lou Williams Jazz Festival, founded by Billy Taylor and staged annually at the Kennedy Center in Washington DC. There are also two biographies: Morning Glory by Linda Dahl, published in 1999, and Soul On Soul by Tammy Lynn Kernodle, published in 2005. There is also much of interest about her in Carolyn Glenn Brewer’s Changing The Tune, which I reviewed in Jazz Journal (July 2017). A documentary film by Carol Bash, Mary Lou Williams: The Lady Who Swings The Band, appeared in 2015.