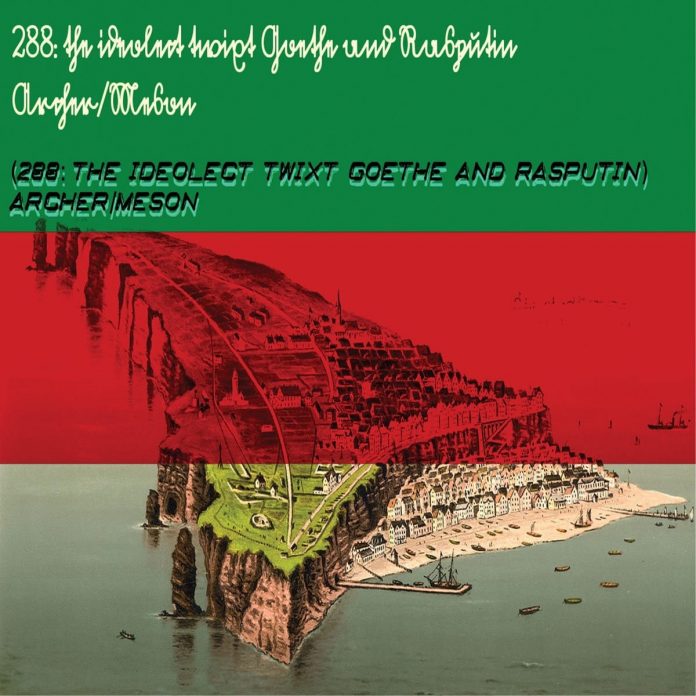 The title will already have frightened off all those who habitually bleat “Can’t they just play Sweet Sue, It’s You?”, but it’s not meant to be taken altogether seriously. It probably helps to have some idea of what’s being played around with on titles like Cat On A Hot Tin Drum or Deutschland’s Greatest Love Machine, or even (come back John Walters!) Einstein A No No.

I’ve said enough about Martin Archer in recent months (still no cheque in the post) for it to be clear where he and Discus stand in my appreciation of no-boundaries creative music in Britain. The only problem is that there is so much of it and in so many different contexts and forms. The sextet writing here seems to explore the constant tension in improvised (and most other) music between order and freedom. Evoking Goethe (colour?), Fr Grigori (hypnotism?) and Einstein (relativity?) might offer some impression of what the music tries to do, but it will only be partial.

Meson’s vocals are compelling, even if not always clearly intelligible or decodable. Archer limits himself to Bb and bass clarinet on this occasion, though both the composers use software instruments to help shape a sound that is completely sui generis. Strings and chorused voices give it a chamberish effect. I was reminded vaguely of Zyklus here and there, but can’t explain why. The best thing to do is to hear it. The second piece, also in loose suite form, is A Horizontal Babel, apparently inspired by a friend’s work in archaeology, but also Genesis XI, which as all you pilgrims will already know is the bit where divisive language begins to evolve and Babel is constructed. It seems like an appropriate metaphor for music as various as this, though it’s always clear that there is an Ur-speak behind it all, a common pool of understanding that holds the whole thing together.

Great stuff and endlessly entertaining. Oh, by the way, the 288 refers to the number of words, 45 lines of dialogue, spoken by Matt Damon in Jason Bourne. Just in case you were wondering.

Urbie Green, the “trombonist’s trombonist”, was born in Mobile, Alabama, 8 August 1926. He studied piano and began on trombone at the age of...

—1250— AH, SOUL!'Young black people today grow up with no knowledge of black jazz, of the great Fletcher Henderson band, the poetry of Fats...

Meson, Archer: 288 – The Idiolect Twixt Goethe And Rasputin / A Horizontal BabelThe title will already have frightened off all those who habitually bleat “Can’t they just play Sweet Sue, It’s You?”, but it’s not meant to be taken altogether seriously ... Great stuff and endlessly entertaining
Advertisement