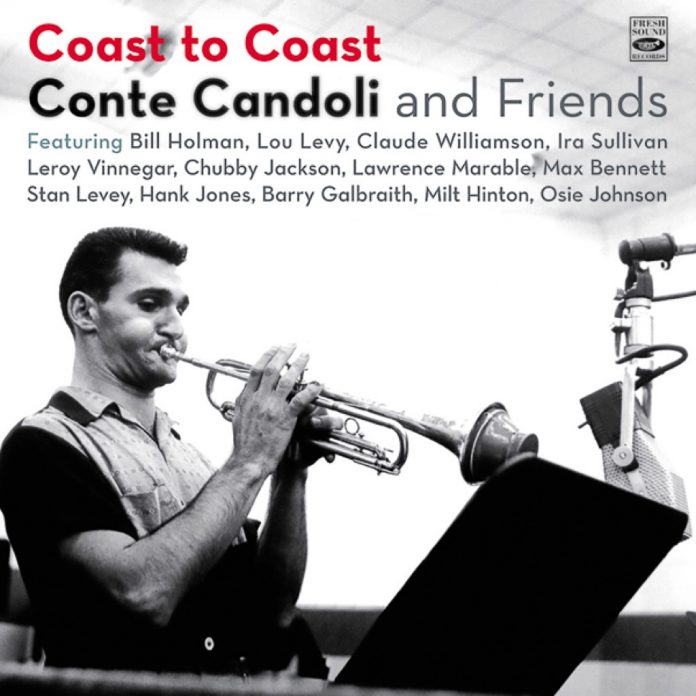 Conte Candoli, one of the very finest trumpeters of his generation, will always be associated with his stellar big band performances with Stan Kenton and Terry Gibbs among others. Later in his career he had a high-profile role with Med Flory’s Supersax. For this reissue, Jordi Pujol has collated the first four small-group recording sessions he made as a leader.

His fleet, Dizzy Gillespie-influenced virtuosity is particularly well showcased on uptempo numbers such as I’ll Remember April, I’m Getting Sentimental Over You, T.N.T. and especially Fine And Dandy. The latter had been his feature with Charlie Ventura’s Bop For The People band in 1949. It storms along at 80 bars to the minute and is a perfect vehicle for his cleanly articulated rapid-fire technique. In the last chorus the group segue into Keen And Peachy which was the contrafact Ralph Burns wrote for Woody Herman’s Second Herd in 1947.

Candoli was always a consummate ballad performer, a situation where he could give full rein to the richness of his tone, especially in the lower register. Numbers such as I Can’t Get Started, My Funny Valentine and Everything Happens To Me are good examples of this part of his musicality.

The dates with Bill Holman are a reminder of what a very fine tenor player he was. He also played good baritone (though not here) and it’s a pity that he eventually gave up performing to concentrate on his writing. André Previn once said “He was a first rate saxophonist but his true instrument is the orchestra”. Toot Suite, Jazz City Blues and Four show his Prez-inspired tenor to good advantage. The latter has been credited to Miles Davis, as usual, but Eddie “Cleanhead” Vinson is usually considered to be the composer.

Another early Candoli small-group session that is well worth tracking down is his 1960 date with Buddy Collette on Fresh Sound Records (FSR 1629).