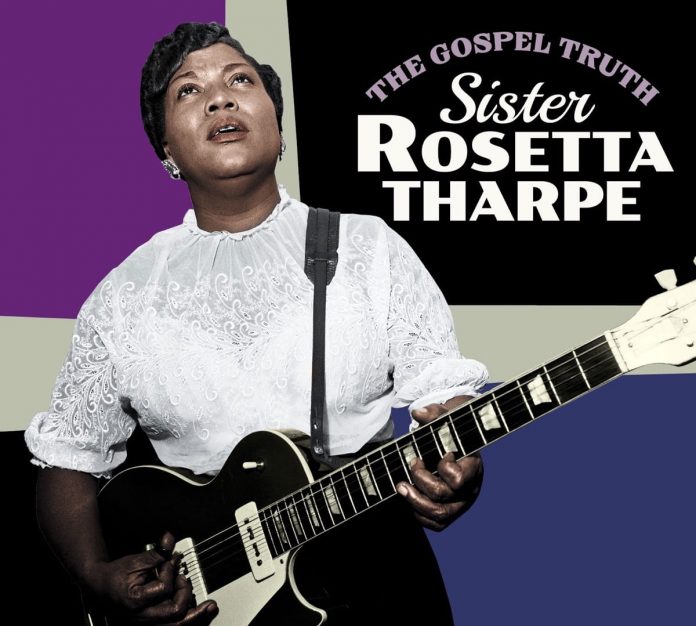 Until Mahalia Jackson came along, Rosetta Tharpe was the voice of gospel, though some of the black churches shunned her after she played in nightclubs. She’d started out, pre-school, as Little Rosetta Nubin but later took a version of her husband’s name Thorpe and stuck with that to the end. The first recordings were backed by Lucky Millinder and they were all hits, exerting a discernible influence on early rock and roll.

It wasn’t just the nightclubs that put some people off. The sight of a black woman playing an electric guitar, and making it wail, too, was too much for the gatekeepers and she found herself in an invidious position, wanting to sing gospel but contractually obliged to cover secular material as well.

Fortunately, a wave of post-war religiosity – which spread to huge multi-racial audiences thanks to the crusades (his term) of Billy Graham and others – meant that gospel was still viable. Rock and roll artists like Little Richard embraced sacred and profane and that helped, too. Johnny Cash cited her as a favourite singer.

Tharpe lacked Mahalia’s sometimes over-the-top delivery. The key to her best work is the interplay between agile vocal movement and great guitar playing, often with distortion. She didn’t just accompany; she played lead lines and solos. It’s great to have these albums available again, remastered and sounding strong and still fresh. The slightly earlier The Gospel Truth is the better of the two but there isn’t much in it. A few stray bonus tracks fill out a superb set.

Discography
The Gospel Truth: The Lord’s Prayer; One Morning Soon; Things That I Used To Do; It’s Me; I Have Good News To Bring; Didn’t It Rain; Bring Back Those Happy Days; Saviour Don’t Pass Me By; Go Get The Water; Beams Of Heaven; Steal Away; Sister Rosetta Tharpe: If I Can Help Somebody; Walk All Over God’s Heaven; I Believe; Take My Hand, Precious Lord; Faith; Twelve Gates; I Couldn’t Hear Nobody Pray; He; If You Believe; Light A Candle; Bless This House; Without Him; bonus tracks: I Saw The Light; Family Prayer; He’s The Lily Of The Valley; Oh, The Joy That Came To Me (72.02)
Tharpe (v, elg); with The Sally Jenkins Singers, unidentified rhythm section on The Gospel Truth; unidentified rhythm and vocals on Sister Rosetta Tharpe; Tabernacle Choir and Players on bonus tracks. September 1958, October & November 1959.
Hoo Doo 670103