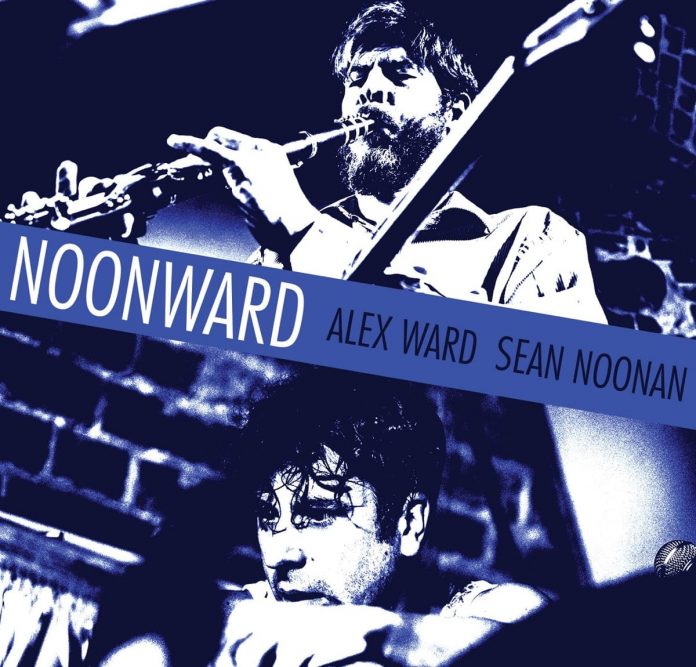 Alex Ward emerged out of the Derek Bailey circle as a free improviser of pleasingly other-worldly aspect, and it was something of a surprise when he turned to electric guitar as well as clarinet and started showing an interest in more rock-inflected situations.

Noonan, by contrast, was born eclectic and seems to fit in to almost any playing situation you could imagine for him. So it’s a pairing that might seem improbable on the surface, but utterly logical when you trace it back.

Pieces like Packed (credited to Ward) and Noonan’s Circle Of Willis conjure up dark energies and a world of sound that seems much larger than a duo which goes out with minimal electronic support. Only Ward’s guitar offers much possibility of building bigger washes of colour and that’s not how it’s usually deployed.

There isn’t much in the way of soloing in any conventional sense. Pieces seem to be made up of distinct episodes, which might be pre-determined, or might have been improvised on the spot. Whatever the case, they invariably move with great logic in a particular direction and when there is a clear melodic flow, as on Noonan’s Funnel Weaver, it’s followed full-heartedly to its conclusion.

Ward has rarely sounded better or more focused. Noonan is all bustle and energy, but there’s a stillness, too, at the centre of what he does. It’s a highly impressive showing.

Long recognised in his native Alberta (and increasingly in the rest of Canada but not yet in Europe) as an outstanding trumpeter arranger, composer...

The young Henry Grimes was beginning to make quite a name for himself as a double bass player, first in bop and then the...

In jazz history there seldom appears to be any middle ground for the violin. Fans either love it or hate it. Almost from the...

Alan Ainsworth is a photographer with specialist interests in jazz performance and contemporary architecture. His book, published in February 2022, surveys a range of...

When film music historians discuss the increasing influence of jazz on movie soundtracks through the 1940s and into the 1950s, they usually mention films...

The most immediately striking thing about Dick Morrissey's tenor playing is its tremendous swing. It is no exaggera­tion to say that the music on...

Sean Noonan, Alex Ward: Noonward"Ward has rarely sounded better or more focused. Noonan is all bustle and energy, but there’s a stillness, too, at the centre of what he does. It’s a highly impressive showing"
Advertisement