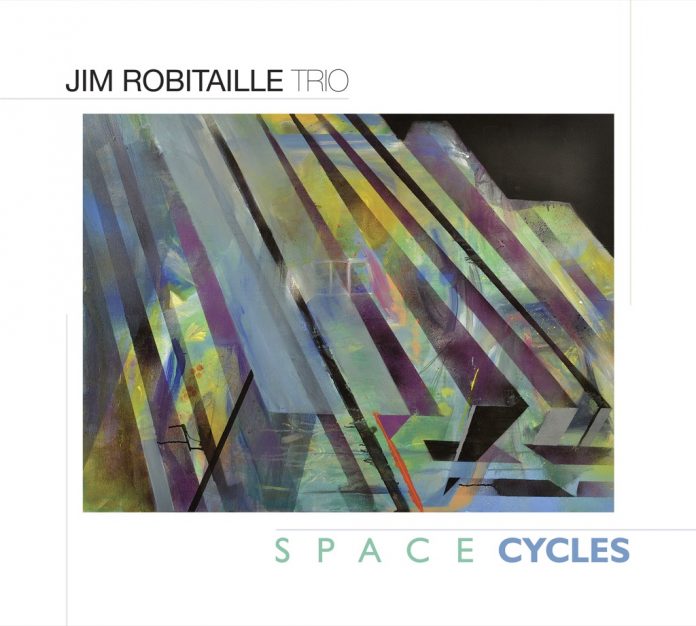 After time in a larger group, Jim Robitaille has returned to his better-known format of his spacious-sounding trio. Joined by Bill Miele on electric bass and Chris Poudrier on drums, the sounds Robitaille creates express great variety in style and mood.

He plays mostly electric guitar, with use of an acoustic nylon-string guitar for tracks When We Passed and Never Never Land. Additionally, this eighth track is one of three covers included in this album, originating from the 1954 broadway version of Peter Pan; the other two cover the jazz standard Baubles, Bangles And Beads, and the Beatles’ Here, There And Everywhere.

From the start of this album there’s an entrancing effect. Instantly the listener is at ease hearing how wonderfully the trio communicate with one another, as the music weaves between them. The title track is lively and enjoyable, with Miele and Poudrier creating adventurous rhythms whilst Robitaille produces some of the most impressive and elaborate solo lines on the whole album.

As a whole, Robitaille’s Space Cycles illustrates the trio’s capacity to play together in ways which magnify their kinship with one another’s playing. This affinity helps to generate warming and animating music, sustained throughout the entirety of Space Cycles.

Vibraphonist Roger Beaujolais has been on the British music scene for a good while – getting on for 40 years – and his musicianship...

From his initial and life-enhancing discovery of jazz, poet Philip Larkin’s love of Louis Armstrong (1901-71) was expressed in broadcasts, correspondence, record and book...

Most of the music to be heard in the first of these albums is reasonably conventional and features excellent tenor from Yusef, in the...