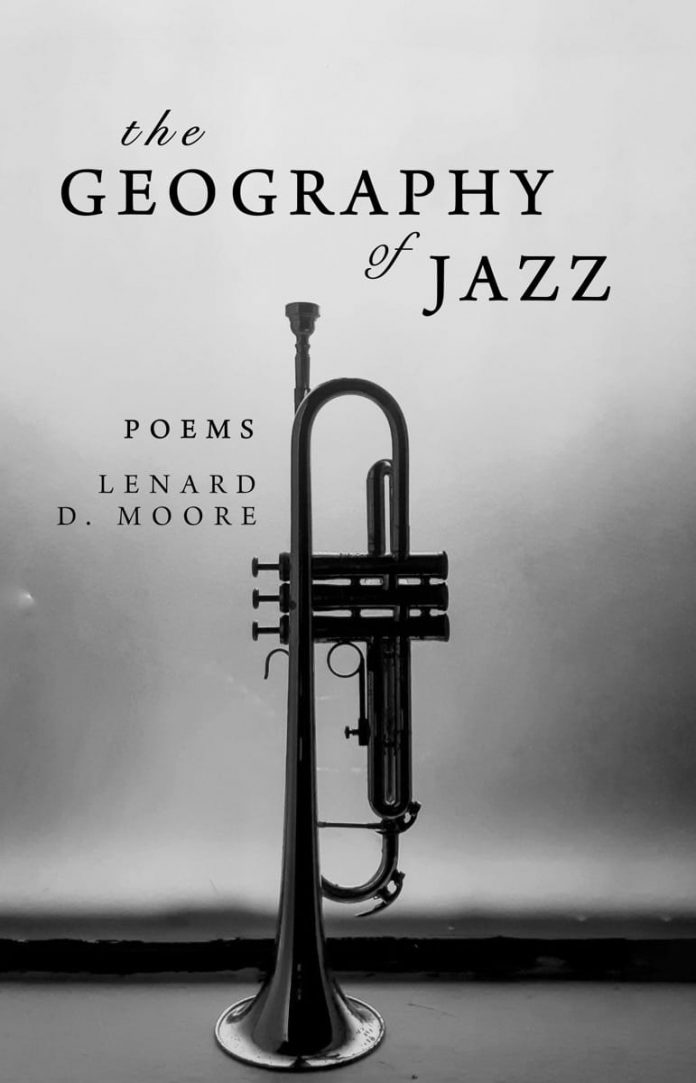 The Geography Of Jazz is collection of poems by Lenard D. Moore. Moore is an acclaimed poet, author and founder of the Carolina African American Writers’ Collective. An army veteran, he teaches African American literature and creative writing at the University of Mount Olive where he is the poet-in-residence.

Jazz and poetry make good companions. Poetry is often read accompanied by music – frequently jazz – and there is even a sub-genre of poetry called jazz poetry (pioneered by the poets Langston Hughes, Vachel Lindsay and Mina Loy); although others simply regard the term as descriptive. Jazz poetry falls into two types – those poems that imitate the freedom and improvisation of jazz and those that take the jazz scene, jazz clubs and jazz musicians as their subject matter.

Moore’s poems favour the latter, albeit he is more influenced by the traditional Japanese style of poetry known as haiku – consisting of three short lines that do not rhyme. Modern haiku is not so rigid in structure but still uses just a few words to capture a moment and create a picture for the reader to imagine. It has been described as like a tiny window into a scene much larger than itself.

Moore was the first African American President of the Haiku Society of America and his awards include the Haiku Museum of Tokyo Award. This collection also includes a new poetic form, jazzku, an innovation that recalls Japanese haiku and tanka (a genre of classical Japanese poetry).

Whilst I am not an avid reader of poetry, a collection or two is usually to be found around the house. This collection, however, will definitely be staying – combining as it does fabulous insights into the world of jazz and jazz musicians. There are poems about Ray Charles, Duke Ellington, Ramsey Lewis, Dizzy Gillespie, jazz festivals, jazz clubs and jazz instruments. Here is a tiny sample of what to expect.

Bending back
she stomps
the stage-planks
again, again
Her caftan levitates
the mike bobs
around the stand
and she scats
and she scats

I am not a poetry critic. I can’t tell you much about structure, assonance, onomatopoeia or repetition. But I can use the language of a jazz critic to tell you that the poems are evocative, sensual, personal, painful, celebratory and joyful in equal measure. They convey fabulous jazz rhythms which is not so surprising given that the formal rules of haiku are not dissimilar to those found in music. In haiku, a poem is expected to have a number of sound units (“moras”) similar to a syllable in the first, second and third lines – thus creating a standard 5-7-5 structure.

Maybe it helps to be a jazz fan in order to extract the little nuances from the poems and appreciate the subject matter, the sound of the instruments and the feel of a jazz gig. I certainly loved reading them whilst playing jazz in the background. My only regret is that there isn’t an audio version available as my own silent narrative didn’t do the poems justice. If you buy one poetry book about jazz in your entire life, this has to be it.

Derek Ansell - 21 September 2021
Toftemark spent five years working in NYC after finishing his studies there. He returned to his native Denmark in 2020 at the start of the pandemic and was given...