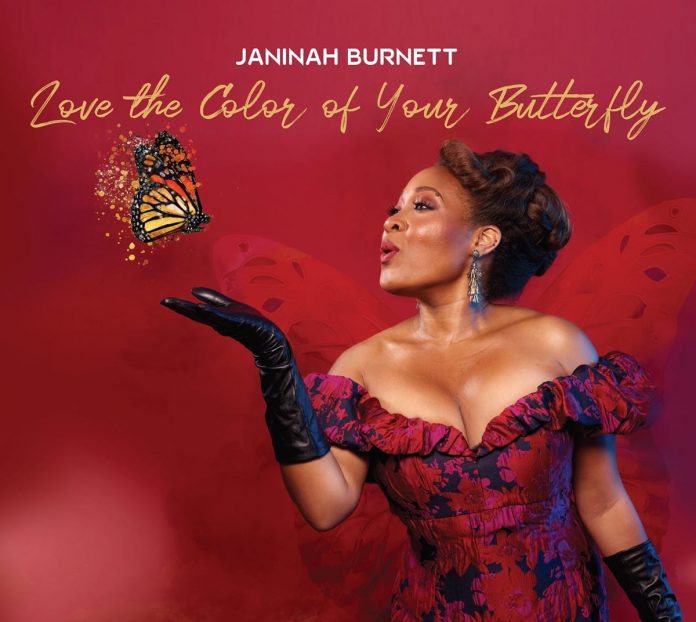 The world-renowned soprano Janinah Burnett, or as her Italian fans called her “La Janinah”, has created a fusion album like no other, showcasing her versatility as a singer and performer, through a myriad of genres including jazz, blues, soul, art song, opera and spirituals.

She describes this album as her “expression of how all the previous stages of [her] life have given way to where [she is] as an artist” crediting the great jazz singer Dianne Reeves for having the most significant impact on her vocal style. Not to mention the inspiration from her father, the legendary drummer Carl Burnett.

In combining the classical idioms she is famous for with the jazz influences she has encountered throughout her life, Burnett has coined a hybrid she calls “clazz.” Love The Color Of Your Butterfly is the first album of such “clazz”, in which Burnett, with the help of her longtime friend and award-winning drummer Terreon “Tank” Gully, has created and compiled 13 tracks of reinvented and rejuvenated classical and jazz classics.

Some highlights from the album include an extremely inventive and eclectic blending of Porter’s What Is This Thing Called Love with Bizet’s Habañera. Burnett’s vocals move across the genres with such ease that she makes this seem an obvious and natural hybrid. The three Ellington additions – My Love, In A Sentimental Mood and TGTT – are sensual, sacred and playful. Likewise, Lament / Strange Fruit maintains the latter’s sombre depiction of lynching while providing a real storytelling aspect that sits well next to the haunting melody.

Whilst not all jazz aficionados will love the classical and operatic repertoire, this album effectively bridges the two genres and any boundaries between them. Burnett has brought the playfulness and improvisational character of jazz to opera, and the dramatic poise of opera to jazz.

John White - 26 May 2022
Jelena Ana Milcetic – aka Helen Merrill – born in New York in 1930 to Croatian immigrant parents, was to have a long and distinguished career as a jazz...